Shares of Under Armour (UAA -3.40%) (UA -3.06%) jumped on Tuesday after the maker of athletic apparel delivered a strong third-quarter earnings report.

Under Armour's revenue rose 8% year over year to $1.5 billion, fueled by strong growth in international markets. The gains were broad-based, with wholesale revenue rising 10% to $911 million and direct-to-consumer sales growing 12% to $604 million.

CEO Patrik Frisk said the company's focus on innovation and revamped marketing campaigns are helping to strengthen its connection with people seeking to boost their fitness and athletic performance.

"Our third-quarter results were driven by strong demand for the Under Armour brand and our ability to execute quickly to meet the needs of our consumers and customers," Frisk said in a press release. 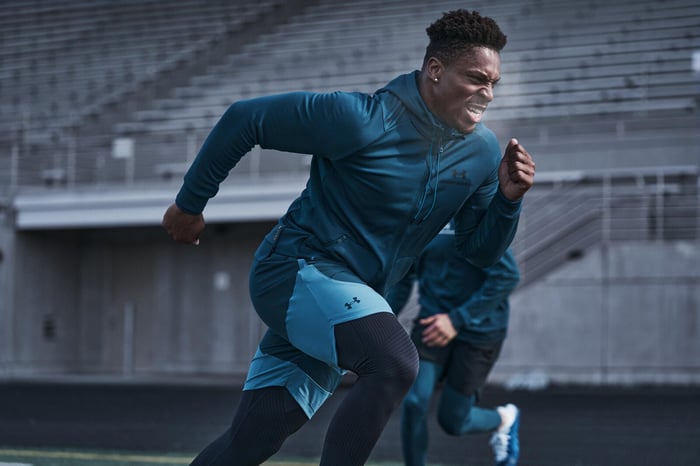 Under Amour's apparel is proving popular among athletes and fitness enthusiasts. Image source: Under Armour.

Better still, Under Amour's restructuring and reduced discounting are helping to improve its profitability. Its gross margin expanded by 3.1 percentage points to 51%, which, when combined with its revenue gains, drove a 42% increase in adjusted operating income, to $189 million.

All told, Under Armour's adjusted earnings per share checked in a $0.31. That was more than double the $0.15 per share Wall Street had expected.

These strong results and ongoing positive sales trends prompted Under Armour to raise its full-year guidance. Management now expects revenue to surge 25% in 2021, compared to its previous estimate of a "low-twenties percentage increase." The company also lifted its forecast for adjusted operating income and earnings per share to $475 million and $0.74, respectively, up from prior ranges of $340 million to $350 million and $0.50 to $0.52.