Office tenants continue to relocate and expand in this part of the country.

Reports of the death of the office have been greatly exaggerated, at least in one region of the country. Office space in the Sun Belt region is a hot commodity these days. That was clear from office REIT Cousins Properties' (CUZ -0.88%) third-quarter report.

Here's a closer look at Cousins' quarter and what's ahead for the office REIT. 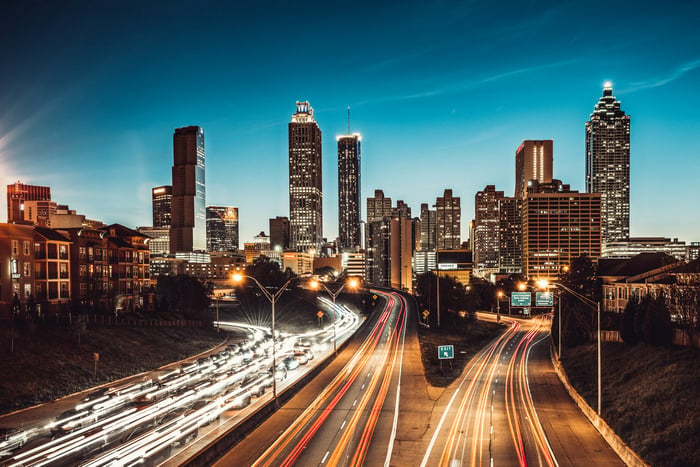 Space in these offices is in high demand

Cousins Properties focuses on owning Class A office properties in some of the fastest-growing metro areas across the South. That strategy paid big dividends during the third quarter. Cousins signed nearly 600,000 square feet of leases in the period, with rental rates on second-generation leases coming in a scorching 23.1% above the rates of leases they replaced. Cousins noted that this represented the largest increase in that metric in nearly six years.

The big driver of rapidly rising rental rates across the South is growing demand from tenants relocating or expanding into the Sun Belt region. Cousins noted that 84% of the leases it signed in the period were for new or expansion space. For example, Cousins signed a lease with credit card giant Visa for 123,000 square feet at a building in Atlanta. That will allow Visa to establish a permanent office presence in the fast-growing city. That space became available because the current tenant, railroad giant Norfolk Southern, is moving into a new headquarters in the city developed by Cousins.

CEO Colin Connolly commented on this trend in the earnings release. He said: "Looking forward, demand for new, efficient, and highly amenitized office space in our Sun Belt markets continues to accelerate, and we have assembled a portfolio that is in a terrific position to meet this demand."

Wheeling and dealing to enhance its portfolio

As Connolly noted, Cousins Properties' existing portfolio is in an excellent position to benefit from the continued relocation and expansion of companies in the Sun Belt region. However, that's not stopping it from making moves to enhance its ability to capture this demand. Over the past few months, the company unveiled several transactions to bolster its existing position and set it up for future growth. These included:

Cousins also sold two properties in Charlotte, North Carolina, and a land parcel in Phoenix. These deals brought in a combined $338.7 million, giving it the funds to finance some of its recent investments.

With the addition of Neuhoff, Cousins now has five projects in its development pipeline across Nashville; Austin, Texas; and Phoenix. They should combine to add $64 million of annual net operating income (NOI) upon full stabilization in 2025. That's a meaningful increase for a company that has produced $370 million of NOI through the first nine months of 2021. In addition to that, Cousins' growing land bank could support another 5.1 million square feet of future developments. That's significant long-term growth potential, given the company's current 19.1 million square foot portfolio.

Offices in these locations remain in high demand

Location is a crucial factor for success in real estate investing. Right now, the Sun Belt region is a red-hot location for office demand, enabling Cousins Properties to secure big-time rent increases. Meanwhile, given its development pipeline and growing land bank, it's in an even better position to benefit from future growth. Those factors position Cousins to potentially create a lot of value for its investors in the coming years.

Want to Get Richer? Invest In These 3 Stocks and Wait 10 Years

You Won't Want to Miss This Dividend Stock's Bright Future