No need to obsess over sending celebrities into space when Rocket Lab is quietly diversifying its business model for enhanced profit potential.

Before SpaceX, and certainly before Blue Origin, Wall Street was abuzz over Virgin Galactic Holdings (SPCE -2.30%). Indeed, this company can be credited with the proliferation, or at least the popularization, of the space tourism industry. Yet informed investors might wonder whether Virgin Galactic's apparent leadership position in the privatized space race hinges on the company actually having the best track record, or on founder Richard Branson's prowess as a hype man. Rocket Lab USA (RKLB -7.34%) might not steal Branson's thunder, but it could threaten to steal Virgin Galactic's market share. Whatever Rocket Lab lacks in hype and hoopla, it makes up for with results. 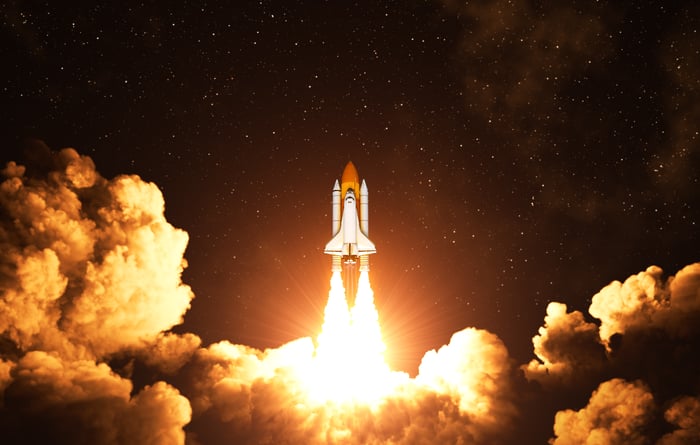 Branson did get into space on July 11, but beyond that milestone, Virgin Galactic's brief history has been marred with issues, with flights repeatedly aborted, postponed, or plagued with problems. The company's already faced FAA scrutiny and pushed back commercial flights until at least the fourth quarter of 2022.

Meanwhile, as Deutsche Bank analyst Edison Yu points out, Rocket Lab's track record is quite good: Out of 21 launches to space, the company has succeeded 19 times, so it's a success rate of over 90%.

Rocket Lab is no newcomer to the space-mission biz. Headquartered in Long Beach, California, Rocket Lab was founded back in 2006 and staged its first orbital launch in January of 2018. While the company's focus has expanded beyond this (as we'll soon explore), Rocket Lab's business model primarily consists of designing/building and/or fixing spacecraft for private businesses and government organizations.

Among Rocket Lab's proudest productions are the Photon satellite platform and the Electron series of small-orbital launch vehicle. The Electron is particularly distinctive -- right now, it's the industry's only reusable small-launch vehicle, with a host of features that make it more flexible, capable, and useful for deploying satellites.

If anything puts Rocket Lab ahead of Virgin Galactic, it's the company's ability to execute with consistency. Impressively, Rocket Lab launched three missions in the first half of 2021, followed by a fourth in July 2021. Those missions brought the total number of Electron vehicle launches to 21 as of early September, with the Electron launch vehicle having deployed 105 total satellites to orbit.

On the fiscal front, Virgin Galactic generates minuscule revenues: $571,000 during the first half of 2021, to be exact. Moreover, the company's net earnings loss widened from around $72 million in Q2 2020 to a stomach-churning $94 million during this year's second quarter.

Not that Rocket Lab is doing any better, when you dig beneath the surface. During 2021's first half, Rocket Lab generated $29.5 million in revenues, and expanded its gross margins from -67% to +13%.

But then, the details of exactly how Rocket Lab garnered those revenues are a bit murky. In H1 of 2021, revenues included $24.1 million in "Launch" income (vague enough for you?) and $5.4 million in Space Systems revenue.

Moreover, Rocket Lab's bottom-line results are going in the wrong direction: a net loss of $32.6 million in H1 2021, steeper than the $23.5 million it lost in the year-ago period.

For the most part, Virgin Galactic's revenue stream (paltry as it is) relies on ticket sales, while Rocket Lab offers a surprisingly diversified investment. Notably, Rocket Lab increased the diversity of its revenue during 2021's first half, with the company's Space Systems segment contributing 18% of total revenue, compared to 3% in the prior year -- and with healthy gross margins of 65%, to boot.

Likely contributing to the company's plump gross margins is Rocket Lab's ongoing commitment to cost containment. In particular, Rocket Lab's vehicle cost per launch shrank from $8,246 in 2019, to $6,557 in 2020, and diminished further to $5,491 in 2021's first quarter. It's tough to draw comparisons here, since Virgin Galactic remains elusive about its vehicle cost per launch -- though the company doesn't seem to mind charging $450,000 per seat to hitch a ride.

Another differentiator is Rocket Lab's forays into some intriguing niche markets, including:

Meanwhile, Rocket Lab is quietly making a broad range of potentially lucrative deals. Its stakeholders will now have an opportunity to bear witness as the company's variegated acquisitions and partnerships play out. Will integrating IoT technology and spending $40 million-plus on a space-software business help to improve Rocket Lab's worsening bottom-line results? Furthermore, will the company offer a precise breakdown of how these recently added segments (and the old ones too, for that matter) are contributing to Rocket Lab's revenue count?

Providing satisfactory responses to these concerns in the coming quarters should make Rocket Lab significantly more attractive to prospective investors. If you choose to own the shares, you could be exposed to much more than the privatized space race that Virgin Galactic seems fixated upon -- and for cautious investors, that's not necessarily a bad thing.