Shares of Rocky Brands (RCKY 1.30%) plunged today after the small-cap maker of premium boots and other footwear posted underwhelming results in its third-quarter earnings report. 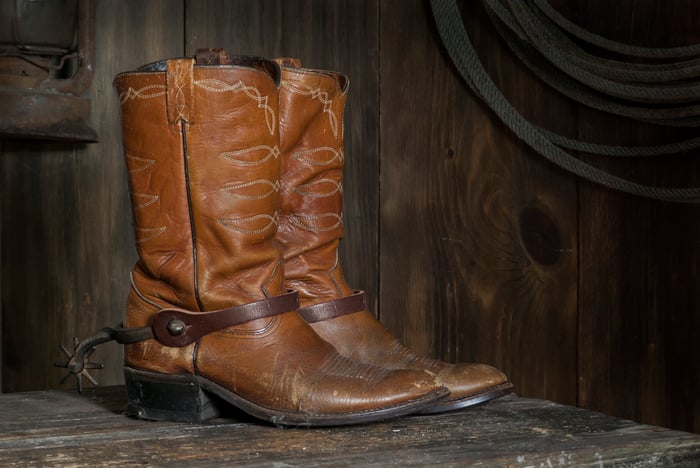 Rocky Brands' results badly missed estimates due to fulfillment challenges related to the acquisition of several boot brands from Honeywell earlier this year, which the company refers to as the Boston Group. Because of the acquisition, inbound inventory tripled at its Ohio distribution center, which complicated its warehouse operations.

Revenue in the quarter jumped 61.4% to $125.5 million, which was well short of analysts' consensus estimate of $151.6 million. Backing out the Boston Group acquisition, revenue increased 7.8%.

The distribution center issues hit the company on the bottom line: Operating income fell from $9.7 million in the quarter a year ago to $2.8 million, and it reported adjusted earnings per share of $0.34, compared to $1.04 in the prior-year period. Analysts were expecting EPS of $1.37.

CEO Jason Brooks said, "We continued to experience robust demand for our portfolio of leading brands during the third quarter. After moving the recently acquired Boston Group's inventory to our Ohio distribution center in mid-August, and receiving record inbound supply in preparation for a strong finish to the year, we encountered unanticipated fulfillment challenges that are temporarily hindering our ability to deliver a portion of orders on time."

It's important to understand that Rocky Brands' issues are separate from the global supply chain crunch that is hampering most consumer goods businesses. In fact, the company does its manufacturing in the Caribbean, insulating it from some of the challenges others are facing, like factory shutdowns in Southeast Asia and port delays in Los Angeles.

The headwinds for Rocky Brands look temporary, and its Reno distribution center opened in early October, giving it additional capacity. For the fourth quarter, the company called for revenue of $155 million-$165 million, worse than the consensus at $172 million, which indicates it will continue to experience some impacts from its fulfillment issues.

Still, the challenges it's facing should be fleeting and demand is strong. Over the long run, today's sell-off could prove to be a smart buying opportunity.