Sprouts has better financials than its peers, and its valuation is far too cheap.

While niche grocery chains don't have nearly the buzz of today's high-flying tech companies, intelligent capital allocation coupled with cheap valuations can generate attractive returns for all investors. And that's exactly what Sprouts Farmers Market (SFM 1.81%) brings to the table. 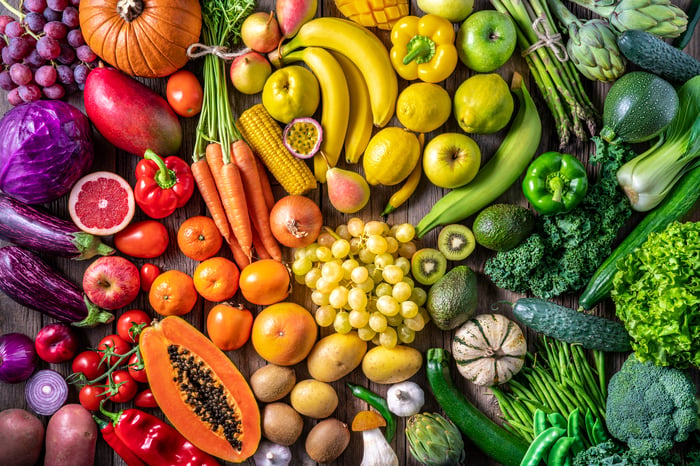 Although the grocery industry is hypercompetitive, Sprouts Farmers Market serves a more specialized niche than the standard grocery chains.

The goal of a Sprouts Farmers Market store is to mimic the experience of attending an actual farmers market. The company tries to invoke this feeling through its low-shelf displays and a focus on fresh produce and diet-specific items, instead of name-brand packaged goods. Sprouts sources its products from hundreds of different suppliers throughout the country and self-distributes nearly all of its produce to help ensure quality and freshness.

The company also prides itself on its ability to maximize sales within a smaller store format. For reference, its current average store size ranges between 28,000 and 30,000 square feet with plans to further reduce the size of its new stores by about 20%. This is significantly smaller than some other publicly traded grocery companies like Kroger and Walmart, which both have average store sizes of more than 60,000 square feet.

Thanks to the combination of its smaller store sizes and its focus on delivering high-quality items and not just being the low-cost provider, Sprouts generates a higher gross margin than nearly all of its peers. Kroger, Walmart, Natural Grocers, and Weis Markets each have gross margins of 32% or lower, whereas Sprouts boasts 37%.

After new management took over at Sprouts in 2019, the company laid out a strategic roadmap to grow its store count. However, before it was able to start popping up new locations, two areas of improvement needed to be addressed: the balance sheet and distribution.

At the end of 2018, the prior management team left Sprouts with $453 million in long-term debt and only $2 million in cash and equivalents on its balance sheet. The focus on store growth at any cost and appealing to any and all customers was beginning to take its toll. However, the current CEO Jack Sinclair has since turned things around. Today, Sprouts carries 43% less long-term debt and more than $220 million in cash and equivalents -- a significant improvement in less than two and a half years.

Additionally, the old model of sporadic store growth led to less sufficient supply chain operations, which resulted in lower-quality produce. To help solve this problem, Sprouts made it a priority to get all of its stores within 250 miles of a distribution center (DC). During the most recent quarter, the company took big strides toward meeting that goal by opening up two new DCs in Colorado and Florida, which now puts 85% of its stores within its target distance.

The company has also intentionally drifted its focus away from coupon clippers and toward higher-value, recurring customers. This has helped Sprouts' operating margin improve from 4.3% in 2018 to 5.5% in the most recent quarter.

Thanks to this myriad of structural improvements, Sprouts is now better equipped to handle its planned 10% store count growth starting in 2022. This goal was reiterated on the latest earnings call, when Sinclair said, "our real estate pipeline remains strong and we continue to work toward our 10% unit growth goal in 2022."

While the various operational changes have made the outlook for the business much more attractive, the company's dirt cheap valuation should have investors even more excited.

Though grocery companies tend to trade at below-average multiples to begin with, Sprouts' valuation is well below its peers. Here's how its price-to-trailing-12-month operating income ratio -- which compares its market cap to profits from operations -- shakes out versus its competitors.

But it's not just the investment community that has taken notice of this undervaluation; management has too. Earlier this year, Sprouts Farmers Market's board of directors approved a $300 million share repurchase program and the company has already exhausted more than one-third of it.

At Sprouts' current market cap of roughly $2.5 billion, its $300 million buyback program would increase shareholders' claim to the company's earnings by 12%. All in all, the combination of Sprouts' differentiated customer experience, its expected store count growth, and its excessively cheap valuation point to quite a bright future for shareholders.

3 Value Stocks That Are Screaming Buys in October
397%