Election Day in the U.S. spurs hope for the future opening of a massive new market.

Canadian cannabis stocks surged on Wednesday, the day election results were announced in the United States. Shares of Tilray (TLRY -4.48%), OrganiGram Holdings (OGI -1.42%), and Hexo (HEXO) all jumped between 5% and 8.5% early in Wednesday's session as investors saw new results from U.S. voter referendums on marijuana legalization. The stocks pared some of those gains, but as of 3 p.m. EDT, each remained higher as shown below:

Voters in Pennsylvania's largest city overwhelmingly approved a ballot measure yesterday seeking to push Republican state legislators to fully legalize recreational marijuana. More than 70% of voters in Philadelphia supported a ballot question that is not legally binding, but was meant to show the state government voter support to legalize adult-use recreational marijuana. 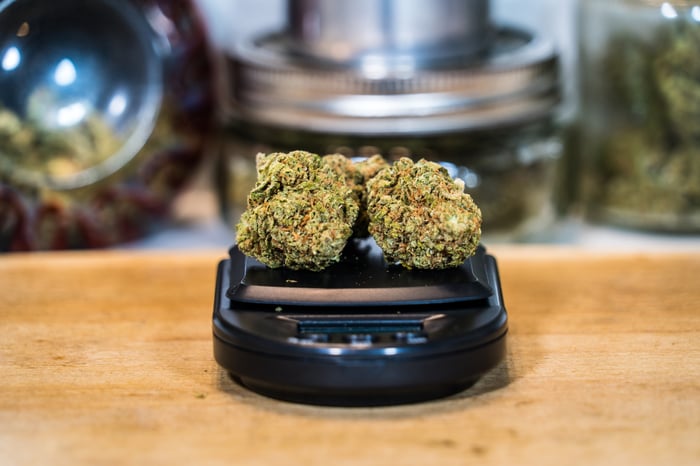 With 19 states already having legalized weed, adding Pennsylvania would seemingly be another boost toward the trend that could ultimately lead to legalization at the federal level. That would bring a potential windfall for Canadian companies that have been posturing their businesses to take advantage of that outcome.

Canadian companies like Tilray have made no secret of their intentions to ultimately move into the U.S. market once federal legalization occurs. Tilray CEO Irwin Simon has laid out his company's plan to grow the business to one with an annual revenue base of $4 billion by the middle of calendar year 2024. For perspective, when the company announced its most recent quarterly financial update last month, it reported net revenue of $168 million for the three-month period ended Aug. 31.

But a key part of Simon's plan is to leverage a U.S. consumer packaged goods platform that it has built through the acquisitions of SweetWater Brewing and Manitoba Harvest, a hemp, cannabidiol (CBD), and wellness brand. The company plans to sell cannabis through that infrastructure once marijuana is legal at the federal level. Simply put, Simon's vision won't come to fruition without that legalization development.

For Canadian cannabis companies, that vote is just another in what they consider an inevitable wave toward federal approval. That still has a long way to go, however, but each step toward that goal in the U.S. brings potential for the Canadian companies like Tilray, OrganiGram, and Hexo to prosper in the future. That seems to be enough to have investors buying today.