Chegg (NYSE:CHGG), a leading educational technology company, delivered a disappointing third-quarter earnings report after the market closed on Monday. Last year, the company benefited at the onset of the pandemic when millions of students shifted to remote learning. After losing access to on-campus resources, many of those students turned to Chegg for help with their classwork.

In the most recent quarter, that trend was playing out in reverse. As more of the population got vaccinated throughout the year, colleges and universities asked students to return to campus for in-person lectures. But many students chose to take fewer courses or not register for classes at all instead of attending in person. 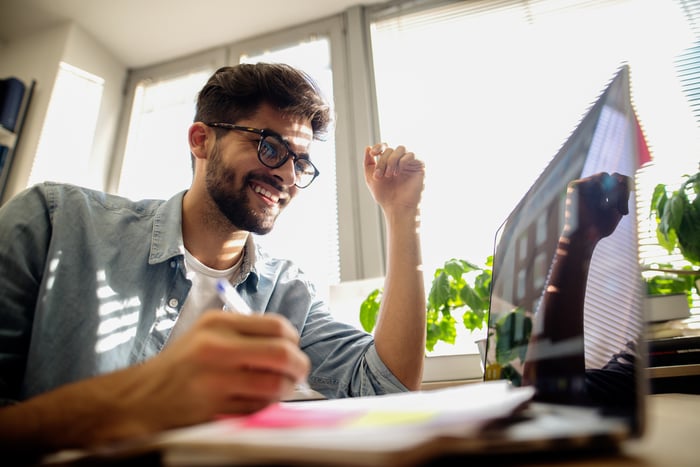 Interestingly, Chegg reported revenue of $172 million in Q3, a 12% increase year over year. That was slightly below analysts' consensus estimate for revenue of $174 million. But that was only the beginning of the bad news. The company significantly lowered its forecasts for revenue and adjusted earnings before interest, taxes, depreciation, and amortization (EBITDA) for the full year.

The midpoints of its new target ranges are $763 million for revenue -- down from $810 million -- and $256 million for EBITDA -- down from $297.5 million. Those are substantial cuts considering there is only one more quarter left to report in the year.

Here's what Chegg CEO Dan Rosensweig had to say on the cause:

A combination of variants, increased employment opportunities and compensation, along with fatigue, have all led to significantly fewer enrollments than expected this semester. And those students who have enrolled are taking fewer and less rigorous classes and are receiving less graded assignments. We believe this is a post pandemic impact that will affect this school year but is not sustainable for higher education long term. Learning sites and apps, both free and paid, in the U.S. and Canada have experienced significantly reduced traffic since the fall semester began.

Investors always had concerns that this company might experience headwinds when campuses reopened, but these are worse than expected. The worry was that students who were learning on campus would have less of a need for Chegg's online services. A drop in higher education enrollment was not the primary risk on investors' minds.

Chegg will take the opportunity to buy back its stock

The outcome was nearly a worst-case scenario for Chegg, and traders responded accordingly, bidding the stock down by 25% in after-hours trading. Chegg's board of directors authorized the company to buy back an additional $500 million worth of shares, perhaps in anticipation of the markets' negative response.

The company believes this crash in its stock price will be temporary and plans to repurchase its stock opportunistically. Its total buyback authorization is now $1 billion -- close to 20% of the company's market capitalization as of the end of trading on Tuesday. If the price falls much further, long-term investors may want to follow management's lead and start picking up shares of this beaten-down growth stock.