Its first earnings report as an independent company provided plenty of reason for excitement.

GXO Logistics (GXO -1.49%) released its first quarterly report as an independent company, and investors liked what they heard. Shares of GXO traded up more than 10% for the week, as of midday Thursday, on excitement about the company's potential for growth.

GXO was spun out of XPO Logistics (XPO -0.29%) in August to give investors access to more of a pure-play supply chain management and warehousing company. GXO provides warehouse management, shipping, returns, and other services for a range of e-commerce and omnichannel retailers and other industries. 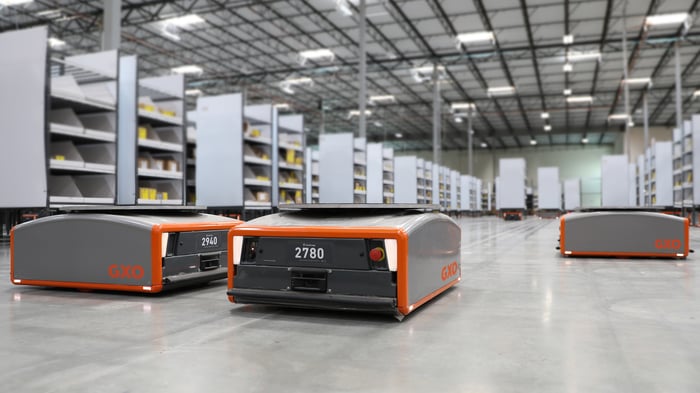 The company came out of the gate strong in its first earnings release. On Nov. 1, GXO reported third-quarter adjusted earnings of $0.56 per share on revenue of $2 billion, surpassing expectations for $0.51 per share in earnings on sales of $1.82 billion. The company also raised its full-year 2021 revenue guidance by $100 million to $7.6 billion to $7.8 billion, and provided a slight boost to its full-year adjusted forecast for earnings before interest, taxes, depreciation, and amortization (EBITDA).

In a statement, CEO Malcolm Wilson said GXO is poised for growth, saying the sales pipeline at the end of the quarter had reached a record level.

"In the third quarter, we won new customer contracts with an aggregate lifetime value of over $1 billion, positioning us well to deliver on our expected 2022 organic revenue growth of 8% to 12%," Wilson said. "Our revenue retention rate has improved through 2021 versus the number reported at our investor day, demonstrating our customers' loyalty to GXO's value-added solutions."

The value proposition GXO offers is pretty simple: Warehousing and logistics expertise is becoming increasingly complex, and vital, in a multichannel retail world, and customers including Nike and Apple are finding it easier to outsource the operation to an expert instead of developing it internally.

GXO is an industry leader, but still has a small fraction of a market that is estimated at $130 billion today and is rapidly growing as more companies decide to outsource their logistics instead of operating in-house. In its first quarterly presentation as an independent, the company laid out its growth potential well, and investors this week were eager to hop aboard and go for the ride.

3 Hidden Stocks That Could Make You a Fortune

Is GXO Logistics Stock a Buy?

Down 30%, This Growth Stock Could Be Set to Soar

How GXO Logistics Is Beating Inflation
397%