Please ensure Javascript is enabled for purposes of website accessibility
Log In Help Join The Motley Fool
Free Article
Join Nearly 1 Million Premium Members And Get More In-Depth Stock Guidance and Research
By Will Ebiefung – Nov 5, 2021 at 8:00AM

The meme token's breathtaking rally could end in tears.

If you put $100 in Shiba Inu (SHIB 0.09%) when it launched in August 2020, you are likely a millionaire now. And if you bet $10,000, you are now one of the wealthiest people on earth (assuming you could cash out without tanking the price). Up roughly 60,000,000% since inception, Shiba Inu's rally defies imagination, and it is sure to trigger regret and fear of missing out (FOMO) in those who missed the bull run.

But investors shouldn't let emotions cloud their judgment by rushing into a high-risk investment. Shiba Inu has all the hallmarks of a speculative bubble, which means it could fall as quickly as it rose. Let's explore the reasons why this meme crypto token could crash. 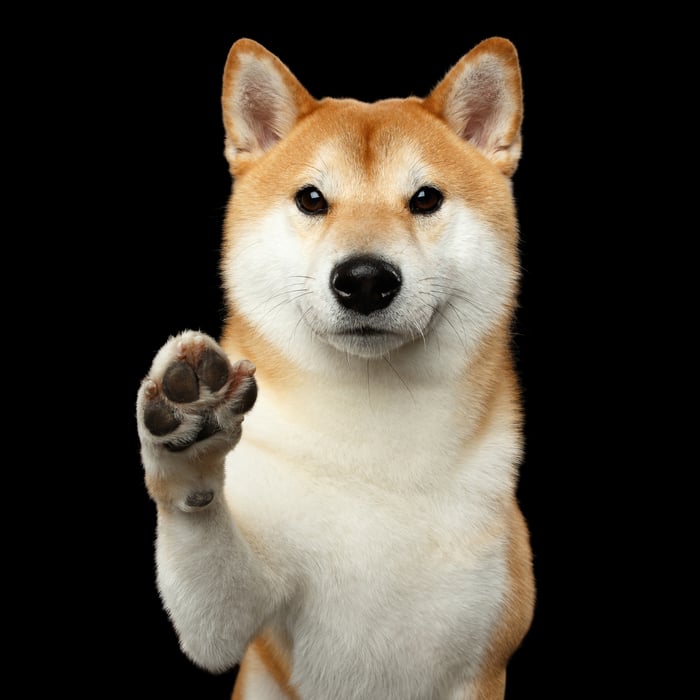 1. Shiba's valuation is not based on fundamentals

Up roughly 700% in the last 30 days, Shiba now boasts a market cap of $36 billion. This valuation makes it the ninth largest cryptocurrency ahead of Dogecoin (worth $35 billion). But unlike publicly traded companies that generate profits and cash flow, investors have no real way to evaluate or compare Shiba's market cap. And the token doesn't introduce any game-changing technical innovations that would justify its inflated price tag.

Shiba Inu is one of over 460,000 ERC20 tokens programmed on the Ethereum blockchain. This means it faces the technical shortcomings of Ethereum, such as a low transaction capacity (13 per second) and an energy-consuming proof-of-work consensus mechanism whereby miners solve puzzles to validate transactions.

Ethereum's developers plan to address these challenges through an upgrade called Ethereum 2.0. But it is unclear when these changes will go live. And other blockchains such as Solana have already addressed many of Ethereum's shortcomings through an innovative proof-of-work mechanism (miners validate transactions by using existing tokens) capable of handling 50,000 transactions per second.

Shiba Inu's developers are trying to set their token apart from Dogecoin and other meme cryptocurrencies by expanding the network's functionality and creating additional Shiba Inu-based tokens.

The project's whitepaper claims its decentralized exchange (which allows users to trade tokens without a centralized intermediary), ShibaSwap (CRYPTO: BONE), is "poised to become the most popular and highest volume exchange" when Ethereum 2.0 improves transaction capacity. But the document provides little information about how ShibaSwap will achieve this goal -- or what makes it better than other Ethereum-based decentralized exchanges, aside from branding.

According to data from coinmarketcap.com, Uniswap is currently the most popular decentralized exchange -- with ShibaSwap ranking in 15th place.

Coinmarketcap doesn't cite any unique feature of ShibaSwap aside from the fact that all its functions are "dog-themed" and named differently than they would be on a regular exchange. And with a typical holding time of just ten days on Coinbase (compared to 77 days to 78 days for Bitcoin and Ethereum), it seems like most Shiba Inu investors are looking for a quick flip instead of a long-term investment. They may not be interested in taking advantage of the features offered by complementary platforms like ShibaSwap.

This is a risky time for crypto investors

It's tempting to bet on speculative meme coins after watching other investors net life-changing returns in short periods. But FOMO is a dangerous emotion because latecomers are more likely to be left holding the bag when the bubble pops. No one knows when (or even if) Shiba Inu will crash. But with its stratospheric valuation and lack of competitive advantages, it might just be a matter of time.