Inflation is real, but is it a real threat? That's the question with a company like P&G.

Wall Street and the broader media have a bad habit of taking a story and hyping it up to such a degree that it distorts investor views and actions. The internet stock bubble and the housing bubble are big examples, but there are also smaller ones like the Y2K bug that amounted to nothing at all despite all the headlines and coverage.

Inflation is likely to be another big story that doesn't actually turn out to be as bad as feared. Consumer staples company Procter & Gamble (PG -0.71%) is a great example of why that's likely to be the case. Let's take a closer look:

A headwind, for sure

Inflation can't simply be brushed aside. It is a notable problem and it is increasingly evident to consumers as they buy everyday products they need. During Procter & Gamble's fiscal first-quarter 2022 earnings conference call, management made a point to say that "inflationary pressures are broad-based and sustained." The company is seeing rising costs for shipping, labor, and materials. It's also witnessing situations in which labor constraints are making it difficult to deliver products in a timely fashion. The impacts of inflation are very real.

P&G even highlighted that "significant commodity cost increases" were a headwind that could derail its full-year 2022 guidance. The key word there is "significant" since management is obviously aware that costs are going up and has included this in its budgeting process. Still, it's likely that margins will be under pressure this fiscal year. Notably, P&G's gross margin fell 370 basis points in the first quarter. That will likely remain an issue throughout the year, and investors should be monitoring this trend.

However, it would be ridiculous to suggest that Procter & Gamble, which has increased its dividend annually for 65 consecutive years, hasn't had to deal with pricing headwinds before. You simply don't achieve Dividend King status without facing adversity, and inflation is a pretty normal part of the economic cycle.

This is where some positive information needs to be considered. For starters, Procter & Gamble is instituting price increases. That's how companies adjust for inflation -- by passing costs on to customers. It has also been working to cut costs. These efforts, however, tend to lag behind inflation. That's just how the industry generally works.

But here's the really interesting thing: When you dig a little into Procter & Gamble's fiscal first-quarter 2022 results, pricing was a benefit across most of its portfolio, but so was volume. In the company's beauty segment, for example, volume was flat but price increases added two percentage points to organic sales. In other words, despite higher prices, consumers continued to buy P&G's makeup and skin care products.

Meanwhile, in the company's grooming segment, organic sales were up 4%, helped by product mix (1%), price increases (2%), and volume (1%). Reading into those numbers, despite higher prices, consumers bought more and higher-margin (and likely more expensive) products. 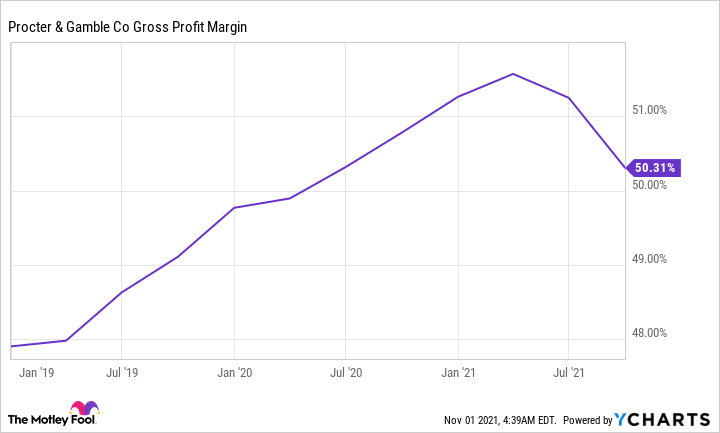 The fabric and home division saw organic sales rise 5%, driven by pricing and product mix (together 3%) and volume (2%). Again, consumers kept buying despite higher prices. The healthcare segment had an even better showing with organic sales up 7%, helped by pricing (1%), mix (3%), and volume (3%). Clearly, across a material portion of its businesses, Procter & Gamble is having great success in its efforts to increase prices without impacting sales.

The only business where there was a break in trend was the baby and feminine care division. Organic sales were higher by 2%, helped by product mix (2%), volume (1%), but price detracted one percentage point. Basically, Procter & Gamble hasn't been able to push through price increases here, but consumers seem to be migrating to higher-margin products. That still bodes fairly well for the future.

To be fair, the data here is from a single quarter, so you can't really make massive calls based on this information. However, for a company that has lived through inflationary periods before, Procter & Gamble clearly knows what it is doing and is working with a well-tested playbook. Notably, it has a long history of using innovation to convince consumers that it is worth paying more for its products.

So far, this appears to be working, and long-term investors probably shouldn't get too upset about the near-term headwinds from inflation even if it picks up over the next few quarters. Eventually, this too shall pass -- and it's not worth jumping ship here for what is likely to be a transitory concern.