GitLab has enjoyed the popularity that comes with an IPO, but is it worth your money?

There have been over 885 companies that have come public via initial public offering (IPO) in 2021 as of this writing, which can be hard to sift through. In the middle of the craze, it can be difficult to find the stocks that shine through as more than short-term picks.

Was this justified? Does GitLab deserve a spot in your portfolio? Here's everything you need to know about GitLab and whether it's deserving of your money today. 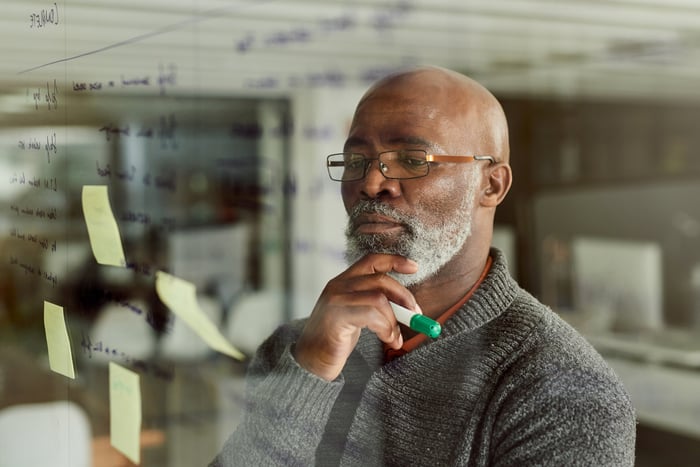 When it comes to software development, developers sometimes struggle to meet the rapid demand of customers, primarily due to the complexity of their jobs. One part of this complexity is that developers use different solutions on different parts of the software building journey. To plan software development, a developer team might use one tool, but to build it, they might use another. This increases errors in code when moving from tool to tool. When developer teams work together on the same project, this process is even more convoluted.

GitLab is focusing on creating solution that helps developers plan, build, deliver, and monitor software together all from one tool, increasing efficiency while minimizing errors in code. The company has built these tools on Git -- an open-source project software -- that is free for anyone to use, so GitLab can offer a free tier to its service. In this free tier, users get the basic capabilities needed to do their daily jobs. GitLab then has the opportunity to expand its relationships with its Premium and Ultimate subscriptions.

The company believes that its opportunity is massive: GitLab estimates its current market opportunity to be $40 billion, but that it could expand to $55 billion by 2024. With just $196 million in trailing 12-month (TTM) revenue, GitLab is far from realizing its full potential. The company has already attracted customers like Nvidia (NVDA 3.12%) and the U.S. Army, both of which could help the business reach its long-term goals.

The company's customer growth and retention are impressive. Among its paying users -- users paying for the Premium or Ultimate plans -- customer churn is just 3% and the company's net revenue retention rate is 152%. Customer count grew 32% since the start of the year to 3,632, and its customers spending over $100,000 grew 35% to 383.

These strong customer relationships GitLab has built have resulted in strong financial growth. In the first six months of 2021, the company made almost $108 million in revenue, with almost $94.5 million of that becoming gross profit -- resulting in a strong gross margin of 87.5%. Its revenue growth from the first six months of 2020 to the same period of 2021 was 69%, which is very impressive. This is likely coming from a successful transition of free users to paying customers -- which would suggest the strength of GitLab's products and their stickiness.

The downside of all of this growth is that the company is still nowhere near profitability. The company spent almost all of its gross profit on sales and marketing -- $83 million in the first six months of 2021. This resulted in total operating expenses of $150 million for the period -- representing 139% of revenue. Its net loss was $69 million for the period, and it burned $38.6 million in free cash flow.

Why I am hesitant

While the story of this business is very interesting and the financials for paying users is wonderful, there are two major reasons why I am staying away from GitLab for now.

First, the company is built on Git -- the same platform that GitHub is built on. GitHub is a direct competitor of GitLab, and it is owned by Microsoft (MSFT 0.07%). Because it is built on the same system, it would be incredibly easy for users to use GitLab's free version to learn the basics of Git, then begin using the competition's solution. At the free level, GitLab has almost no competitive advantage or stickiness.

Second, the competition in this space is large. On top of Microsoft, GitLab competes with Atlassian's (TEAM 2.63%) Jira, both of which also have all-in-one developer team solutions. While Gitlab mainly serves smaller developer teams, it is attempting to expand into the enterprise market, meaning Gitlab is attempting to directly compete with Atlassian. The problem is that Atlassian is much bigger -- and with these enterprises paying lots of money, the switching costs are much higher than they would be for free users. Atlassian had over 216,500 and revenue of over $610 million during the three months ending Sept. 30, 2021.

With intense competition on the paying level and no switching costs at the free level, I struggle to see how the company will be able to continue growing at the rates it currently is. The stock is currently trading at around 75 times sales, suggesting that its achievement of extreme growth in the future is already priced in.

While GitLab has immense promise, I would need to see multiple years where it continuously grows its paying customer base at rapid rates before I am confident enough in the company's competitive advantages to make an investment.

Alphabet Owns These 3 Software Stocks. Should You?

Down 68%, This Hypergrowth Software Stock Looks Ready for a Comeback

The Competitive Landscape for GitLab