The market appears to be underestimating how reliable these companies' revenue streams -- and earnings -- are.

If you feel like valuations on Wall Street have grown a little too frothy over the course of the past few months, you're not crazy. Up by more than 100% since its March 2020 low, the S&P 500 (^GSPC 0.81%) is now priced at more than 29 times its trailing 12-month profits, and more than 22 times its projected earnings. Those are rich valuations under any circumstances.

Not every stock is pushing its plausible price limits, however. There are some pockets of pricing sanity and even a few undervalued equities. The financial sector is one area where some quality companies are still relatively cheap. Here are three of that sector's best-bet stocks that are downright undervalued. 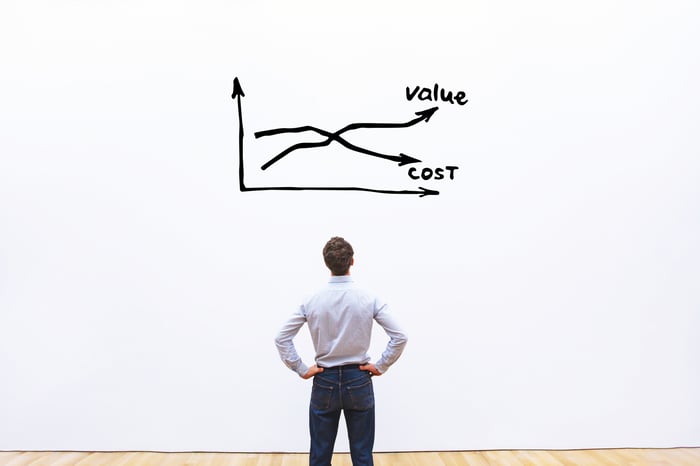 You may be more familiar with State Street (STT 1.08%) than you realize. While it provides a variety of services to investment managers, it's also the company behind the popular SPDR family of exchange-traded funds such as the SPDR S&P 500 ETF Trust and SPDR Gold Shares.

ETFs are great businesses to be in for one simple reason -- they're resilient in all environments. State Street collects a small piece of investors' total investments in its exchange-traded funds regardless of how those funds are performing, just as it collects recurring fees for offering services to other asset managers. That doesn't make the company completely immune to economic headwinds. It's worth noting, however, that its pandemic-crimped 2020 fee revenue of $9.5 billion was actually 3.8% higher than its 2019 fee revenue. Net income grew at an even better 8%. The company's seeing comparable growth through the first three quarters of this year as well, despite plenty of turbulence.

Investors seemingly recognize this consistent strength. The stock has outpaced the S&P 500 not only since last March's low, but year to date as well.

Even with the company's reliable fiscal growth, the stock's only priced at 11.4 times next year's projected earnings of $8.44 per share, while the forward-looking annual per-share dividend of $2.28 yields a little more than 2.3% at the current share price. And, clearly, State Street can more than afford to keep making its dividend payments.

Plenty of big banks out there have become household names. Western Alliance Bancorp. (WAL 3.49%) isn't one of them. With a modest market cap of $12.4 billion and a similarly modest $52 billion worth of assets on its books, it just doesn't turn a lot of heads.

Don't let its size deter you from considering it for your portfolio, though. This small bank is growing in a big way. It now has 45% more assets on its books than it did at the end of 2020, and twice as much as it had on the books at the end of 2019.

The booming real estate market had a great deal to do with that growth. Strong demand for mortgages allowed it to expand its loan portfolio to $34.8 billion as of the end of Q3, up by $8.8 billion year over year. Loan-loss provisions are shrinking too. Those new borrowers also appear to be opening checking accounts as well. Total deposits had increased by $16.4 billion from their September 2020 level to $45.3 billion in September 2021. Clearly, Western Alliance is doing something right.

As it is doing with State Street, the market is more or less rewarding Western Alliance Bancorporation's growth. Also like State Street, though, the magnitude of the reward somehow seems inadequate. The stock's still only trading at 12.1 times 2022's expected earnings, which should be 12% better than 2021's projected profit.

Finally, add Raymond James Financial (RJF 0.07%) to your list of undervalued stocks you can buy today.

You know this company. Aside from supporting 8,400 financial advisors, Raymond James maintains analytical research on more than 1,000 publicly traded companies. It may not be a powerhouse within the retail investing industry, but it's a player, to be sure.

It's also a business much like State Street's, and a little like Western Alliance's. That is, recurring fees are a prominent feature of its business model. That's a key reason fiscal 2020's top line was up by 11% rather than down, despite the impact of the pandemic. Its fiscal 2021 (which ended in September) saw revenue growth of 27%. Profits held up too, even with economic headwinds that proved costly at times. While this year's bottom line is expected to slide from 2021's $7.05 per share to $6.71 per share, that forecast may underestimate what actually lies ahead. Raymond James has topped earnings estimates in each of its past six quarters, and analysts are calling for revenue growth of more than 9% this year even as they expect earnings to contract. Regardless, the analyst crowd is looking for 10% revenue growth next year, which should drive the company to a record-breaking full-year profit of $7.86 per share.

The stock's currently priced at only 12.7 times estimated forward earnings, suggesting that investors are missing the reliability of the company's revenue stream.