Advertisers are just starting to wake up to the opportunity this company presents with its unique user base.

Shares of Pinterest (PINS 1.42%) have taken investors on a rollercoaster ride since the company went public in 2019. But the business has grown significantly over the last few years with monthly active users (MAUs) reaching 444 million in the third quarter, up significantly from roughly 250 million in the same period in 2018.

However, user growth has come to a halt in 2021 as the economy reopens. Total MAUs fell 10 million sequentially, and this has contributed to the stock's performance year-to-date with shares down 30%. But this could be a great buying opportunity.

Pinterest is making progress toward better monetizing its users. This was evident in the last four quarters with revenue growth accelerating through the first half of 2021. It was still strong in the latest report too, and there are untapped opportunities for the company.

Let's take a look at the key drivers that could deliver multi-bagger returns for investors. 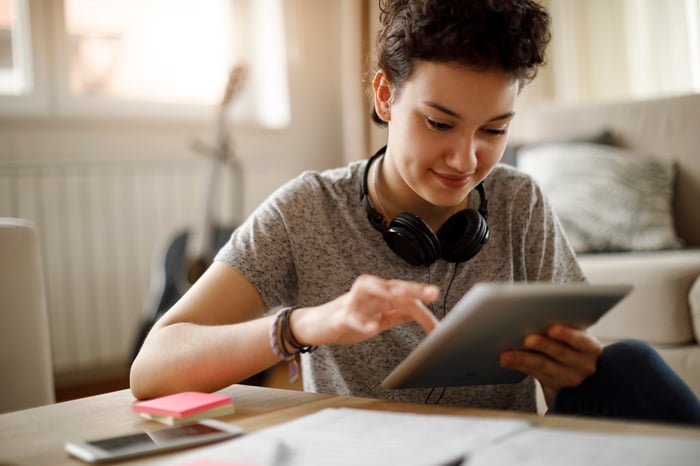 Pinterest is dedicated to helping its users find inspiration and share content, and now, the company is increasingly directing users to the brands and stores where they can make their ideas a reality. It's a unique platform in social media, and the engagement on the platform is getting the attention of advertisers.

Selling ads is how Pinterest makes its money, and this year, ad buyers are showing just how much they want a piece of Pinterest's large user base, who often come to the platform already looking for shopping ideas. Revenue grew 43% year over year in the third quarter, which management credited to increasing demand from large retail advertisers.

Most of the company's revenue is from the U.S., where the digital ad market is more developed than in international regions. This is also why average revenue per user (ARPU) in the U.S. is much higher than international ARPU.

However, international revenue is growing faster, up 96% compared to just 33% for Pinterest's home market.

The company is in the early stages of expanding its sales coverage, advertiser base, and shoppable content, which should allow international monetization to narrow the gap with the U.S.

It's the narrowing of the monetization gap between U.S. and international users that will drive significant long-term growth for Pinterest, potentially delivering a 10-times return for investors.

One last factor investors shouldn't overlook is valuation. Valuation matters when thinking about long-term return potential, and this is good news for Pinterest investors. The stock's price-to-sales ratio has fallen from around 30 at the start of 2021 to 13. That lower valuation gives investors a much better opportunity to earn greater returns than those who bought at the higher  levels from earlier this year.

Even so, the stock is not exactly a bargain, and anyone buying Pinterest should be confident in its ability to become a more shoppable platform. That what makes it ideal for advertisers, since users turn to Pinterest to discover and act on their ideas, instead of looking to be entertained like on other social media platforms. Management believes that as it introduces more shopping capabilities, including the recent rollout of short-form video content with Idea Pins, its offering will become even more appealing to advertisers, driving average revenue per user higher.

Pinterest is only beginning to flesh out its monetization efforts, and combined with a relatively low entry point as of this writing, the stock has the potential to return ten times your money over the long term.