Both social media companies could overcome their near-term challenges.

Pinterest's stock, which had been under pressure since its disappointing second-quarter report in late July, jumped to the low $60s in late October amid rumors of an acquisition by PayPal (PYPL 1.26%). However, the stock subsequently tumbled to the mid $40s after PayPal shot down those rumors.

Snap's stock, which had steadily risen after the company offered bullish long-term guidance at its investors day in February, plunged to a five-month low in late October after it posted a disappointing third-quarter report. 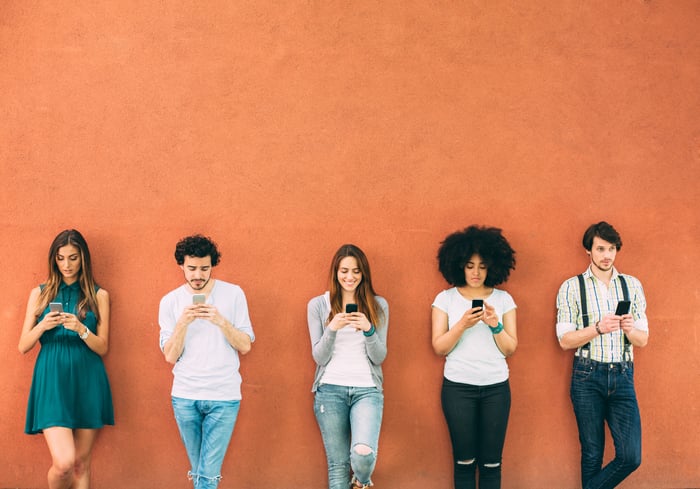 Over the past three months, shares of Pinterest and Snap have declined about 40% and 30%, respectively, as the S&P 500 has risen 4%. That volatility burned many investors who recently bought both stocks, but will both companies recover and generate much bigger gains over the long term?

Let's take a closer look at Pinterest and Snap's plans for the future and see which social media company might be more valuable by 2025.

Here's how rapidly both companies have been growing over the past two years, and what analysts are expecting for the next two years:

Based on those growth rates, it seems odd that Snap's price-to-sales ratio is twice as high as Pinterest's. However, investors are still willing to pay a premium for Snap because it isn't losing active users on a sequential basis -- as Pinterest did in the second quarter.

Pinterest's number of monthly active users (MAUs) rose from 265 million at the end of 2018 to 454 million in the second quarter of 2021. But that marked a sequential decline from 478 million MAUs in the first quarter.

The bulls believe that slowdown, which Pinterest attributed to reopening trends, will be temporary. But the bears believe its growth peaked during the pandemic, and that its MAU growth will stall out as those tailwinds fade.

That uncertainty, along with Pinterest's reluctance to provide multi-year growth targets, has made it difficult to assess the company's future.

Pinterest's international business has been gaining MAUs at a much faster rate than its domestic business. If Pinterest grows its overseas MAUs at twice the rate of its domestic MAUs over the next four years, it could increase its international MAUs from 363 million in the second quarter of 2021 to 510 million in 2025 -- and give the platform nearly 620 million MAUs.

Snap, which ended the third quarter with 306 million daily active users (DAUs), expects to grow its annual revenue by about 50% over the next few years. It expects the expansion of its self-service ads, a rising mix of higher-value video ads, new augmented reality games and filters, and the expansion of a "social shopping" platform to drive that growth.

However, Snap also seemingly underestimated the impact of Apple's (AAPL 1.37%) iOS update, which allowed users to opt out of data tracking features and targeted ads. That change caused it to miss analysts' revenue estimates last quarter, and could throttle its near-term growth.

Which company will be worth more by 2025?

Pinterest and Snap will both face significant challenges over the next four years. But if Pinterest stabilizes its MAU growth and continues to expand its social shopping ecosystem, its revenue should continue to rise.

If Snap stays ahead of Meta's Instagram and ByteDance's TikTok in the teen market, expands its AR and social shopping platforms, and adapts to Apple's platform changes, it could also keep growing.

So even if Pinterest and Snap were trading at the same price-to-sales ratios in 2025, Snap would likely still have a much higher market cap.

Pinterest probably won't be worth more than Snap by 2025, but that doesn't make it an inferior investment. Both of these social media companies have clear strengths and weaknesses, and investors should focus on those issues instead of fretting over which company has the higher market cap.