Pfizer (PFE -1.04%) stepped ahead of Moderna (MRNA -2.01%) nearly a year ago when it won the first authorization for a coronavirus vaccine. Of course, Moderna's vaccine entered the market a couple of weeks later. And together, the two companies vaccinated most Americans.

It's fair to call them both market leaders. That said, Pfizer has steadily vaccinated more individuals that Moderna. And two numbers from Pfizer show this isn't about to change. In fact, the gap is widening. The big pharmaceutical company says its U.S. market share has grown to 74% from 56% back in April. And its European market share has climbed to 80% from 70%. This refers to vaccines administered. Now the question is: Do these two numbers mean trouble ahead for Moderna? 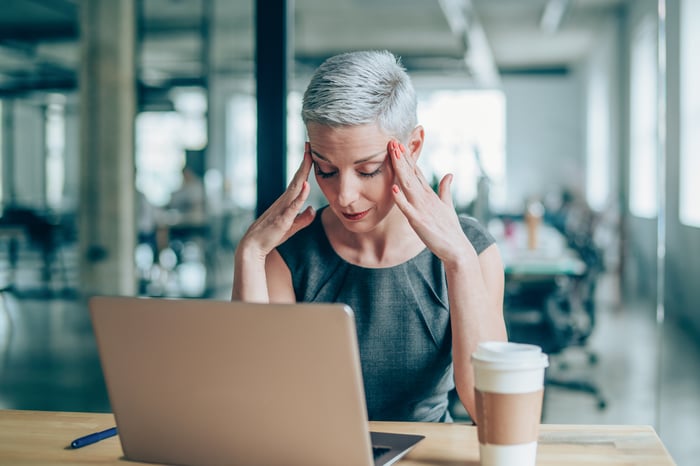 Let's talk about a few more numbers before we answer this question. First, it's important to note that both companies expect to generate billions of dollars in coronavirus vaccine revenue this year. And both companies have signed major vaccine deals with the U.S., the European Union, and many other countries. Pfizer and its partner BioNTech predict their vaccine will bring in $36 billion in revenue this year. Moderna forecasts revenue between $15 billion and $18 billion.

Pfizer has fully vaccinated 107 million Americans. Moderna has vaccinated about 70 million. The U.S. Food and Drug Administration (FDA) recently authorized the companies' boosters for use in some individuals. So that should increase the number of doses administered in the weeks and months to come.

All of this means Pfizer can gain even more share as it vaccinates these groups in the weeks to come.

Should Moderna investors be worried about this trend? Comments from Pfizer offer us a clue. Pfizer said its gains are mainly due to two elements: It won emergency authorization of its booster earlier than Moderna. And some countries outside of the U.S. have favored Pfizer's vaccine for younger people.

So, this hasn't been a specific rejection of the Moderna vaccine. The first element was linked to the timing of an authorization. And here's why the second element doesn't represent a major threat: The coronavirus has been most dangerous for older individuals. Post pandemic, that population may be most likely to seek out an annual booster. It may become the core target market. So even if Pfizer leads in youth vaccination, that doesn't necessarily spell trouble for Moderna's long-term prospects. And the strength of Moderna's data may actually make its vaccine more popular with at-risk populations. A recent real-world study showed the Moderna vaccine was the most effective at preventing hospitalization.

Moving forward, it will be more important to monitor three specific elements: future vaccine orders, whether Moderna is able to smoothly deliver orders, and whether people are going out to get the Moderna booster. It may not matter whether Moderna's market share is less than that of Pfizer. What does matter is Moderna's ability to generate significant revenue. That is happening now. And according to advance purchase agreements, that's set to happen next year too. Moderna still holds and is likely to hold enough of the market to generate billions of dollars in revenue.

So, Pfizer's market share doesn't necessarily mean trouble for Moderna. Of course, being No. 1 is great. But in a market as big as the coronavirus vaccine one, coming in second can be nearly as rewarding -- for the company and for shareholders.