It's a pretty safe bet that the world economy will continue to use more and more technology, especially coming out of the pandemic. During COVID, large swaths of the globe were forced to adopt digital solutions to replace in-person transactions, accelerating trends in cloud computing, 5G communications, automated factories and cars, and the use of data-driven artificial intelligence (AI) and machine learning (ML).

Riding several of these exciting tech waves, the following competitively advantaged Nasdaq Composite stocks would make excellent cornerstones of tech portfolios through the 2020s and beyond. 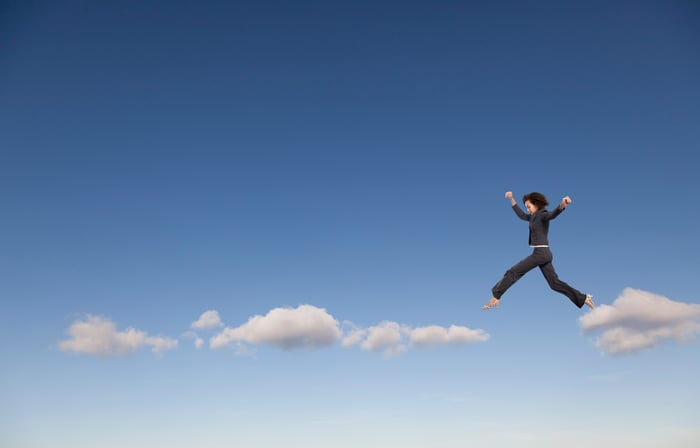 Amazon's AWS cloud is one of the best businesses in the world: Its other stuff is pretty good, too

Although cloud computing was already picking up steam before the pandemic, companies slow on the uptake realized digital transformation is a must, and they're converting to the cloud with increased urgency today.

As evidence, look no further than Amazon's (AMZN 2.83%) third-quarter earnings report, where Amazon Web Services (AWS) accelerated 39%, up from 37% in the prior quarter and 29% in the year-ago third quarter. AWS operating margins also surged two full percentage points over the prior quarter to 30.3%. AWS is the leading cloud computing platform with a 10-year head start, so it should have limited competition because of the massive data center and technical investments required.

Meanwhile, Amazon is using AWS profits to fund heavy investments in e-commerce, delivery capabilities, and other innovations. Those investments are weighing on total profits today but only serve to further cement Amazon's dominance in e-commerce. Look for one-day shipping, third-party deliveries using Amazon's owned delivery fleet, checkout-less technology, and many other innovations to bear fruit in the 2020s and beyond... along with others we don't even know of yet.

While founder Jeff Bezos stepped back from CEO to executive chairman this year, Amazon's "Day One" culture should continue to innovate and capture new opportunities across existing and emerging tech platforms. With the stock flatlining for the past year as investors focused more on reopening stocks, now may be a great time to buy into this long-term market-beater. 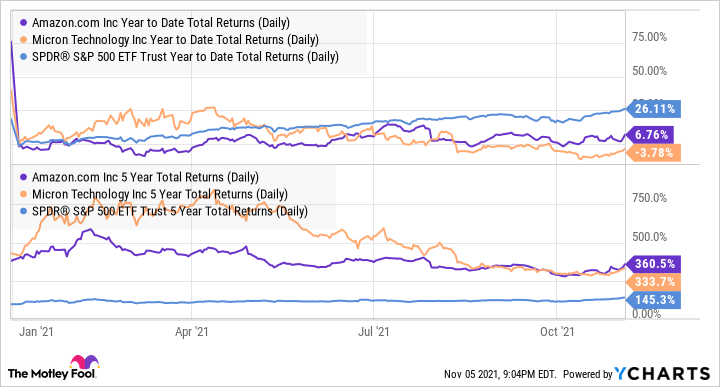 As Amazon is only one of three major cloud infrastructure platforms outside China, Micron Technology (MU 0.95%) is one of only three major DRAM memory producers in the whole world, with the other two in South Korea. Micron also makes NAND flash -- one of six or so companies making that growing storage medium.

If Amazon is the growth engine of a 2020s tech portfolio, Micron would be the value stock of the bunch. While Amazon trades at around 47 times next year's earnings estimates, Micron goes for only about 7.5 times next year's EPS figure.

Why the discount? Well, Micron's business has traditionally been very cyclical. In general, prices for memory and storage chips can go up and down based on supply and demand, leading to booms and busts.

However, Micron's business results are becoming more stable as time goes on. In the last downturn during 2018 and 2019, Micron still made a profit -- the first time in modern history it's done so in a memory market swoon. In addition, demand for DRAM memory and NAND storage is only growing and diversifying, from PCs to mobile phones, to cloud data centers, to connected cars and factories. Demand for data in AI and ML applications should be massive, fueling exponential memory demand growth in the modern age.

Meanwhile, the most advanced nodes for memory chips are becoming more difficult and capital-intensive to produce with each generation. That means supply isn't likely to explode, and the remaining players won't engage in market-share wars.

Micron just backed up this notion of greater stability by implementing a dividend for the first time in 25 years back in September. While the dividend is relatively small, around a 0.5% yield at today's stock price, Micron is also repurchasing far more stock than it's paying out in dividends. Buying stock at today's bargain prices should pay off handsomely for shareholders in the years ahead.

Shareholders shouldn't expect a smooth ride; Micron's stock can be volatile, and the company will still be somewhat cyclical. Yet over the long-term, investors should expect higher highs and higher lows, Meanwhile, Micron can take advantage of downturns with opportunistic repurchases. And if the market realizes the industry is becoming more stable, a rerating to a higher multiple could very well happen at some point this decade.

Between Amazon's growth platform and Micron's leading-edge hardware chops and value, these two stocks provide fine and diverse cornerstones for any tech portfolio.