Temperatures are falling, but investor interest remains hot for this EV-charging stock.

After plunging 12% in September, shares of Blink Charging (BLNK 2.33%), a company dedicated to developing EV-charging infrastructure, rebounded strongly in October and climbed 11.2%, according to data from S&P Global Market Intelligence.

While the company's announcements regarding two deals electrified some investors' optimism last month, the stock's recent gains can be attributed to the passage of the infrastructure bill. 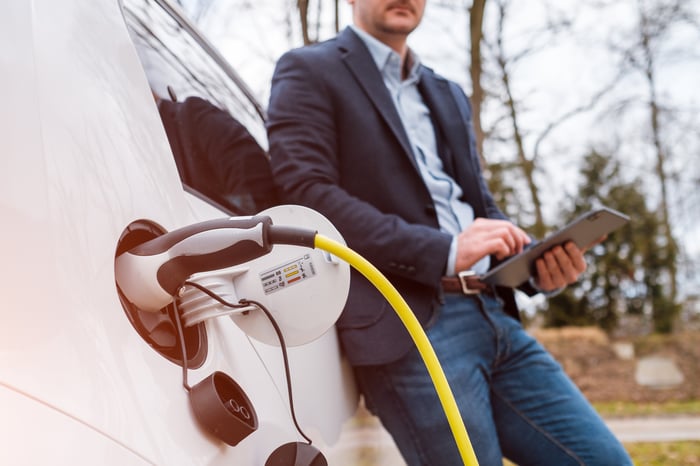 Beginning the month on an auspicious note, Blink Charging announced on Oct. 5 that it would be expanding its electric vehicle (EV)-charging infrastructure in the city of Los Angeles. In an effort to develop the BlueLA EV-sharing program, Blink Charging will deploy 300 charging stations at approximately 60 locations throughout the city with the help of funding provided by the Los Angeles Department of Transportation. Two days later, the company had more news illustrating the demand for its EV-charging solution.

On Oct. 7, Blink Charging announced the sale of 64 Level 2 residential charging stations to Rudy's Performance Parts, an automotive parts retailer, which has slated the charging stations for resale. Blink Charging's management intimated that more deals of this sort may be on the horizon. In the press release announcing the deal, Michael Battaglia, Blink Charging's senior vice president of sales, said the company was "enthused to see early sales of the charger from Rudy's Performance Parts and anticipate[s] an increased interest, as driver demand grows for fast home charging solutions."

Financial terms of the deals with the city of Los Angeles and Rudy's Performance Parts were not disclosed.

Enthusiasm for Blink Charging remains strong today thanks to the infrastructure bill finding itself on its way to President Joe Biden's desk. Included in the $1 trillion legislation is $7.5 billion in spending for the development of EV-charging infrastructure. In addition, the bill provides $5 billion in funding for the purchase of electric school buses, which investors are recognizing as further proof that the burgeoning of the EV-industry is well underway.

Recognizing the sizable investment opportunity the growth of the EV industry presents, investors are gobbling up EV makers as well as charging infrastructure stocks like Blink Charging. While the company's success in inking deals last month is laudable, there's no guarantee that the deals will amount to material gains in the company's finances. Similarly, just because the infrastructure bill is headed out of the legislature doesn't mean Blink Charging is guaranteed to be a winner. Competition among EV-charging businesses is high, and potential investors should do their due diligence before parking one of these EV stocks in their portfolios.