Inflationary pressures are plaguing the global economy. One restaurant chain is trying to take advantage of it.

The unexpected surge in consumer demand following the depths of the pandemic has led to supply chain bottlenecks, commodity constraints, and production delays. As a direct result, inflation is one of the hottest topics on investors' minds today.

Many companies, including restaurant giant Starbucks (SBUX -0.58%), are also dealing with labor shortages, a significant problem given how important workers are. The large-cap business is responding to the issue by raising wages in the hopes of retaining and attracting an adequate workforce. Here's why this could benefit shareholders as well. 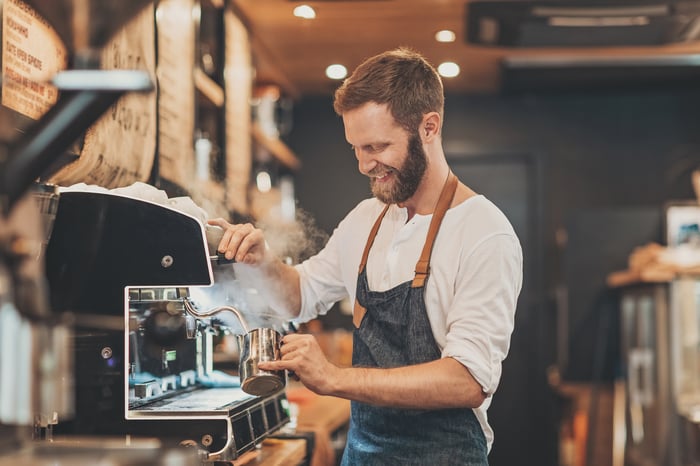 Starbucks has always prided itself on being an attractive place to work in the restaurant sector. All U.S. full-time and part-time employees -- what the business calls "partners" -- are offered a bevy of benefits not often seen among restaurant workers, including health insurance, tuition assistance, a 401(k) plan with company match, and paid time off. Workers are even offered a premium subscription to Spotify.

On the Q4 earnings call, management revealed plans to raise the average hourly pay rate in the U.S. to $17 by the summer of 2022. Not only is this up from the current average of $14 an hour, but it's also higher than the previous target of $15. Starting in January, store employees with two or more years of service will receive up to a 5% raise, while those with five or more years of service will get up to a 10% hike. "In total, the FY 2021 and FY 2022 investments represent approximately $1 billion in incremental annual wages and benefits," CEO Kevin Johnson said on the conference call with analysts.

Anyone who is a Starbucks customer knows just how critical these partners are to the ongoing success of the business, which is especially true in this case because of the constant interaction with customers and the massive number of transactions. Investing in employees also means strengthening Starbucks' competitive position. It's the right strategic move by the leadership team.

Higher shareholder value is not just about lowering worker costs

Simple financial-statement analysis tells us that as a company's operating costs, such as employee wages, fall, net income should rise (all else equal). A business that produces more profit, and ultimately free cash flow, is valued higher by investors. But even with greater labor expenses, Starbucks' management said it believes that shareholders will be better off over the long term.

When asked by a Wall Street analyst about the decision to pay partners more, Johnson replied: "This is all about leaning into the growth, taking market share that's going to be permanent, and the benefit of that market share is going to create significantly more shareholder value than we would have created without the investment." According to the CEO, the business will be meaningfully better as a result of higher wages.

At the end of the day, it's all about operating leverage for Starbucks. This is a situation where net income rises at a faster clip than revenue thanks to a company's ability to spread out incremental sales over its fixed costs. Starbucks wants to attract more partners in order to take advantage of the expected growth in consumer mobility as the pandemic slowly fades. Meeting this demand is absolutely crucial.

The confidence in this decision is also why management announced the intention of returning $20 billion total back to shareholders in the form of dividends and buybacks over the next three fiscal years. This capital-allocation policy equates to 14.5% of Starbucks' current market capitalization of $138 billion.

Take care of employees, and investors will eventually be rewarded. Sometimes it really is that simple.