Management lowered expectations for the rest of the year after consumer interest fell.

Peloton Interactive (PTON 26.53%) reported fiscal 2022 first-quarter earnings after the market closed on Nov. 4. The results disappointed investors, and the stock price crashed by over 36% on the day after the announcement.

That was quite a negative investor reaction considering how well the stock has performed over the past two years. Some would even argue it might be an overreaction.

Let's take a closer look at some of the report's information to determine if the selling is justified or if the market sold off too soon. 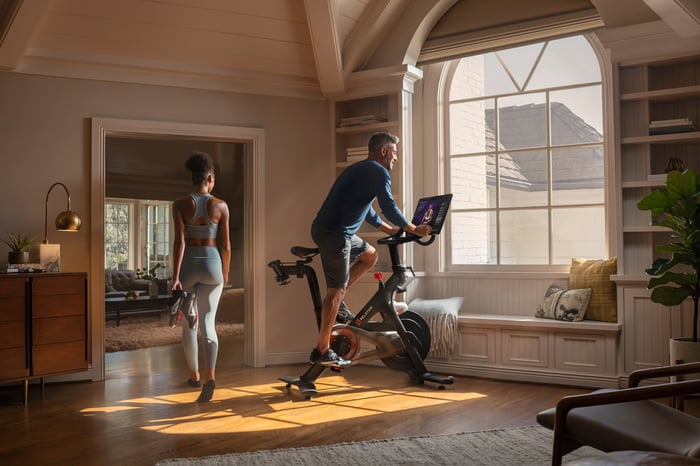 A few long months ago, Peloton management gave investors guidance on what to expect from the company in the fiscal year 2022. In that forecast, it estimated the company would end the year with 3.63 million connected fitness subscribers, $5.4 billion in revenue, and a negative $325 million in adjusted earnings before interest, taxes, depreciation, and amortization (EBITDA).

During the first quarter (which began July 1), reopening economies worldwide led to less interest in Peloton products. At the end of its first quarter of fiscal 2022, management thought it prudent to revise the outlook downward for the rest of the year. It now expects connected fitness subscribers of 3.4 million, revenue of $4.6 billion, and a negative adjusted EBITDA of $450 million, all at the midpoints, for the fiscal year 2022.

All three downgrades are significant, no doubt. But of the three, the most significant is the lower-than-expected connected fitness subscriptions. Notably, each subscriber pays a monthly fee of $39 for access to Peloton's live and recorded exercise classes. The company boasts a very high retention rate for those subscribers: 92% as of the end of the first quarter.

Peloton's lowered guidance assumes 233,000 fewer subscribers by the end of the year. At $39 per month, that would be $9.1 million less revenue per month or $109 million annualized. And because the company retains such a large group of members each year, that's lower-than-expected revenue for several years.

Moreover, subscription revenue comes with a substantially higher gross profit margin compared with its exercise equipment sales. While these figures fluctuate quarter to quarter, for the first quarter, subscription gross profit margin was 66.7%, while for products, it was 12%. The loss of more than $100 million in recurring, highly profitable revenue would be a significant blow to Peloton.

Did Peloton's stock get oversold?

It's no surprise that the stock sold off after the company announced first-quarter earnings and management lowered guidance for the year. Still, was a 36% drop justified?

The thought driving part of the selling is that Peloton may already be in most people's households who want its product. That would be a reasonable conclusion. If you were thinking of buying one of its bikes, you probably purchased one during the pandemic.

The other side of the argument is that Peloton offers a convenient way to stay in shape in the comfort of your own home. The company lowered the price of its original bike by $400 at the end of August, but it still costs almost $1,500. Indeed, some people would like to buy the bike but are priced out. So there is a path for the company to reach more households as it lowers its cost of production and then lowers the price at which it can sell its machines.

That's a more challenging path for growth than Peloton was following just recently. Even before the pandemic onset, the company was increasing sales by 100% per year. Management's guidance of $4.6 billion, if met, would be sales growth of 15%.

In the end, the lowered outlook was abysmal news from management, but a sell-off of 36% is probably overdoing it.