Selling cheaper and simpler products has been a financial boon for Crocs, and its share price shows it.

Since the start of 2021, both Nike (NKE -1.93%) and the S&P 500 have gained roughly 25%. While returns like this would otherwise be cheered by investors, a lesser-known, under-the-radar footwear stock has produced a year-to-date return of 188%. Shareholders can thank soaring revenue and profit for Crocs' (CROX -3.27%) remarkable price appreciation. Not only have its shares significantly outperformed the global athletic apparel juggernaut, but Crocs also leads in one very important financial metric. Let's take a look at what that is. 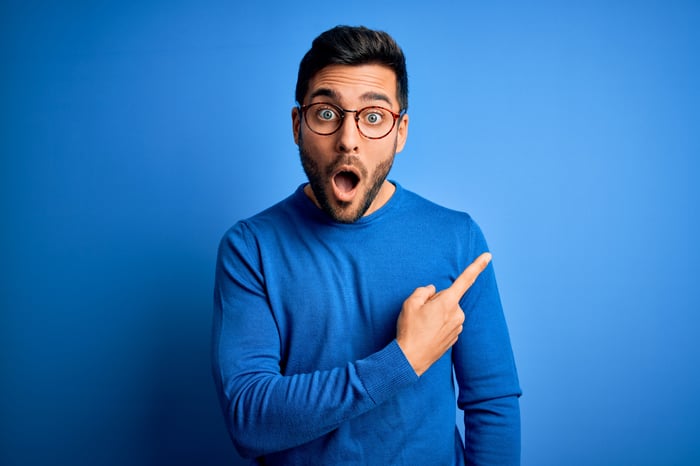 Keeping more of every sale

In the most recent quarter, Crocs' gross margin was an impressive 63.9% compared to Nike's 46.5%. And this isn't just a one-time phenomenon. Except for two separate quarters, Crocs has carried a better gross margin over the past decade. Why is this important? Read on.

Since the gross margin is the difference between what it costs to manufacture a product and the price a customer pays, obviously the greater the spread, the better. It's also a clear sign of pricing power, which is one of Warren Buffett's favorite investment characteristics. Furthermore, a customer's desire to pay a premium price directly correlates to how different and better a specific product is in comparison to what rivals offer.

That said, what makes Crocs' higher gross margin even more extraordinary is that its shoes are sold at much lower prices than Nike's. "The average selling price during Q3 was $24.42," Crocs' CFO Anne Mehlman highlighted on the Q3 earnings call with analysts. By contrast, Nike's footwear -- thanks in part to expensive Jordan shoes -- sells at much higher prices.

Crocs' shoes have a plain and simple design -- and they're easy to assemble, helping to keep costs low. They really don't require much innovation and forward thinking. Contrast this with the Oregon-headquartered sports giant, Nike, where thinking outside the box and pushing the needle in regard to design, fit, and style are second nature.

Crocs just had one of its best quarters ever, but the word "innovate" (or a variation of it) was only mentioned three times on its recent earnings call. In comparison, Nike's management team spoke that key word on 28 separate occasions throughout its latest call.

Its simple-to-make shoes are also a major reason why Crocs has been able to deal with supply-chain challenges. Starting up production at factories that aren't shut down because of the pandemic is apparently a quick process because the company's Classic Clog shoe only has three components. "We will continue to diversify our manufacturing base. I think Indonesia is our most immediate target," CEO Andrew Rees pointed out.

The same production issues facing Nike forced the leadership team there to slash fiscal 2022 revenue guidance to mid-single-digit growth from the previous estimate of a low-double-digit increase.

Don't be mistaken. Nike has an incredibly powerful brand and a long track record of outstanding success in the apparel market. Plus, its big push over recent years to integrate technology into its business to enhance the consumer experience is admirable. It's also something from which other companies in the industry can learn, including Crocs.

But Crocs is making its name known in the competitive footwear market. Investors should take notice.

These 3 Stocks Have More Than Doubled Over 5 Years. Can They Do It Again?