The online insurer continues to expand while taking big risks.

Lemonade's (LMND 5.19%) stock dipped 5% in after-hours trading Monday after the online insurer posted its third-quarter earnings and announced its plans to buy Metromile (MILE), a digitally native provider of pay-per-mile auto insurance, for $500 million in stock.

The headline numbers look decent, but the planned purchase of Metromile -- which would allow it to accelerate the rollout of its new auto insurance service -- seemed to worry investors. Metromile is still deeply unprofitable, and the all-stock deal will dilute the value of Lemonade's existing shares, which are already pricey, trading at a valuation of more than 20 times next year's expected sales. 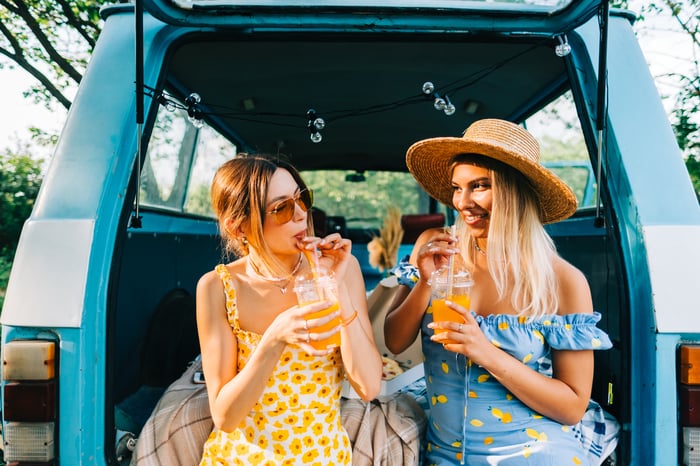 Should investors consider Lemonade's post-earnings pullback to be a good buying opportunity? Or is this volatile stock still too speculative to own?

Lemonade's year-over-year revenue growth over the past 12 months was distorted by its launch of proportional reinsurance agreements in 2020's third quarter. With these agreements, Lemonade cedes 75% of its premiums to reinsurers in exchange for a 25% commission for every ceded dollar.

This business model generates less revenue for Lemonade, but it boosts the company's gross margins and reduces its capital requirements. That change temporarily throttled Lemonade's year-over-year growth in reported revenues, so investors should focus on four other metrics instead: its growth in customers; premium per customer; in force premium; and gross earned premium:

Lemonade ended the third quarter with 1.36 million customers, compared to about 941,000 customers a year prior.

That expansion indicates that Lemonade's core strategy -- to simplify the byzantine process of buying insurance with its AI-powered app -- continues to attract younger and first-time insurance buyers. It also suggests its newer life insurance and pet insurance services are attracting new customers and gradually diversifying the business away from renters and homeowners insurance.

Lemonade's annual dollar retention (ADR) rate rose six percentage points year over year to 82%, thanks to an "increasing prevalence of multiple policies per customer." It didn't disclose exactly how much of its premiums came from its newer services, but that rising ADR indicates that Lemonade Car -- which should generate much higher premiums per customer than any of its other insurance plans -- could be well received as it rolls out in additional states.

For the full year, Lemonade expects its in-force premium to grow by 78% to 80%, its gross earned premium to rise by 83% to 84%, and its revenue to increase by 33% to 35%. Among analysts, the consensus expectation is for 32% revenue growth.

Bottom-line blues and a big acquisition

Its net losses also widened sequentially and year over year, both by generally accepted accounted principles (GAAP) and on an adjusted earnings before interest, taxes, depreciation, and amortization (EBITDA) basis:

Those widening losses, along with the fact that Lemonade's weighted average share count skyrocketed by 136% year over year in the first nine months of 2021 (mainly due to a big secondary stock offering earlier this year), explain why investors were rattled by word of its planned takeover of Metromile.

In 2020, Metromile's revenue declined by 34% to $35.1 million as the pandemic disrupted travel and auto sales. Its net loss widened from $57.2 million to $120.1 million -- which nearly matched Lemonade's loss last year.

In the first half of 2021, Metromile's revenue surged 177% year over year to $45.4 million as the pandemic-related headwinds waned. But its net loss widened again, from $25.8 million to $144.9 million. Lemonade might stabilize those losses as it integrates Metromile's business and eliminates redundancies, but the combined company should remain deep in the red.

Nonetheless, Lemonade might consider the $500 million price tag -- which values Metromile at less than six times next year's sales -- to be a much cheaper alternative to expanding Lemonade Car on its own. Metromile's in-car sensors should also complement Lemonade's plans for using telematics to provide lower prices to safe and low-mileage drivers.

If you believe Lemonade can disrupt the traditional insurance industry and gain tens of millions of new customers, this could be a good time to open a small position in the stock. However, I wouldn't recommend making Lemonade a core portfolio holding yet, since it's still too speculative and will face even steeper losses after it buys Metromile.