The company plunges sharply into the red on the bottom line in its Q3, and misses analyst estimates.

Healthcare tech stock Schrödinger (SDGR 9.66%) was looking a bit sickly Thursday. After the company reported third-quarter earnings that missed on both the top and bottom lines, investors sold out of the shares, leaving the stock with a nearly 12% decline on the day.

For the quarter, Schrödinger booked revenue of $29.9 million. While that was up by 16% on a year-over-year basis, it didn't meet the average analyst estimate of just under $31.6 million. 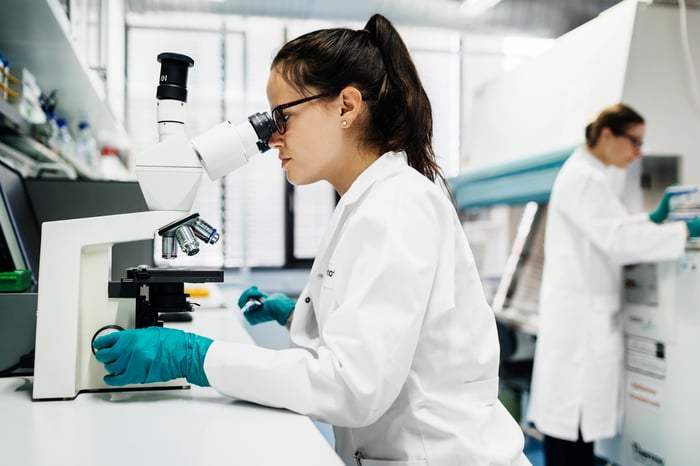 Meanwhile, Schrödinger flipped into the red on the bottom line, and dramatically so. The quarter's net loss was a shade over $35 million ($0.49 per share), against the Q3 2020 net profit of almost $3.9 million. Analysts counted on the company landing in the red, but not quite this deeply -- their average per-share net loss estimate was $0.43.

The company, which specializes in harnessing artificial intelligence (AI) solutions to help biotechs and pharmaceutical companies in the drug discovery process, wasn't deterred by the bottom-line ugliness or the double whiff. It clearly believes the future still holds much promise.

Schrödinger quoted CEO Ramy Farid as saying that, "The level of engagement with senior [research and development] leaders across [the pharmaceutical sector] and the growth we are seeing in new software customers suggests a shift in the drug discovery paradigm and a push to incorporate advanced computational approaches into projects at all stages."

So Schrödinger is still gazing into the crystal ball and seeing business growth. It proffered guidance for full-year 2021 of $124 million to $134 million in total revenue, which represents solid if unspectacular improvement over 2020's $108 million. However, it believes that the growth in operating expenses will outpace the 42% of 2020, a troubling development for short-term profitability.

Is There Any Hope Left for Schrodinger Stock?
395%