Green Thumb Industries (OTC:GTBIF) stock rose more than 13% in early trading on Thursday with it climbing nearly $3 a share over the previous day's close. The Chicago-based cannabis company closed at $21.80 on Wednesday. On Thursday, it opened at $22.72 and rose to $24.95 in the early afternoon. The stock is still closer to its 52-week low of $18 per share than its 52-week high, $39.11.

The move was a reaction to the company's third-quarter report, which was released after the markets closed on Wednesday. Green Thumb reported that it more than doubled its net income and earnings per share, year over year, with $20.2 million and $0.08 earnings per share (EPS), compared with $9.64 million and $0.04 EPS in the same period in 2020. The company's quarterly revenue was also a big improvement at $233.7 million, up 5.3% sequentially and 48.7% year over year. Adjusted operating earnings before interest, taxes, depreciation, and amortization (EBITDA) was $81.2 million, up 52.6% year over year. 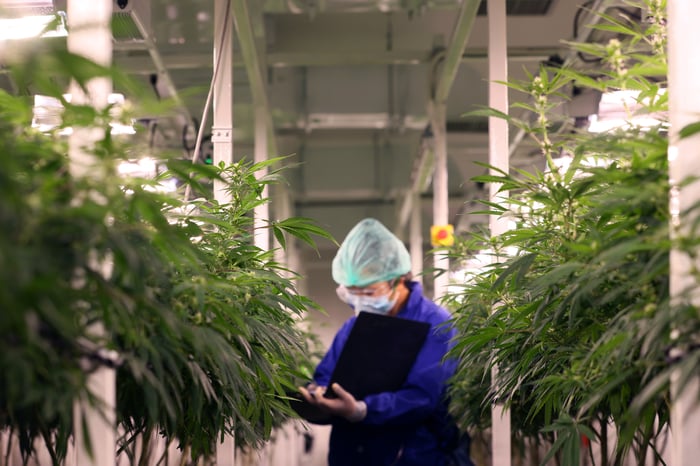 Green Thumb is one of the largest multi-state operators (MSO). So far, this quarter, only Curaleaf has posted higher revenue numbers, at $317 million. While the stock, like many cannabis stocks, is down over the past three months, the company is showing economic momentum. It has, it said in the third-quarter report, posted seven consecutive quarters of positive cash flow from operations.

The company is clearly focused on growing. It has 65 stores across 14 markets, and in the last quarter, added stores in Virginia, Rhode Island, Pennsylvania, Massachusetts, New Jersey, and Illinois. To grow, however, the company has increased its debt. In September, it had $206.5 million in debt, and on Oct. 15, just before the end of the quarter, it raised an additional $33.2 million in debt. That's not a big deal as long as the company's EBITDA keeps growing, but it's something investors should keep an eye on.

As cannabis markets mature, the largest MSOs such as Green Thumb may have an advantage due to higher margins and brand recognition. The race is on for the company to continue to position itself, particularly in expanding markets in the Northeast that have limited licenses.

Green Thumb CEO Ben Kovler, in the company's third-quarter report, said the U.S. cannabis industry is worth $24 billion in annual sales now and he expects that number to triple in size over the next decade as new states and consumers enter the market.