The stock is falling because of near-term headwinds, providing a great buying opportunity.

Don't let Roku's (ROKU -3.64%) post-earnings sell-off fool you. The streaming-service aggregator delivered strong results for the third quarter. Revenue increased by 51% year over year, and adjusted earnings per share (EPS) of $0.48 completely blew away the consensus estimate of $0.09.

So why is the stock price down? Roku's active accounts came in just shy of Wall Street's estimates: 56.4 million, compared to estimates for 56.7 million. That tiny miss might seem like a silly reason to sell, but more concerning was management's outlook for the fourth quarter, which was softer than market participants wanted to see. 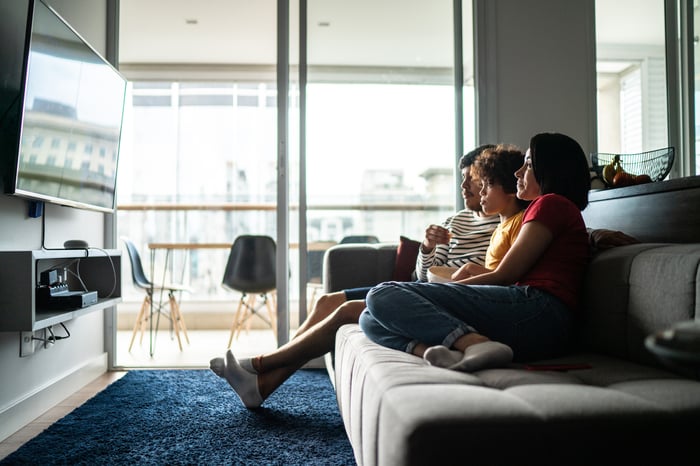 Still, if you're a long-term Roku shareholder, the most important number you should care about is average revenue per user (ARPU), which accelerated for the fourth consecutive quarter to a year-over-year growth rate of 49%. ARPU crossed the $40 level for the first time, up from $27 a year ago, as growth in advertising is helping Roku better monetize its users.

Factors that could lower growth in the near term

Roku guided for a deceleration in revenue growth in the fourth quarter of 37%, down from 51% in the third quarter. Roku reports revenue across two operating segments: player revenue and platform revenue. Player revenue includes sales of streaming devices, such as a Roku Streaming Stick and Roku Express, and makes up less than 20% of total revenue.

The platform segment generates a higher gross margin than sales of streaming devices, since revenue is derived from digital advertising sales and other services, such as subscriptions, billing services, and revenue-sharing agreements with content distributors.

Player segment revenue was down last quarter because of component shortages resulting from widespread supply chain problems. These problems also are causing a spike in prices for TVs that come with Roku's TV operating system pre-installed, which could pressure demand during the holidays. Roku TVs are an important gateway to the platform for new users, but management anticipates these problems persisting into 2022.

On top of that, Roku player devices saw an average price decrease of 7% year over year against higher component costs, as management prioritized keeping prices low to drive higher demand to grow active accounts, rather than optimizing profit margin in the player segment. Lower average selling prices, along with ongoing investments to support the growth of the business, are expected to pressure profitability in the fourth quarter.

Some of the broader headwinds in the economy in the near term also have certain industries rethinking their advertising budgets, which management anticipates might pressure sales of digital ads on the Roku platform in the fourth quarter.

These near-term headwinds explain the sell-off in the share price. The stock is down about 30% over the last three months, but that also means investors can buy shares at a much better value ahead of the longer-term shift by advertisers from traditional TV to streaming. Roku entered the year trading at a high price-to-sales (P/S) ratio of over 30 but now trades at a more attractive 15 multiple. 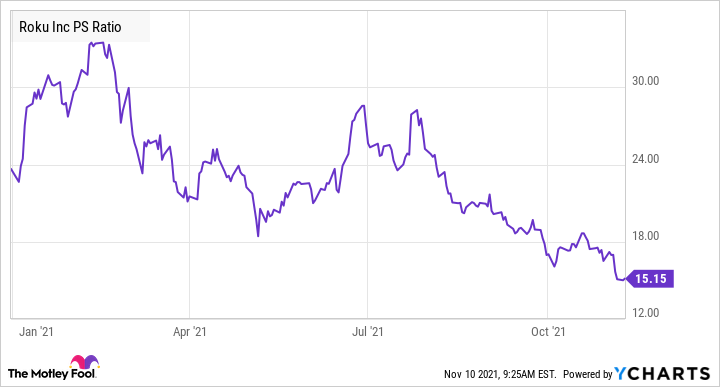 Roku's existing users remain highly engaged, with total streaming hours during the quarter growing 21% to 18 billion. This is very attractive to advertisers. The acceleration in average revenue per user (ARPU) in recent quarters stems from advertisers shifting more spending to streaming platforms during the pandemic, and Roku's growing base of 56 million active accounts gives advertisers an opportunity to connect with an audience that is no longer reachable through traditional media.

Viewers between the ages of 18 to 49 are spending 42% of their TV time streaming, but only 22% of advertising spend has moved from traditional TV to streaming. This is a large gap, and Roku's ARPU metric shows this gap narrowing, but it has a long way to go before it fully closes.

The digital ad market is a $60 billion opportunity, which is enormous compared to Roku's platform revenue of $2 billion over the last year. This is why investors should ignore the short-term speed bumps and use the market volatility as a friend to buy more shares at a cheaper value point. The digital ad shift should make Roku a more valuable business in 10 years than it is today.