GoPro is solidly profitable again, but finding growth opportunities might be tough.

After years trying to figure out how to build and price cameras people want and manage inventory without being undersupplied or oversupplied during the holidays, GoPro (GPRO 2.67%) seems to have figured out how to run its core business. Instead of introducing three or four new cameras each year, the company introduces one new camera and moves last year's camera down the product list, reducing price but keeping it in the lineup.

The good, better, best product strategy helps reduce inventory risk for any particular camera and simplifies both design and manufacturing. Based on recent financial results, the strategy is working, but what's next for GoPro? 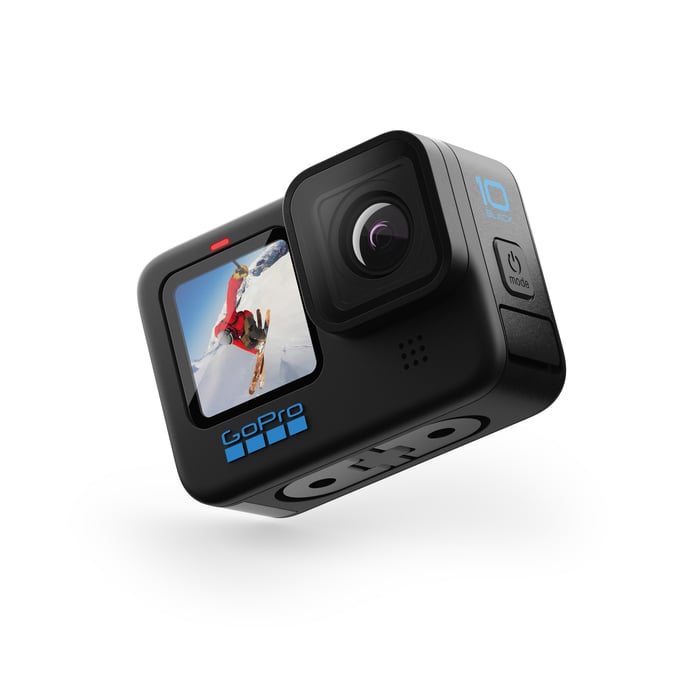 Looking at GoPro's financials takes a lot of context. The company is growing short term, but revenue is actually down significantly from 2015 when the company was at its peak. What you see below is that gross margins are up and net income is up sharply and that's largely because GoPro has reduced its own unforced errors. 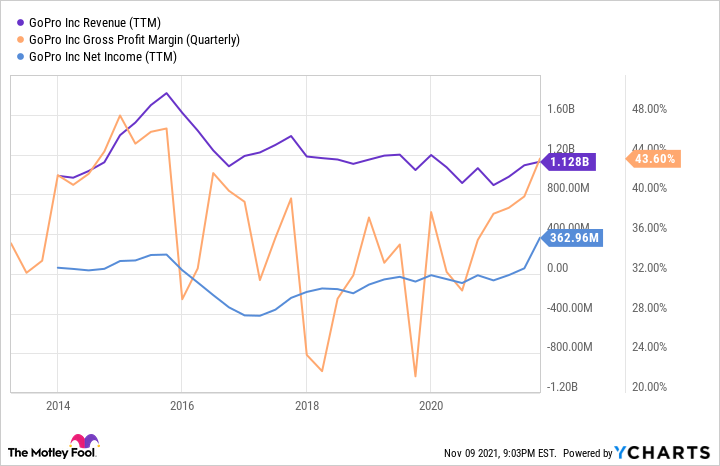 Starting in 2016, GoPro went through a series of write-offs and price reductions that left the company with lower margins and exploding losses. The good, better, best strategy I highlighted above helped reduce the company's inventory errors and stabilize margins.

Another improvement has been the subscription business GoPro has added to its cameras. The company has 1.34 million subscribers and subscription revenue in the third quarter of 2021 was up 143% from a year ago to $14 million.

The subscription business is somewhat of a hack for GoPro. The company offers a $100 discount on the Hero10 Black camera if you sign up for a $50 annual subscription, so the company is using a discount to get the "recurring" revenue of a subscription. So far, the strategy seems to be working.

Where does GoPro go from here?

The core Hero line of cameras seems to be doing well, and subscriptions are growing nicely. But GoPro is using tricks like subscription discounts only available through GoPro.com to increase margins per camera sold. That can only help margins for so long, and I don't think GoPro has much pricing power to increase prices more than it already has.

Dig a little deeper and we see that the number of cameras sold each year is not yet back to all-time highs. In 2018, GoPro shipped 4.33 million cameras, which fell to 2.56 million in 2019 and 2.82 million in 2020. In 2021, management expects to sell 3.4 million units, which will be the second consecutive year of growth but still well below 2018 and years prior. There seems to be a cap on GoPro's volume potential somewhere around 3-4 million units, so the company needs to find further growth elsewhere.

The GoPro Max 360 camera was once seen as a potential growth product, but 360 cameras simply haven't caught on at this point. Drones were a complete flop.

I have trouble seeing how GoPro is going to grow much from here. It's just not a product that scales well beyond a very niche market, and there aren't many more levers to pull to get more revenue from each camera sold.

GoPro is what it is

Not every stock needs to be a growth stock and I think GoPro could be a really nice, profitable business long term if it sticks to its lane. Management expects $0.83 per share in non-GAAP earnings this year, plus or minus three cents, and that puts the stock at a nice price to earnings multiple of 11.9.

GoPro could grow revenue slowly, use cash to pay off debt, buy back stock, or even pay a dividend. This could be a great cash-generating company if GoPro plays its cards right. But I don't see this being a growth stock long term.

If you don't expect too much from GoPro, you might not be let down. Let's hope GoPro's management sees its newfound profitability the same way.