Shares of Newegg Commerce (NASDAQ:NEGG) has gained 35.6% this week, according to data from S&P Global Market Intelligence. The electronics and computer hardware e-tailer was having a completely normal Monday with modest trading volumes and no share-price moves to speak of, until the stock suddenly caught fire. Newegg's stock skyrocketed 58% higher in the last two hours of that day's trading session and hung on to about half of those gains for the rest of the week.

Trading volumes picked up quickly as the share price rose. By the end of the day, 24.8 million Newegg shares had changed hands. The same stock has seen an average daily trading volume of about 1 million shares over the last three months.

The company had no significant news to share on Monday. At the same time, there was plenty of social-media chatter around the ticker, but these Newegg fans focused on the stock's move rather than the possible reason behind it.

As incredible as this may sound, all of that action has become fairly normal in 2021. Newegg often trades like a so-called meme stock, where share prices are manipulated by short-term traders with little regard for the quality of the underlying business.

Newegg does have a few features that fit into the meme-stock convention. The company went public on May 20 this year through a reverse merger with a special interest acquisition company (SPAC). This type of market entrance has been popular this year, bypassing most of the traditions and some of the regulations associated with an ordinary initial public offering (IPO) or direct listing. 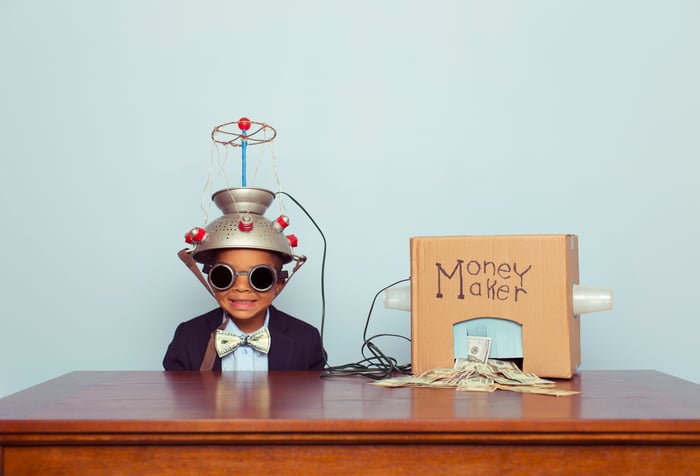 At the same time, SPAC-style stocks have attracted lots of criticism, and many have plunged quickly from their lofty first-day trading prices. Many of these so-called "blank check" companies have turned out to be duds with questionable business prospects. That negative reputation has rubbed off on the good eggs too, including -- in my eyes -- Newegg.

As a result of the unfortunate SPAC-flavored market launch, Newegg has been saddled with incredible volatility in its short history as a publicly traded company. On top of this inauspicious affiliation, the stock has invited a large cohort of short-sellers, who bet on the stock chart turning downward. About 6% of Newegg's shares are engaged in short-seller bets nowadays.

That's the backdrop to this week's crazy market action.

Newegg has filed exactly one quarterly report so far, covering the entire first half of 2021 in a late-August filing. The next report should arrive by the end of November if the company sticks close to the traditional filing cadence of American businesses.

By then, Wall Street analysts should have their first estimates ready as Newegg exits the lockup period of its SPAC deal in the coming weeks. The merger agreement cites a lock-up period of 180 calendar days after the completion of the SPAC merger, during which time certain shareholders can't buy, sell, or exchange Newegg shares or even make public statements promising to do any of those things in the future. When that period expires on November 16, trading volumes should stabilize at a higher level while analyst firms with any Newegg holdings at all will be free to recommend or criticize the stock.

Remember, Newegg has been around since 2001 and first started kicking the tires of a Wall Street launch way back in 2009. This e-commerce veteran is already the first place many gamers and tech geeks look when they need some new computer hardware. SPAC connections and short-sellers aside, Newegg is a proven e-commerce winner, and I expect a long future of profitable growth.

As an early Newegg shareholder, I'm looking forward to a saner trading environment with more transparency and fewer meme-stock shenanigans. Until then, I'm glad to see my shares gain some value, but I plan to hang on to this position for many years to come.

Whatever happens at the end of the lock-up period and in the third-quarter earnings report, I'm ready to buy more Newegg stock if a reasonable opportunity presents itself -- or sit on my hands for another quarter if it doesn't. I'm playing the long game here.