This fintech company is executing an ambitious growth strategy.

PayPal Holdings (PYPL -2.68%) has been an incredible investment over the past four years. Its share price has soared 208%, easily besting the performance of the broader market, and over that time the fintech has grown into a $240 billion enterprise. After such tremendous growth, investors may be tempted to overlook (or offload) this stock. But that could be a mistake.

Here's why I think PayPal could be worth $1 trillion in 10 years' time. 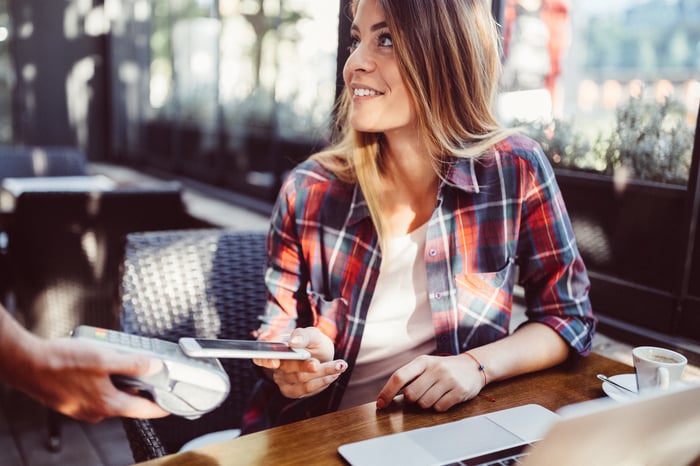 The most accepted digital wallet

PayPal specializes in digital payments. Its portfolio includes consumer-facing products like mobile wallets, which allow users to send, spend, and invest money, and merchant-facing services like payment processing, fraud management, and financing solutions. More importantly, PayPal is the most accepted digital wallet in North America and Europe, used by over 75% of the top 1,500 merchants.

That scale creates a powerful network effect. PayPal currently has 416 million active accounts, including 383 million consumers. And each time someone makes a purchase, it learns a little more about consumer tastes and preferences. That data makes PayPal a valuable business partner, empowering merchants to make relevant product recommendations and deliver personalized deals to the right audience.

More importantly, PayPal's management is executing on an ambitious growth strategy that should reinforce its competitive position over time.

The early results are encouraging. More than 1.3 million merchants now accept PayPal QR codes at checkout, and consumers that use the service spend about 19% more. Likewise, BNPL payment volume has surpassed $8 billion on an annualized basis, and merchants that offer the service typically see payment volume rise by 15%.

However, PayPal's most significant move came in September, when it debuted its new mobile app. The product features a personalized dashboard that, in addition to its previous utility, now connects users with shopping tools, deals, and rewards, as well as bill pay and direct deposit services. And in early 2022, PayPal plans to introduce high-yield savings accounts.

Why does that matter? The number of consumers using a digital wallet is expected to double to 4.4 billion by 2025, and PayPal's new mobile app should help it capitalize on that trend. Moreover, by surfacing personalized shopping deals, PayPal extends its ability to help merchants reach relevant shoppers.

E-commerce has been a significant tailwind for PayPal, helping it deliver strong financial results like clockwork over the last four years. And while eMarketer believes online retail spending will reach $4.9 trillion by the end of 2021, that figure still represents just 20% of total retail spending, meaning PayPal has plenty of room to grow.

Going forward, shareholders have good reason to believe PayPal can maintain its strong financial performance. Management puts its addressable market at $110 trillion, a figure that dwarfs its $1.2 trillion in payment volume over the last 12 months. More importantly, given PayPal's strong competitive position and ambitious growth strategy, I think the stock will be a rewarding investment over the next decade.

To that end, if PayPal can grow sales by 16% per year through 2031, it could achieve a $1 trillion market cap with a price-to-sales ratio of 9.4, which represents its average valuation over the last three years, and a discount to its current valuation of 11.4 times sales. Of course, no one knows the future -- but with the powerful tailwind of e-commerce at its back, PayPal certainly has a shot at becoming a trillion-dollar business in a decade or less.