Quarterly financial updates are giving investors a better look into each EV business.

There's been a lot of investor excitement in the electric vehicle (EV) sector this week with Rivian's (RIVN -2.03%) highly anticipated public debut. It also didn't hurt that the federal infrastructure bill that was just passed by Congress has funds dedicated to helping build out the infrastructure needed to handle the expected EV adoption rate. But the businesses themselves still need to perform, and that helps explain why quarterly financial reports drove shares of Lordstown Motors (RIDE -1.64%) lower Friday, while Blink Charging (BLNK -1.65%) and Hyzon Motors (HYZN 5.16%) shares soared. As of 11:50 a.m. EST, shares of those three EV names had moved as follows: 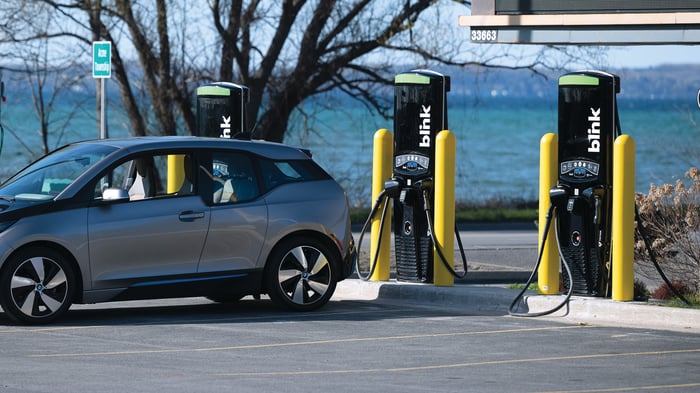 Blink Charging exceeded estimates for its third quarter, with record revenue that soared more than 600% above the year-ago period. It should be noted that most of the $6.7 million in revenue came from product sales, rather than recurring service revenue. Product sales are currently what the company is focusing on to build out its network. Blink's chairman and CEO Michael D. Farkas said in a statement, "we made great strides increasing our network of property partners, winning exclusive, multi-year agreements that we anticipate will result in additional charging station deployments and revenue generation."

Hyzon also impressed investors this morning with its third quarter report. It announced its first two purchase orders for a total of 62 hydrogen fuel cell electric trucks from a previously announced potential 500 truck order with a Chinese logistics company. The company also confirmed its forecast for 85 vehicles to be shipped before Dec. 31, 2021. Hyzon said it will have vehicles on the road across four continents by that time.

But Lordstown, just after it announced what the markets took as a positive development, disappointed investors by pushing its production schedule back once again. After the market close yesterday, Lordstown reported its third quarter results, and informed investors that it won't begin commercial sales of its Endurance electric pickup truck until at least the third quarter of 2022. In its previously reported quarterly update in Aug. 2021, the company said it would begin deliveries early in the second quarter of 2022.

Lordstown has been in the midst of management changes beginning when its former CEO was accused of misleading investors with false product pre-order data. And it will now turn production over to electronics manufacturing company Foxconn, along with most of its factory. Foxconn will gain warrants from the transaction, and the companies plan to cooperate in potential future product development.

With all of this news, Blink could be the biggest winner this week, after the passage of the federal infrastructure bill. The bill that is expected to be signed by President Biden allocates $7.5 billion to help build out EV charging infrastructure. That could go a long way to help Blink and other charging network companies, especially considering that Blink is currently holding just $186.7 million in cash and marketable securities on its balance sheet.

Investors were happy to see progress being made ahead of any federal grants, but there may be more to come as that money is put to work. But investors should also realize that the stock remains speculative with a valuation giving it a forward price-to-sales ratio of greater than 100, according to data from YCharts. It will still take a lot of growth to bring that to a more reasonable level.