These stocks should benefit as the infrastructure bill becomes law.

After lots of debate and delay, the infrastructure bill is on its way to President Joe Biden, who will sign it into law. The $1 trillion spending package will provide funding for roads, bridges, ports, rail, water, the electric grid, broadband internet, and so much more. It should provide a significant long-term boost to the U.S. economy.

The spending package should also boost the fortunes of companies focused on infrastructure. Three infrastructure stocks that these Fool.com contributors see as big beneficiaries are Cleveland-Cliffs (CLF 0.20%), Xcel Energy (XEL -1.50%), and United Rentals (URI 0.47%). Here's why they could be long-term winners as the U.S. makes a major investment to upgrade its aging infrastructure.

Reuben Gregg Brewer (Cleveland-Cliffs): Over the past couple of years Cleveland-Cliffs has turned itself from a steel industry supplier into an integrated steelmaker that also sells key competitors iron ore pellets and other steelmaking inputs. Its core steelmaking assets are largely blast furnaces, which create primary steel from iron ore. This is a capital-intensive process that requires high utilization rates in order to turn a profit. But, if the infrastructure bill heats up demand, that shouldn't be a big issue. Notably, when operating at high rates, blast furnaces are often more profitable than the electric arc mini-mills that underpin competitors like Nucor.

At the same time as its mills are doing well, Cleveland-Cliffs could also be benefiting from increased demand for its steelmaking ingredients. Basically, Cleveland-Cliffs wins and wins again as its customers, which are also its steelmaking peers, benefit. It is, thus, heavily leveraged to the elevated steel demand likely to come from increased infrastructure spending. 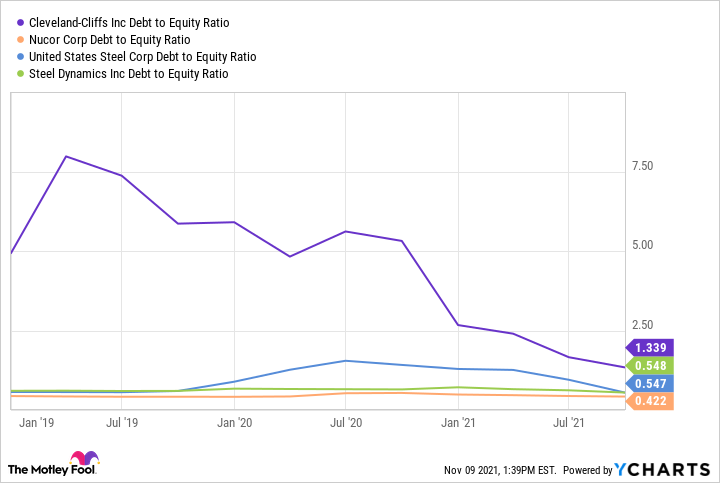 To be fair, this isn't exactly news to Wall Street. Cleveland-Cliffs' stock is the best-performing North American steel mill over the past year. However, thanks to the mergers used to create it, the steelmaker also has the most leverage, with a debt-to-equity ratio of 1.3 times, twice as high as the next competitor. But a good industry upturn can help generate the cash it needs to deal with its relatively weak balance sheet. And, even if the stock doesn't continue to outdistance its peers, it will have the opportunity to strengthen its industry position just the same.

Aligning its investment plan with the infrastructure bill

Matt DiLallo (Xcel Energy): The infrastructure package includes significant funding for the energy transition to cleaner alternatives. For example, it features $7.5 billion for electric vehicle (EV) charging stations and another $65 billion to improve the reliability and resiliency of the electric grid. The bill will also boost lower-carbon fuel sources like green hydrogen.

That aligns perfectly with Xcel Energy's investment plan. The utility has committed to achieving net-zero carbon emissions by 2050 and is investing billions of dollars to achieve that bold goal.

In addition to investing heavily in renewable energy, Xcel Energy is spending billions of dollars on upgrading its transmission system. It's also building EV infrastructure, including installing charging stations in major transportation corridors and underserved communities. It sees the potential to invest $750 million on EV charging infrastructure in the 2022 to 2026 time frame and upward of an additional $1.7 billion in the back half of the decade. Meanwhile, it sees significant potential in hydrogen. The company said it could invest up to $4 billion over the coming decade on hydrogen-related projects to blend that emissions-free fuel into its natural gas system.

The infrastructure bill should enhance Xcel's ability to make these investments. The company could tap into government-funded programs from the infrastructure bill to support its spending plans. That could enable it to achieve its decarbonization efforts while creating significant value for shareholders by growing its earnings and dividend.

Winning even before infrastructure spending kicks off

As federal spending on infrastructure picks up, so should demand for heavy machinery like the ones United Rentals rents out. In fact, the company is already witnessing higher demand even before federal spending kicks off: In October while announcing its third-quarter numbers, United Rentals raised the upper end of its 2021 revenue outlook to between $9.6 billion and $9.75 billion, and expects to generate cash from operations worth $3.55 billion at the midpoint versus its earlier projection of $3.45 billion. Growth of 22% in its third-quarter rental revenue encouraged United Rentals to upgrade its outlook.

As the largest equipment rentals company in North America with 13% market share, with a fleet of nearly 770,000 machines, presence in 49 states in the U.S., a highly diversified customer base, and an acquisitive growth strategy to expand its footprint, United Rentals looks well positioned to win as infrastructure spending in the U.S. gathers steam.