I always feel like an imposter when I write about cryptocurrency because I don't understand the technology. Bit Digital (BTBT 7.50%) is a cryptocurrency miner. I don't know what that means, actually. Nobody is digging in the dirt. I got that part. I don't know why the heck they decided to call themselves "miners." The last thing I want to invest in is a gold mine. "I got a map to the gold! Invest in me!"  No thanks.

My cryptocurrency investment is limited to my bank stock, Silvergate Capital (SI 40.02%). I feel like the Silvergate slogan should be, "We understand the technology," which puts them ahead of 99% of bankers in the world. Just the other day, The New York Times published an article about the big banks and cryptocurrency. Jamie Dimon, the chief executive officer of JPMorgan Chase (NYSE: JPM), was quoted in 2014 as saying that Bitcoin (BTC 2.90%) was a "terrible" store of value. Five years later, his bank was trying to introduce its own coin.

Meanwhile, Tom Montag, the chief operating officer of Bank of America (NYSE: BAC), after disparaging cryptocurrency for years, is now asking people to explain to him how it works.

I wouldn't be in a hurry to short the people who have been right from the beginning. In Bit Digital's case, here are two reasons why. 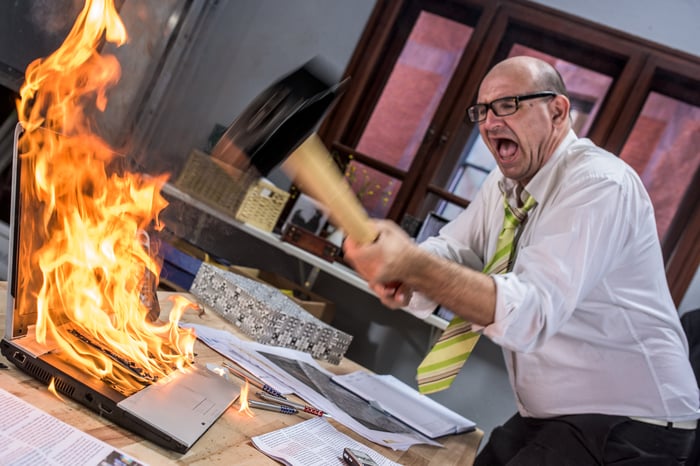 Bit Digital has some of the best financials you will see in the stock market. Numbers change all the time, of course, and even a bad company can have an awesome quarter. But this company is killing it. Profit margins sit at 39%, and its return on equity is 62%. Both of those numbers beat Microsoft (NASDAQ: MSFT), for instance. And the company has revenue growth of 4,100%.

You sometimes see amazing numbers like that in tiny companies. Bit Digital had $92 million in revenue in the last 12 months. And the stock has tripled in that time frame. And it is cheap, at 14 times trailing earnings and five times sales. Yes, I know it's cryptocurrency. And maybe the numbers will be bad next quarter, or next year. But are you sure you want to short this stock? 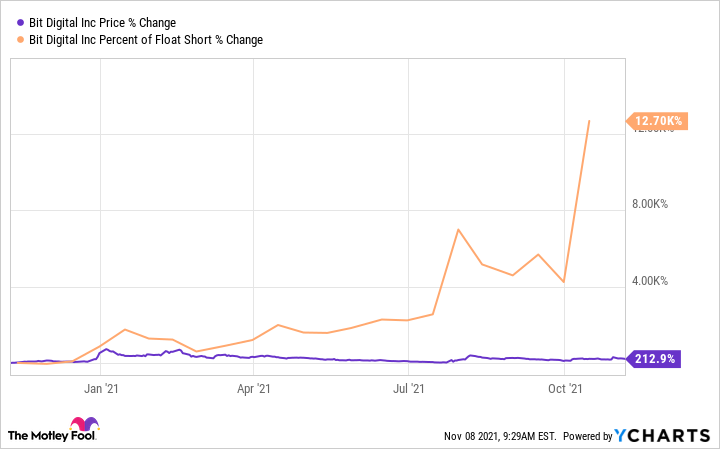 If I were a short-seller, that chart would make me nervous. I never short anything, because it puts you in debt to the banks, and it puts you on the wrong side of the miracle of compound interest. In the stock market, it pays to be an optimist. Investing like a negative Nellie will get you killed. For instance, Steve Eisman, star of The Big Short, made a high-profile short on Tesla (NASDAQ: TSLA). That one blew up in his face and he had to abandon his position. Shorts get squeezed all the time, even smart guys like Eisman. (Make that movie, Hollywood!) And I'm not convinced that the Bit Digital shorts are all that smart. Here's another scary chart. 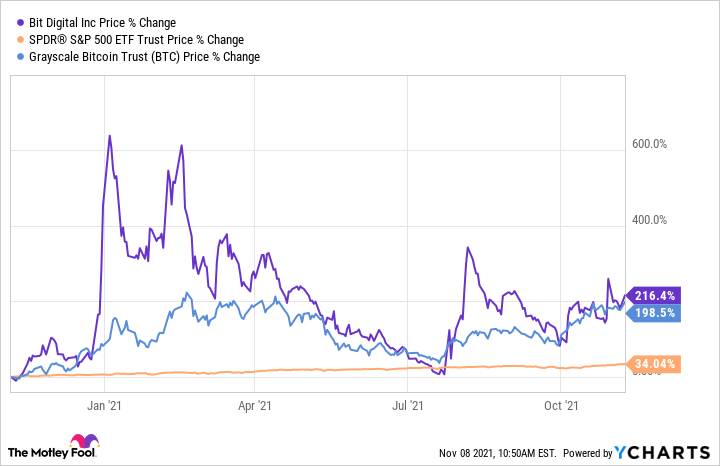 The Bitcoin mining stock is basically tracking the price of Bitcoin. Except when Bitcoin goes up, this stock goes way, way up. I'm in no hurry to buy Bitcoin. But man, oh man, I'm sure not shorting Bitcoin. You can yell all you want about the madness of crowds, but literally all the currencies in the world work on the concept of supply and demand. The more people who get on board the Bitcoin train, the safer it is. As fund manager Bill Miller argued, "Bitcoin is a lot less risky at $43,000 than it was at $300."

2. Is it crazy to be worried about dollar inflation?

Yes, people are now spending dollars to buy Bitcoin, on a theory that it will rise in value, and they will be able to sell it to somebody else for more dollars. Of course what we all really want are more dollars. We all have this confidence in dollars, because we know dollars can buy stuff like food and housing and cars and clothing and gasoline. But the crazy inflation we're now seeing, where dollars are worth less and less? Bitcoin is a hedge against that.

You know the people on the internet who tell you the sky is falling and predict a stock market disaster? Like, for instance, Robert Kiyosaki, the author of Rich Dad, Poor Dad. He says there's a "historic stock market bubble." And his suggested defensive posture is to buy gold, buy silver, and buy Bitcoin. Hello.

Unlike Bitcoin, the dollar is an actual currency, and has utility. We use it to buy things. But when the government inflates the dollar, and runs trillion-dollar deficits, it's natural for people to suspect that the dollar will be a lousy store of value. And that's why people run to commodities like gold or silver in bad economic times. You might want to add Bitcoin to that list of safe havens, as a hedge against insanity in other places in the economy.

Personally, I'm bullish on the stock market and the U.S.A. But if we do lurch into bad economic times, I wouldn't assume that it's Bitcoin holders who get hurt in that environment. They might do quite well, actually. And it follows that highly profitable and fast-growing Bitcoin miners would also do well. It's the shorts who would get killed in that scenario.

Why Cryptocurrencies and Crypto Stocks Jumped This Week
410%