Sales growth in the e-commerce giant's core business has moderated and profitability is under pressure following a pandemic-related boom in 2020.

This marked the second straight disappointing quarter for Amazon. But while Amazon stock initially pulled back following the results, the shares have since regained all of that lost ground and then some. 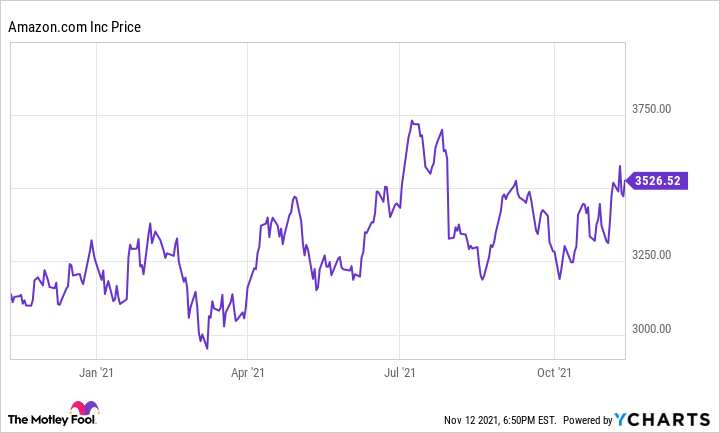 In other words, investors don't appear the least bit fazed about Amazon's recent slowdown in growth. Considering that Amazon stock trades at an eye-popping $1.8 trillion valuation, this blasé attitude may prove costly in the long run.

Another quarter of moderating growth

In the second quarter, Amazon's sales rose 24% year over year on a currency-neutral basis, down from a 41% growth rate in the first quarter. The slowdown was particularly notable because the company held its Prime Day shopping bonanza -- always a big sales driver -- in June this year, compared to October of 2020.

At the time, Amazon said that growth would slow further in the third quarter, with sales rising 10% to 16% year over year. It also estimated that operating income would fall to between $2.5 billion and $6 billion, down from $6.2 billion a year earlier -- although Amazon has often beaten its profit forecasts by a wide margin.

Amazon's fourth-quarter guidance also fell short of analysts' estimates. The company expects sales to grow just 4% to 12% year over year to a range of $120 billion to $130 billion, with operating income between breakeven and $3 billion: down from $6.9 billion a year ago. Analysts had expected revenue of $142.1 billion and EPS down just slightly compared to Q4 2020. Since the earnings release, analysts have slashed their full-year 2021 and 2022 earnings estimates for Amazon by approximately 22% each.

Putting the results in context

Amazon's core retail business faces a number of headwinds right now, including a nationwide labor shortage in the U.S., widespread inflation, and surging freight costs. Clearly, those factors are contributing to the pressure on its margins. Meanwhile, the pandemic pulled a substantial amount of e-commerce growth into 2020 from 2021 and subsequent years. Looking at the past two years together, Amazon's business has grown at a healthy 25% compound annual growth rate.

That said, many U.S. retailers have been reporting record profits this year, as buoyant demand has boosted sales and reduced the need for discounting. Moreover, Amazon's sales growth didn't just moderate compared to 2020. Its 10% growth in North America last quarter actually trailed the 12.8% increase in total U.S. retail sales. That may be the first time in history that Amazon's sales grew slower than the broader retail industry. Meanwhile, the sharp decline in Amazon's profitability calls into question the core retail business' long-term margin potential. To be fair, short-term cost headwinds and an investment cycle are weighing on margins now. However, temporary tailwinds may have helped the company's margins in late 2020 and early 2021, making shareholders overly optimistic about Amazon's long-term margin potential.

Can AWS save the day?

The one bright spot in Amazon's quarterly report was accelerating growth at Amazon Web Services (AWS). Revenue surged 39% -- up from 29% growth a year earlier -- to $16.1 billion. AWS' operating margin has leveled off around 30%.

AWS is clearly an extremely valuable business due to its high margins and rapid growth. That said, while analysts see plenty of runway for growth in this business, AWS' growth rate is likely to moderate again over the next few years (along with the broader cloud market). At a valuation of 14 times sales -- a small premium to Microsoft, which has higher margins but isn't growing as quickly -- AWS would only account for half of Amazon's $1.8 trillion market cap.

Unless its growth reaccelerates or its profit margin expands dramatically, Amazon's core retail business isn't worth $900 billion. Thus, investors should keep a close eye on Amazon in 2022 to see if the company's core business can regain its mojo.