Fiverr offers the combination of a depressed stock price and excellent prospects.

Many pandemic winners have seen their fortunes reverse in 2021 as their growth slows. Take Fiverr International (FVRR -5.77%), for example. Its stock took off in 2020, gaining 730% as people scrambled to find work-from-home opportunities, including freelance roles. But shares were down 17% year to date -- prior to the latest earnings report -- though they have jumped following a strong showing in the third quarter.

In another demonstration of its staying power, even after many offices and businesses have opened up around the world, Fiverr nailed its third-quarter earnings. 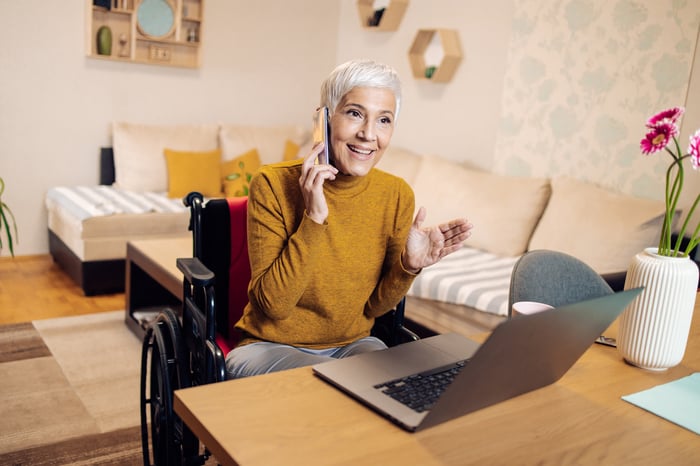 Revenue increased 42% year over year to $74.3 million, coming in above the previous guidance of $68 to $72 million. The top-line result was powered by a 33% increase in active buyers and a 20% increase in spend per buyer. Those numbers point to a satisfied, growing customer base that's increasing their use of the platform. Adjusted earnings before interest, taxes, depreciation, and amortization (EBITDA) of $7.3 million was more than double the high end of the guidance range.

Management also raised its full-year revenue outlook with growth now expected to land between 54% and 56% (up from 48% to 52%). The EBITDA outlook similarly increased from $13 million to about $20 million at the midpoint. It's hard not to be impressed by those results, and it's even harder to argue the company's opportunities peaked last year.

Where the opportunities are

Fiverr estimates it has a $115 billion total addressable market in digital freelance services with only a tiny fraction of the freelance market currently online. It's still a tiny company with a long runway of growth, and it's launching new services and features to capture market share.

So far in the fourth quarter, it has added business management capabilities for freelancers and small businesses with Fiverr Workspace. It also acquired freelancer management company Stoke, whose services it will offer to large clients,as well as CreativeLive, a creative educational platform.

These are in addition to Fiverr Business, its segment focused on large clients that offers a suite of tailored solutions. These efforts have improved its take rate, or the amount it collects in fees for projects born on its platform. The take rate increased from 27.0% in the second quarter to 28.4% in the third quarter. Satisfied buyers are clearly gaining enough value from these additional services to pay a premium for them.

However, the third quarter saw gross margin fall 10 basis points year over year, and Fiverr's net loss widened from just $0.5 million last year to $14.3 million. That's mostly due to aggressive research and development spending, as well as a robust marketing campaign, both of which are contributing to the strong sales growth.

Fiverr stock began to fall at the beginning this year, but it did bounce back following the latest earnings news. As of this writing, shares are still expensive, trading at 27 times trailing 12-month sales.

But there's a reason for the pricey valuation, and that's future opportunity. As the company's growth efforts pay off with a large and engaged customer base, it should start reporting profits, eventually reducing its premium. In the meantime, Fiverr is a great long-term bet in this sector.

Is There Any Rebound in Sight for Fiverr International Stock?