The stock has made early investors rich -- but can it do the same for those who buy it today?

Early investors in COVID-19 vaccine makers Moderna and Novavax (NVAX 2.82%) have earned significant returns over the past couple of years, with both stocks up over 1,000% since the start of 2020 (the S&P 500 has only risen by 44% during that time frame). Novavax's 4,000% returns are astronomical even though the company's vaccine hasn't yet gotten the go-ahead from the U.S. Food and Drug Administration (FDA) -- in fact, it hasn't even filed for an Emergency Use Authorization (EUA) yet.

It's a risky stock to be holding, but the good news is investors can hedge their positions. However, if you don't already have Novavax in your portfolio, is it worth taking a chance on the stock today? 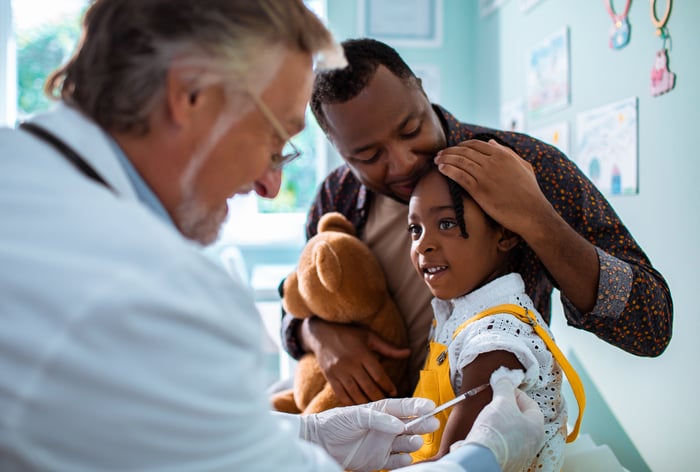 Its vaccine has obtained approval -- just not in the U.S., yet

On Nov. 1, Novavax announced the first authorization for its COVID-19 vaccine in Indonesia. It also anticipates more approvals coming from other parts of the world in the weeks ahead, including from India and the Philippines. The company has filed for Emergency Use Listing from the World Health Organization, which could lead to even more countries approving its vaccine.

In the U.S., Novavax plans to submit an application for an EUA with the FDA before the end of this year, but there's no guarantee it will get the go-ahead from the agency. Nearly 60% of the U.S. population is fully vaccinated against COVID, and former FDA commissioner Dr. Scott Gottlieb recently said he believed that the pandemic may be over in the U.S. by January (becoming endemic at that point) -- so there may not be a compelling reason for the agency to approve another vaccine.

Would that be enough to justify its valuation?

Novavax reported a net loss of $322.4 million for the period ending Sept. 30, with revenue totaling $178.8 million. The company's top line rose 14% year over year due to an increase in royalties, while revenue from grants and government contracts declined. If it gets multiple vaccine approvals, that could go a long way in strengthening Novavax's top line and making it a better investment.

The company anticipates having the capacity to produce more than 2 billion doses of its vaccine next year. At a projected price of $16 per injection, that could translate into more than $30 billion in revenue for Novavax next year. But that would be under a best-case scenario in which it could sell all of its production at that price.

Today, Novavax's stock trades at 10 times its revenue, compared to a multiple of 8 for Moderna, but investors are buying it for its potential rather than what it has accomplished thus far. If Novavax is able to obtain widespread approval for its COVID-19 vaccine, there could be a path for it to deliver the revenue growth it needs to be an attractive investment, even at its nearly $13 billion valuation.

Should you buy Novavax stock today?

There is hope beyond just its COVID vaccine, as Novavax also has an influenza vaccine (Nanoflu) that could generate $550 million in peak annual revenue. But the hype around Novavax is undoubtedly because of its COVID-19 vaccine, and if that underwhelms, it could lead to a significant sell-off of the stock. It certainly doesn't help that there are also multiple companies making pills to battle COVID, so there may be less of an incentive for unvaccinated individuals to opt for a shot.

It may not be too late to buy Novavax, but that's only under the assumption that it has a big year in 2022 and that countries approve its COVID-19 vaccine. It's dangerous for investors to buy a stock based on a best-case scenario. So unless you have an extremely high risk tolerance, you're probably better off going with other growth stocks instead.