Investing early in biotech and pharmaceutical companies can lead to some massive multi-bagger returns. However, these returns almost always come with vast amounts of risk and volatility tied to the pipeline of products.

These risks seem almost unavoidable when looking at stocks with drugs in clinical trials. Yet there is one company that offers the potential to grow alongside these drug-makers, all while providing safety through diversification to the broader industry. This company is Medpace Holdings (NASDAQ:MEDP), a clinical trial specialist whose mission is to "accelerate the global development of safe and effective medical therapeutics." 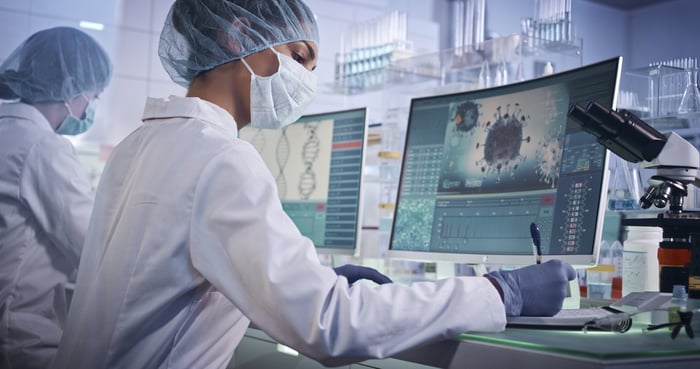 Streamlining the complexities of clinical trials

After going public in 2016, founder-led Medpace acts as a guide, or mentor of sorts, to companies trying to navigate the tedious clinical trial process. Spanning the biotech, pharmaceutical, and medical device industries, the contract research organization (CRO) aims to dot all the i's and cross all the t's involved with getting rare U.S. Food and Drug Administration approval.

Its vast array of capabilities and technologies allows it to act as a one-stop shop for drug and device makers of all sizes. Whether it is study start-up, clinical monitoring, regulatory affairs, or even biometrics and data sciences, Medpace's solutions are a must-have for many small to mid-sized biopharmaceuticals.

While the company does face intense competition from other larger CROs, such as Laboratory Corporation of America, Icon, and IQVIA, its focus on smaller, early-stage biotechs makes it unique. Perhaps due to this focus, Medpace traditionally offers its full suite of services to customers, rather than only allowing them to outsource a portion of their operations to be managed.

According to Grand View Research, the biotechnology market should surpass $2 trillion by 2028. This puts Medpace in a beautiful position to thrive alongside the continually expanding base of newcomers to the industry.

A widespread customer base means diversification for investors

Thanks to this focus on smaller biopharma, Medpace's largest 10 customers only account for 24% of total revenue as of its most recent quarter. While its concentration on small biopharma may sound counterintuitive to safety and diversification, this large customer base approach to diversification has led to the company tripling its revenue in the five years since it went public.

In addition to this low customer concentration risk, Medpace has successfully balanced its exposure to specific therapeutic areas. During the third quarter, oncology was the company's most significant area of concentration but only accounted for 32% of overall sales.

With this unique focus upon a wide array of smaller biopharmaceuticals, Medpace offers investors a fantastic opportunity to not only participate in the ongoing biotechnology boom but to do so in a diversified manner. As the initial public offering (IPO) market remains hot and access to capital stronger than ever, prospective biotech start-ups should continue driving sales for the company.

Medpace reported $296 million in revenue in the third quarter which was a 28% increase over last year. The total revenue reported in 2020 was $926 million which was steady growth over the prior years. The company has already reported over $1 billion for the period trailing-12-months. Fueled by these growth drivers, management is guiding for year-over-year (YoY) revenue growth of 23% for 2022 as they expect to continue carving out their profitable niche in the market.

Sporting a backlog that grew 29% YoY to $1.8 billion, Medpace's market capitalization of $8 billion looks quite appealing to investors, as this backlog acts like a giant safety net. On top of this backlog, the company's book-to-bill ratio grew from 1.22 to 1.38 YoY for the trailing-12-months.

This book-to-bill is a great metric to gauge incoming sales for Medpace, as it simply takes new bookings divided by revenue. Generally speaking, anything above one is excellent, as this implies that demand for the CRO's services is robust. While this increasing demand is exceptional, it means little to investors if the company cannot do it profitably. However, Medpace has demonstrated beautiful profit margin expansion since its IPO in 2016. 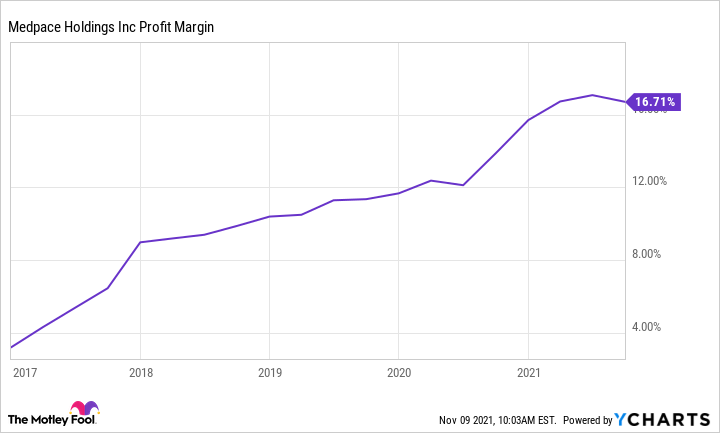 Not only has the company turned into a profit machine, but it has historically had a free cash flow conversion rate above 100%, meaning that it converts this net income to free cash flow at an outsized rate. All in all, Medpace is a diversified, genuine cash cow positioned beautifully in a booming biotech market. Thanks to these factors, the company is an excellent option for investors looking for a safer way to benefit from the biotech revolution.