A price cut from an analyst had some traders hitting the sell button.

Compugen (CGEN -0.32%) stock didn't begin this week in a healthy way. The clinical-stage drug company's shares fell by just over 7% following a price target cut from an analyst tracking the company.

Prognosticator Mark Breidenbach of Oppenheimer has trimmed said target by just over 10% to $17 per share from the previous $19. Yet he is maintaining his outperform -- i.e., buy -- rating on the shares. 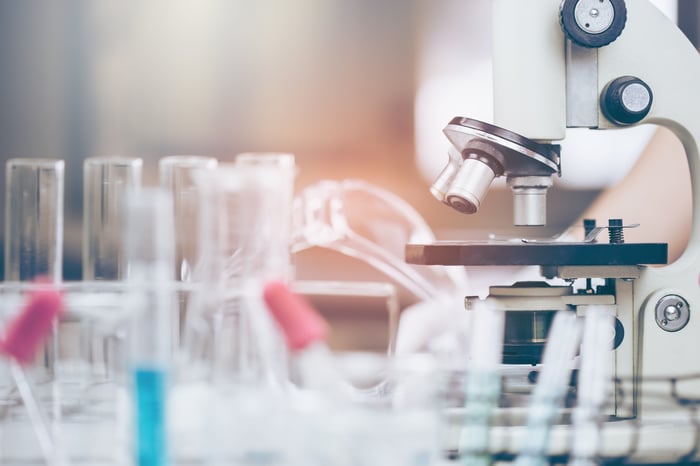 That move came one business day after Compugen reported the results of its Q3, during which the company earned $6 million in revenue, against exactly $0 in the same quarter a year ago. The company also shaved its net loss to just under $6.2 million compared to a nearly $7.8 million loss in the prior-year period.

More crucially, Compugen updated investors on its pipeline, and Breidenbach was clearly encouraged by what management had to say. He wrote in a new research note that the latest data on the company's COM701 oncology drug, currently in clinical trials both as a monotherapy and in combination with other treatments, shows "clear evidence of disease stabilization in heavily pretreated patients."

But, he points out, "We believe investors expected to see objective responses in the triplet study, but we note the all-comers trial enrolled an exceptionally difficult patient population (10 median priors)."

Referring to COM701's combination therapy trial with two other drugs, Breidenbach added that "While the triplet regimen was safe, we acknowledge the initial results did little to validate the specific tumor types being evaluated in expansion cohorts."

Because of all this, Breidenbach believes the timelines for the trials COM701 is involved in will be extended, although not to a great degree. If this occurs, it will be a minor setback for Compugen. Regardless, biotech investors tend to take any setbacks in the biotech sector hard -- hence their strong reaction to the analyst's price cut.

Why Shares of Compugen Rose on Thursday

Why Shares of Compugen Rose 16.5% on Wednesday

Why Shares of Compugen Jumped 17.86% on Thursday