The House of Mouse is still constrained in many respects by the pandemic.

The Walt Disney Company (DIS -2.21%) reported fourth-quarter fiscal 2021 results on Nov. 10. The announcement highlighted a company that is regaining momentum after pandemic-caused disruptions with more room to go. One of the questions that investors had during pandemic shutdowns of several of its businesses was how consumers would respond once they reopened.

One theory was laid to rest in 2021. It was thought that when these businesses reopened, there would be a quick snap-back as consumers unleashed pent-up demand after being stuck at home. Instead, what's becoming more likely is a steady recovery, more like a dimmer light switch being turned up gradually. Indeed, several comments from Disney management indicate that the business will not be at full strength until at least the end of fiscal 2022. 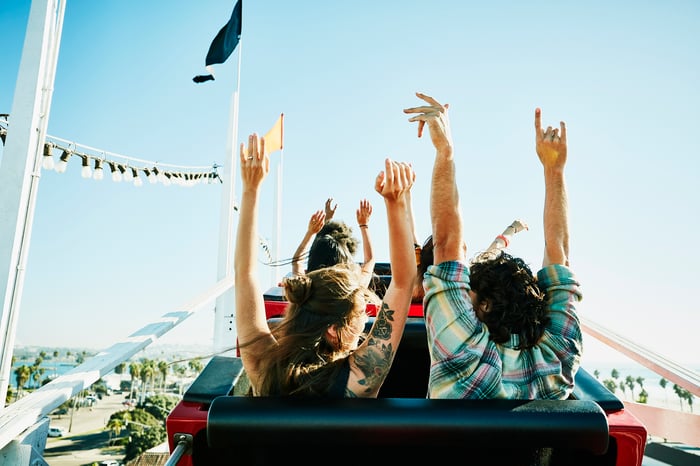 You couldn't tell from looking at Disney's reported revenue for fiscal 2021 that it was operating under significant constraints. The House of Mouse reported overall revenue of $67.4 billion in 2021, a 3% increase from 2020. However, that was still below the $69.6 billion reported in 2019 before the outbreak.

Additionally, since late 2019, Disney has placed an increasing emphasis on its direct-to-consumer streaming business. Investors too have shifted focus to the same. Disney's stock price has responded more to growth in streaming subscribers than to anything else. By limiting its ability to produce content, the pandemic unfortunately did not allow Disney to invest in the development of its streaming segment as much as it would have liked.

That situation is likely to end in 2022. Here is what management had to say on the matter in its most recent conference call:

In total, we are nearly doubling the amount of original content from our marquee brands, Disney, Marvel, Pixar, Star Wars, and National Geographic, coming to Disney+ in FY '22, with the majority of our highly anticipated titles arriving July through September. This represents the beginning of the surge of new content shared last December at our Investor Conference 2.0.

Disney's theme parks get a considerable amount of business from visitors traveling across borders. But the company does not expect cross-border visitors to come back in full force until the end of 2022. A number of countries still have various restrictions in place for crossing borders, making it inconvenient for folks to travel.

However, on a global basis, about 29 million people per day are receiving COVID-19 vaccines, and Disney management is hopeful that the growing number of vaccinated people will encourage more visitors by the end of the year.

Moreover, Disney's cruise ships are all sailing the seas again. And Disney has a new ship, The Wish, that is coming online in June of 2022. The Wish's first season on the oceans is already 90% booked.

Disney shareholders are looking ahead

Disney's management is not the only group looking forward to 2022. Shareholders are also hoping for better results in the coming year. Because Disney's stock has lost a disappointing 12% so far in 2021, investors are eager to turn the page and see if Disney's next chapter brings back the magic.