The first Canoos will ship earlier than expected.

Shares of electric vehicle start-up Canoo Holdings (GOEV 5.08%) were moving higher on Tuesday, after the company reported third-quarter earnings and said it will begin production of its first vehicle sooner than expected.

Canoo reported its third-quarter results after the U.S. markets closed on Monday, and they were better than expected. The company, which has no revenue, reported a net loss of $80.9 million ($0.35 per share), nearly all of it attributable to product development and administrative costs. Wall Street analysts polled by Thomson Reuters had expected a larger loss, $0.44 per share.

But Canoo's earnings "beat" wasn't the real story. The big news is that the company now expects to begin production of its first vehicle, a battery-electric passenger van called the Lifestyle Vehicle, before the fourth quarter of 2022. That's sooner than expected. 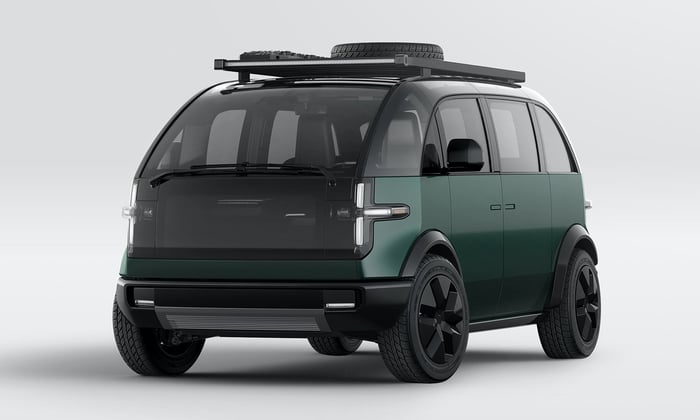 There was more good news: Canoo announced that it will build its headquarters and a research and development facility in Arkansas, and that it will add additional facilities near its under-construction factory in Oklahoma. Those sites weren't chosen because Canoo's executives liked the scenery: They come with about $100 million in incentives from economic-development authorities in the two states.

That's why the stock surged higher on Tuesday.

As you'd expect, Canoo is ramping up its capital expenditures as it completes its factory and prepares to begin production next year. It told electric vehicle investors to expect capex of between $60 million and $80 million in the fourth quarter, on top of the roughly $100 million it spent in the first nine months of 2021.

Why Shares of Canoo Are Rocketing Higher Today