AMC Entertainment Holdings (AMC) reported third-quarter earnings on Nov. 8, and the announcement highlighted that management is thinking way outside of the box.

Encouraged by a group of nontraditional shareholders, CEO Adam Aron is considering several surprising ways to add incremental revenue to its mainstay movie theater business. While some of the ideas seem far-fetched, they do offer the potential to hit it big if one of them actually works out. Let's look closer at a few of these options. 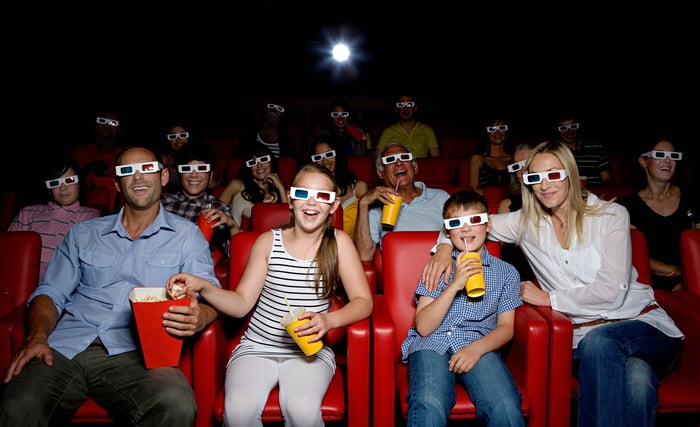 Management is getting creative

During the company's third-quarter conference call, Aron announced that AMC is expanding within the popcorn-selling industry in a significant way. What's different now is that the chain wants to sell its popcorn outside of its theaters. Aron touted why he thinks this move will be a success:

There are two significant advantages that AMC enjoys in that regard. First, our brand, AMC Theatres Perfectly Popcorn, has credibility. After all, our company has been selling popcorn for 101 years. And on a peak day, we already sell some 50 tons of the stuff. And I ask you, is there anything that tastes better than real movie theater popcorn? Is there anything that tastes better than popcorn from AMC?

Indeed, in Q3, AMC made $265 million in revenue on sales of food and beverage. Those sales came with a relatively little cost of $43 million. To put those figures into context, the company made $763 million in overall revenue and lost $224 million on the bottom line. It's no surprise then that the CEO wants to expand on the more profitable segment of its business.

Almost in the same breath, the CEO mentioned that the company is in discussions with studios to create non-fungible tokens (NFTs). The assets are gaining popularity, and AMC is trying to figure out how to ride that tailwind.

Yet another idea AMC is considering is to launch its own cryptocurrency. Here's what Aron said about cryptocurrencies in the company's conference call: "I can confirm today that we have been exploring with third parties over the past few months both how we can accept cryptocurrency and if it is feasible for AMC to consider even launching our own cryptocurrency."

Do any of these ideas have a chance to succeed?

AMC has had a lot of success at selling very expensive popcorn inside its theaters. Perhaps that success has led management to believe that the company has uniquely good-tasting popcorn. However, folks visiting an AMC theater are not allowed to bring food inside. So maybe AMC has delicious popcorn, or maybe people buy it because there is no other choice. The company will find out soon enough.

In my opinion, the NFT and cryptocurrency ideas actually have more merit. AMC is building a loyal following among a new class of investors. The shareholders are strong supporters of AMC, willing to buy and hold the stock despite the company's financial struggles. As of its most recent quarter, AMC has $5.5 billion of debt on its balance sheet and has lost money on the bottom line in five of the past 10 years.

NFTs and a cryptocurrency might be another way management can capitalize on its strong fan support. It can be an avenue to create assets that will cost the company little money, and which it can sell at substantially high markups.

Overall, AMC management has done an excellent job throughout the pandemic. It has seemingly used every tool at its disposal to save the company from potentially running out of cash when theaters were shut down -- to a point where it is now going on the offensive with moonshot ideas. As for their chances of success? It's certainly hard to tell at this point, and it may depend mainly on how much AMC's loyal fans are willing to support these efforts.