Here are two different views on the robotic surgery stock.

It wasn't all that long ago that using robots to assist in surgeries would have been the stuff of science fiction. But for the past couple of decades, robotic-assisted surgery has been a reality thanks to Intuitive Surgical (ISRG -1.31%).

The healthcare stock has been a huge winner through the years, skyrocketing more than 17,500%. Is Intuitive still a good pick for investors? Here are the perspectives from two Motley Fool contributors, one with a bullish outlook and the other with a bearish view on the stock. 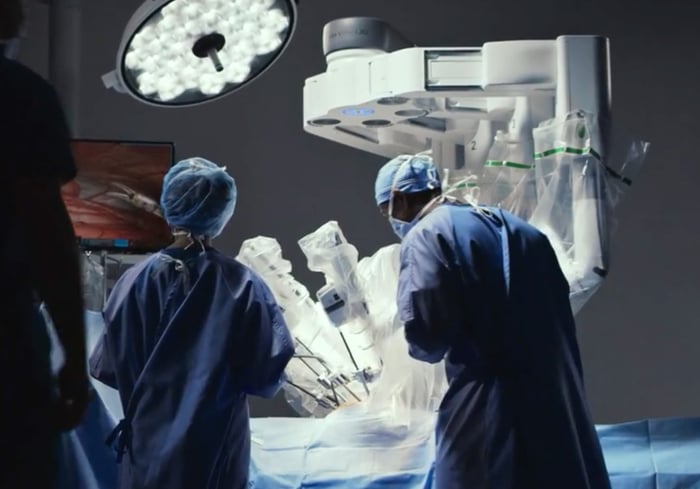 Bullish take: Only in the early innings

Keith Speights: Investors shouldn't buy Intuitive Surgical because of its past success. There are plenty of companies that perform well for a while but then lose momentum. But I don't think Intuitive will be one of them. Actually, my view is that this company is only in its early innings with a long growth path ahead.

One key reason for my optimism is the large market opportunity that Intuitive currently targets. The company estimates that around 6 million procedures are performed each year for which its systems could be used with existing regulatory clearances. That number is roughly five times greater than the number of procedures for which Intuitive's systems were used in 2020.

This market will almost certainly grow significantly in the future. Aging populations across the world are likely to drive higher demand for the types of surgical procedures that are optimal for robotic assistance.

More importantly, though, Intuitive is developing new technology that should expand the market. The company believes that there are another 14 million soft-tissue surgical procedures performed each year that it will be able to target with products in development. I think this is an unstoppable stock that I don't plan on ever selling.

Adria Cimino: I'm generally bullish on Intuitive due to its strong market position. But, as with any stock, there are always some negative points that eventually could weigh on performance. Today, I'll focus on a couple that are important to consider before buying shares of this robotic surgery giant.

One factor that could hold back Intuitive shares is the company's size. Intuitive's market capitalization has climbed more than 400% over the past five years to about $126 billion. From here, it may be more difficult for Intuitive to grow than it would be for a smaller competitor such as Titan Medical -- Titan's market cap totals about $120 million. So, holders of Titan or another small medical device company may have a better chance of seeing their investment double or triple on good news than holders of Intuitive shares.

And this leads me to the next problem Intuitive faces. In spite of its market leadership, some investors still may consider Intuitive too expensive right now. Intuitive shares have gained 30% this year. Right now, they're trading at 71 times forward earnings estimates. That compares to a forward price-to-earnings ratio of 28 for nearest rival Stryker Corp. Of course, even as the world's second-biggest player, Stryker only holds 9% of the market compared to Intuitive's 79%, a BIS Research report shows. But investors may like the fact that Stryker offers growth potential -- and at a better price. All of this means Intuitive's success over the past few years actually may make it more difficult for the stock to deliver major returns now and into the future.

It might seem impossible to bridge the divide between these two views. One says that Intuitive Surgical is only in its early innings of growth, while the other maintains that the company has limited growth potential.

However, the bullish and bearish takes agree on Intuitive's market position and the long-term opportunities for robotic surgery. The primary areas of disagreement are on whether or not Intuitive's valuation and competition could limit its potential in comparison to other companies.

Even a raging fan of Intuitive Surgical would acknowledge that a smaller player such as Titan could have more room to run than Intuitive will. And you don't have to dislike Intuitive to believe that a large company like Stryker could build on its success in robotic surgery. On the other hand, someone with a bearish view about Intuitive would also likely agree that the company's huge install base and track record give it significant competitive advantages.

Some investors believe that Intuitive Surgical won't be as big a winner as other rivals. Other investors think that Intuitive's juggernaut in the market will continue. The bottom line, though, is that the opportunities in robotic surgery are great enough to support multiple winners.

3 Growth Stocks With More Potential Than Any Cryptocurrency
405%