The stock market has been on fire in the past year with the S&P 500 climbing more than 30%. And some stocks have actually performed a lot better. Case in point: shares of medical devices specialist DexCom (DXCM -1.15%) have soared by 86% in the trailing twelve-month period. That's a fantastic performance by any metric, but that could just be the beginning. There are excellent reasons to think DexCom could significantly outperform the market in the next decade. Here are three reasons why. 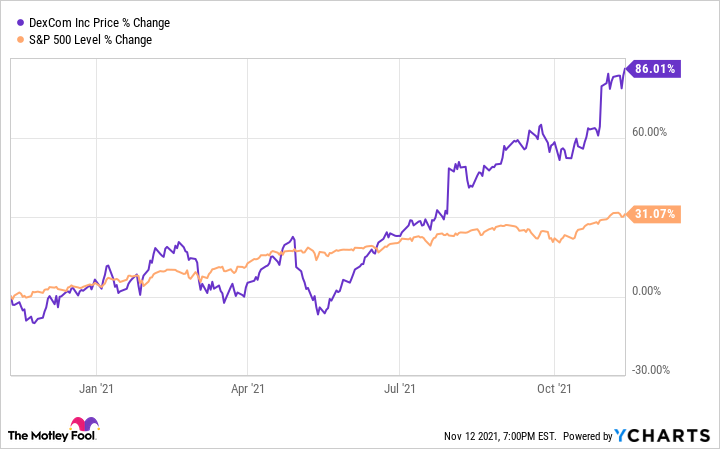 DexCom's goal is to improve the lives of diabetes patients. The company's flagship product is the G6 Continuous Glucose Monitoring (CGM) System. This device helps those with diabetes keep track of their blood glucose levels. CGM devices offer several advantages over the traditional method of measuring one's blood glucose levels. Key among them is that they don't require finger sticks that pierce the skin, so CGM devices are less painful.

Second, while finger sticks measure a patient's blood glucose level at a single point in time, CGM devices do so continuously. Hence the name. These nifty machines can automatically alert patients when they fall outside of their target glucose range thanks to the many measurements they make. DexCom's G6 records 288 per day -- or one every five minutes.

Third, CGMs lead to better outcomes for diabetes patients, including more time spent within their target glucose range and fewer hypoglycemic incidents, which happen when a patients' blood glucose level drops too low. It's no surprise then that there has been a sharp increase in the adoption of CGM devices among diabetes patients in recent years. 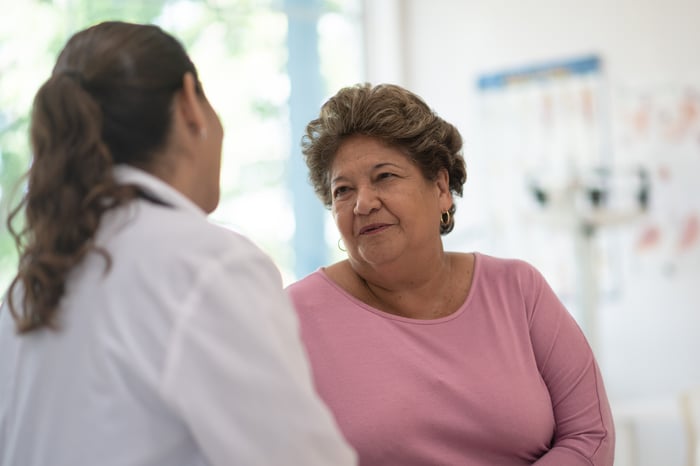 Yet there remains a significant runway for growth in CGM use. In the U.S., DexCom believes there is less than 50% penetration among type 1 diabetes patients and less than 25% for type 2 diabetes patients. The U.S. is the worldwide leader in CGM adoption, which means the opportunity internationally is huge. And that's before factoring in the rapid increase in the number of diabetics over the past few decades, a trend that is expected to continue. In short, the opportunities for DexCom to grow its base of users are massive.

Naturally, DexCom isn't the only company looking to cash in on the CGM space. It competes with medical device giants such as Medtronic and Abbott Laboratories, among others. According to some estimates, the CGM market generated $4.7 billion in revenue in 2020. DexCom is unquestionably one of the leaders with an estimated 41% share of the total CGM market.

DexCom makes most of its money by selling its G6 CGM system along with its accessories  (such as replaceable sensors). The rest of its revenue comes from previous versions of this device, such as the G4 and the G5. Last year, the company racked up $1.93 billion in revenue -- a 31% year-over-year increase -- and more than 90% of it came from sales of the G6 system.

The company is looking to maintain its solid position in this segment through innovation. The medical devices specialist is working on the G7, which it says will be smaller than its predecessor, among other upgrades.

DexCom's results for the third quarter ended Sept. 30 were solid. Revenue jumped 30% year over year to $650.2 million while adjusted earnings per share (EPS) dropped to $0.89 from the adjusted EPS of $0.94 it recorded during the year-ago period, Still, that came out above the consensus analyst estimate of $0.64.

While a single quarter doesn't tell a whole lot about a company's general financial performances, DexCom's record speaks for itself. The company has generally recorded improving revenue, as the following graph shows. While the bottom line hasn't been as impressive as its top line, rising sales of the G6 over time should help improve earnings. DexCom's business model has, thus far, worked pretty well. 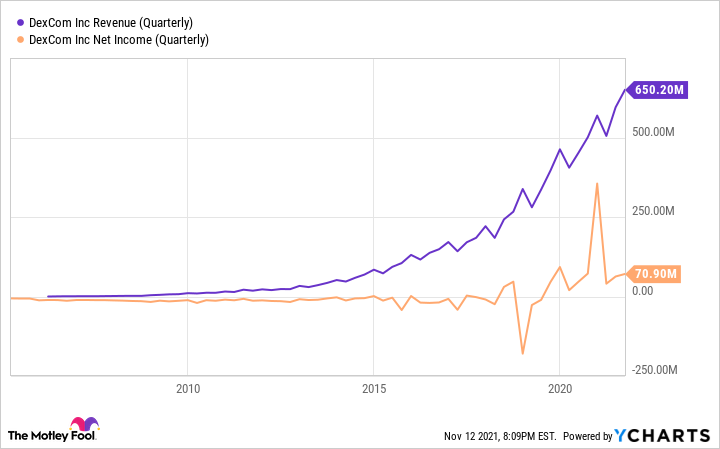 Wall Street is currently not very bullish on DexCom. Its average price target of $636 implies a drop of a little over 2% from its current stock price of $651. Some analysts may feel that DexCom's shares have outpaced its intrinsic value in the past year -- with its stock having soared by more than 90% in the past 12 months -- and that it is likely to be volatile in the period ahead. Indeed, failure to meet sky-high expectations when it reports quarterly results could hit the company's shares hard. That's what happened when it released its first-quarter update.

The company's valuation is also through the roof with a price-to-earnings ratio of nearly 120, and so that is something else investors should consider. Further, DexCom will continue to compete with Medtronic, Abbott Laboratories, and others in this crowded space.

That said, I believe DexCom remains an attractive option. Lofty valuation metrics tend to be the norm for high-growth stocks and despite the competition, the company has managed to carve out a solid piece of this market for itself. Given how underpenetrated the CGM market is, there is enough space for multiple players.

In short, those focused on holding shares of great companies for the long-term should consider DexCom. The company's strong position in an industry ripe for growth, coupled with steadily improving revenue, makes it an excellent healthcare stock to add to your portfolio.

2 Breakout Growth Stocks to Buy for the Long Haul
405%