Since February, the broader cannabis market has seen a decline in stock prices, following a boost from the anticipated U.S. federal legalization of cannabis as the Biden administration stepped into office. A Congressional infrastructure bill passed on to President Biden this past week includes a proposal to allow cannabis scientists to purchase product from local dispensaries for research, rather than relying solely on government-grown cannabis.

But it could be too little too late for the stock of some cannabis operators, like Canada's Hexo (NASDAQ:HEXO), which was recently in the spotlight after auditors from PriceWaterhouseCoopers LLC raised "substantial doubt about Hexo's ability to continue as a going concern." Whether the company will have the financial resources to grow and provide a rebound in its stock price has some investors wondering what might be next for Hexo. 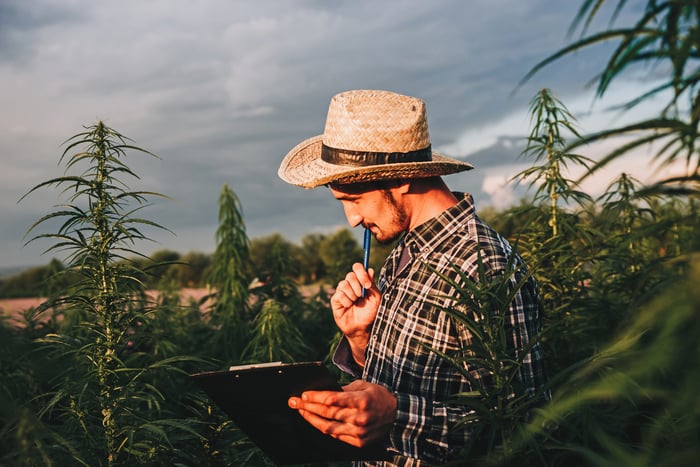 A healthy collaboration leads to expansion

Hexo touts itself as an award-winning licensed producer, offering cannabis products, including dried flower, pre-rolls, oils, topicals, edibles, and CBD-infused beverages. Though the flower market in Canada leads the way for cannabis products at 52% market share, the global CBD beverage market offers strong potential for Hexo, as it's projected to be valued at $14 billion in five years as a result of a 27.5% compound annual growth rate over that span.

So, the opportunity is there for Hexo to grab a share in that market through its joint venture -- Truss CBD Beverage Company -- with American-Canadian multinational beverage company Molson Coors Beverage Company. The problem is the infused beverage market has not taken off as it was projected to a few years back. In 2020, cannabis beverage sales in Canada accounted for only $28 million of the total legal marijuana sales of $2.6 billion in the country -- barely more than 1%.

But the good news is 2021 is on pace to beat out those 2020 numbers. Through the first half of the year, infused beverage sales reached $24 million, putting it on pace to nearly double last year. Now, Hexo is looking toward expansion into the U.S. market for CBD-infused beverage sales. The company purchased its first U.S. production facility in June, located in Colorado, where it will create Truss CBD-infused beverages and have the capacity to produce a full range of cannabis products. The Colorado launch expands the availability of the Truss Veryvell line of beverages to 17 states across the U.S.

Cloudy skies could cause investors to take shelter

Combined with the acquisition of Redecan earlier this year, Hexo is on pace to achieve its goal of being a top-three recreational cannabis producer in Canada. Being a top producer resulted in the company's fiscal year fourth-quarter earnings report on October 29, highlighting its best quarter of sales to date, reaching $38.7 million, a 71% sequential quarter increase, and a 43% increase over the same period in 2020. Part of what contributed to the record sales was an increase in beverage sales. Cannabis beverage net revenue increased 70% on a sequential quarter-over-quarter basis and 161% from fiscal 2020.

Where the news gets scary for investors is in analyzing -- from Q3 to Q4 -- revenue and operating expenses. Net revenue from the sale of goods increased by $16 million, but operating expenses rose by $39 million, contributing to total net loss jumping from $20 million to a net loss of $68 million.

More fear set in among investors due to comments made by the company's auditor PriceWaterhouseCoopers LLC (PWC). In a six-page report filed along with the FY 2021 Q4 financial results, PWC noted that Hexo's financial liabilities will require the company to spend "significant cash outflows over the next twelve months" and that operational cash flow will fall short of what is needed to meet debt under a senior convertible note.

The next step could be make-or-break

Ultimately, Hexo stock could benefit from being a buyout target for a larger competitor or possibly an increased stake from Molson Coors, as we've seen with Canopy Growth Corp in its relationship with Constellation Brands, which owns 38.6% of Canopy. This scenario doesn't always benefit investors with a boost in stock price but does allow for an injection of funds to the company, which can help boost investor confidence that the company can continue on its path, backed by its record quarterly sales.

Two of the leading cannabis producers in Canada, which could make a move for Hexo, are Canopy Growth and Tilray -- the latter of which became the biggest Canadian producer by revenue when it joined forces with Aphria. Tilray also has ties to globally known beverage maker Anheuser-Busch. Both of these competitors offer additional inroads to the edibles and beverage markets and the potential for growth in the U.S. market upon federal legalization. The relationships with competing beverage makers could make it interesting but not out of the realm of possibility.

As the stock price claws its way above an all-time low of $1.46, current investors probably want to hold on at this point, looking for a stronger boost in stock prices across the broader cannabis market, which has been happening of late. And if buyout talk of any sort were to hit the rumor mill, it's possible that gain could be much bigger.