Shares of Destination XL (NASDAQ:DXLG), which sells large-size menswear, fell sharply on Nov. 18, dropping as much as 17% at one point in morning trading. By roughly 11:30 a.m. ET, the stock had recovered somewhat to just a 4.5% decline, which isn't so bad. But it's still important to look at what might have gotten investors so unnerved.

Destination XL reported earnings after the close on Nov. 17. On the surface, the news was fairly positive for the men's retailer. Sales rose 42.6% in the third quarter of 2021 compared to 2020 and were even up 14% compared to Q3 2019. Comparable-store sales, looking at stores that were open in both 2021 and 2019, were up 22.9%. On the bottom line, Destination XL earned $0.20 per share in Q3 compared to a loss of $0.14 per share in the same quarters of both 2020 and 2019. Basically, it was a pretty good performance, buttressed by the company increasing its full-year guidance for sales and earnings. 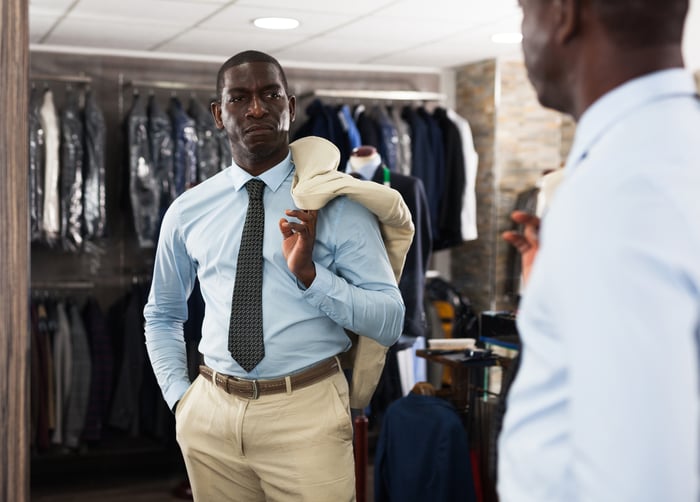 The only negative here appears to be more in the trend lines. Indeed, sales have increased sequentially since Q2 2020 up until this quarter, breaking a positive uptrend. While Q4 2021 is likely to be a relatively easy comparison next to to the pandemic-impacted fourth quarter of 2020, it could be that the sales recovery here has largely petered out. Doing some back-of-the-envelope math, using the company's new full-year sales guidance of $500 million to $510 million and pulling out the roughly $371.6 million in sales through the first nine months of 2021, the fourth quarter's top line appears like it will be almost flat to down 7% compared to Q2. If holiday-season sales are only as good as the second quarter's sales, that's not so great. When you look at the third quarter from this perspective, perhaps it wasn't all that good after all.

There are a lot of moving parts at Destination XL right now. And investors have a lot of information to digest, including the fact that management believes it will have enough inventory for Q4 but still warned about potential supply disruption risks. Given the change in direction on the top line this quarter, it's perhaps understandable that investors were initially put off. That said, the strength of the quarter on a year-over-year basis seems to have helped soften the Street's harsh reaction.