It's been a good year for Kroger (NYSE:KR), whose share price is, as of this writing, up nearly 29% over the past year. But to keep up its momentum, the supermarket giant will need to do more than just continue to offer a wide range of goods at competitive price points. It'll also need to embrace a key trend that's emerged during the pandemic: grocery delivery.

Online grocery orders exploded in 2020 when shoppers opted to stay home and have food brought to their doors instead. Now, consumers fears may not be driving that trend so much as the convenience factor.

Buying groceries takes time, so at this point, it's a task many consumers would much prefer to outsource. Now, Kroger is taking aim at a new market. And it's doing so without so much as having to open a single store in the vicinity. 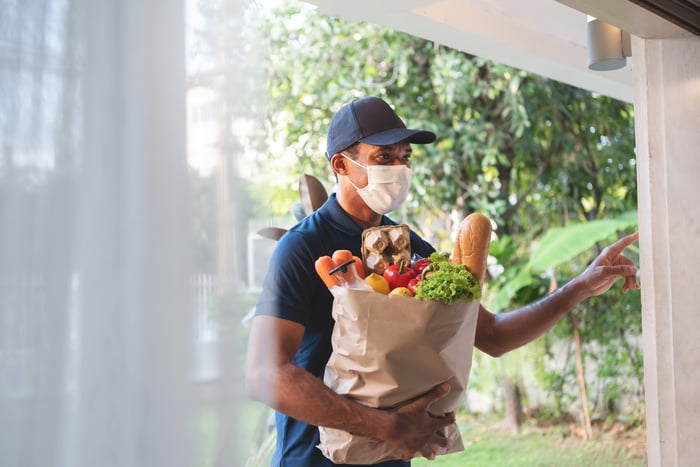 It's all about automation

Kroger wants to expand its footprint in Florida, but the grocery giant intends to do so by offering up its stock on demand rather than building a supermarket for shoppers to visit. To date, Kroger has invested at least $55 million in a giant warehouse that will be set up with robots to can procure items quickly and efficiently.

So far, Kroger has hired 900 employees, and that number could grow as operations scale up. Though robots will do much of the heavy lifting in Kroger's massive facility, its new venture will also be heavily reliant on delivery drivers to bring orders to customers' doors.

Kroger may be a well-recognized name in parts of the country, but Florida is pretty much foreign territory. But whether its first foray into the Sunshine State is successful will hinge on how well it's able to market its new service -- especially in an area where it hasn't yet established a presence.

Still, Florida is very much a snowbird state, so there's a good chance some consumers will be familiar with the Kroger brand. And since Florida also tends to be a hub for retirees, this new delivery service could end up very much in demand among consumers with mobility challenges.

Though Kroger has almost 2,800 stores across 35 states, in Florida, it only has a single location, near the Georgia border. By busting into Florida, Kroger could shake up the local supermarket scene -- and eventually grow to become a key player.

But if anything, that should be a positive thing for real estate investors. The grocery industry is fairly recession-proof, and there's room in Florida for another key player to enter the fold. And if Kroger's new model is successful, it could create many more jobs and opportunities in a state it's never really targeted before.

Furthermore, if Kroger decides to expand to physical supermarkets in Florida, it could be a very positive development for commercial landlords desperate for shopping center anchors. And so while Kroger may be taking a somewhat unconventional approach to introducing its brand to a new market, it's also poised to enjoy a lot of success by capitalizing on a growing trend.