After what seemed like an eternity of selling (but really just a couple of weeks), Shiba Inu (SHIB -1.60%) has returned to form. This popular meme token has soared more than 20% higher over the past 24 hours, as of 10:30 a.m. ET.

In the cryptocurrency space, many investors are after lottery ticket-like returns. And Shiba Inu hasn't disappointed them in this regard. On a year-to-date basis alone, investors who have held this token now have gains of more than 55,000,000%. Accordingly, today, it appears sentiment is once again turning ultra-bullish on this meme token.

As fellow Fool contributor Sean Williams recently pointed out, Shiba Inu is approaching an important milestone later this month. It's expected Shiba Inu should hit 1 million investors at some point in the coming weeks. With concern around the concentration of SHIB held in just 10 wallets (roughly two-thirds of all Shiba Inu tokens), this is a big deal.

Additionally, some news surfaced this morning that Shiba Inu is already the largest holding among Ethereum whales. This suggests more capital inflows into Shiba Inu as the meme token of choice could provide additional momentum to this rally. 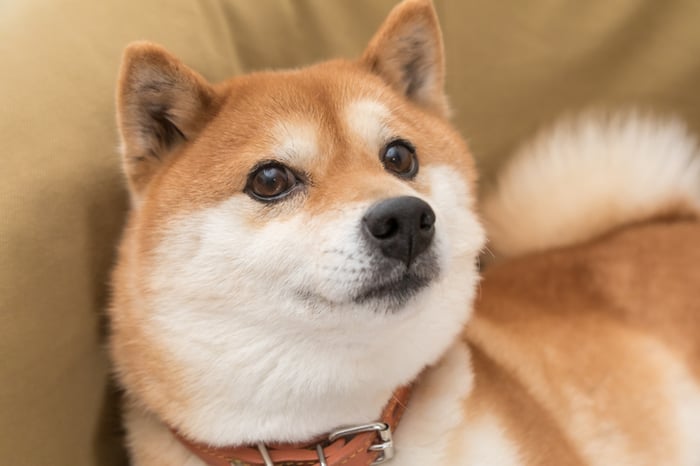 Momentum is the name of the game in the meme token space. And while it appeared for a second there that Shiba Inu had lost its mojo, this morning's rally suggests otherwise.

Speculative buying interest in the SHIB token appears to once again be surging. What this means for the near-term prospects of this token remains to be seen. However, it appears those holding the SHIB tokens aren't selling right now. For those looking to get in on this Ethereum-based ERC-20 smart contract token, that's a rather enticing backdrop.

Shiba Inu remains one of the most speculative digital assets right now. Accordingly, investors have reason to take a cautious approach to this space.

However, there's something to be said about scalping a quick gain. There's an appetite for that right now. Accordingly, this is a token that looks like it could be on another fantastic run.

Just how long and protracted this run could be is unknown. However, this is certainly an asset with a tremendous amount of momentum right now. Accordingly, Shiba Inu will certainly be an intriguing token to watch over the weekend.