Untouched by the pandemic or inflation, the high-class conglomerate has rivals on the run.

LVMH's (LVMHF 3.25%) pandemic performance demonstrates why decisive action in times of uncertainty may be better than waiting it out and playing it safe. This luxury-brands giant remained active during the pandemic with new ventures instead of taking it slow.

The pandemic would initially seem like a period of stagnation for luxury goods, since there isn't much opportunity to wear them. However, the luxury industry as a whole has been hitting sales goals while brands continue to raise prices. The already high price point of luxury may have insulated it from everyday consumables like groceries and gas, which have suffered the slings and arrows of inflation. 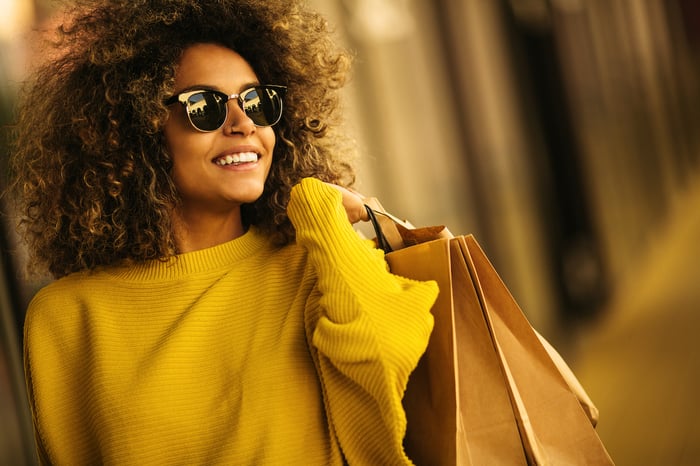 This year, the 200th anniversary of the birth of Louis Vuitton, LVMH has recorded 46% revenue growth in the first three quarters after a record first half that saw organic growth of 81% in its largest business group, Fashion & Leather Goods.

During the pandemic, LVMH invested in two prominent luxury brands. It bought Tiffany in January 2021, strengthening LVMH's jewelry business with the addition of one of the world's most storied jewelry brands. In August 2021, LVMH went in a different direction by taking a majority stake in Off-White, a pioneering streetwear brand. These two brands are emblematic of the diversification LVMH has built into its operations, making sure its brands can appeal to consumers with classic and avant-garde tastes alike.

LVMH has a stronger financial position than its luxury conglomerate rivals, Gucci owner Kering (PPRUY 2.01%) and Cartier owner Richemont (CFR 1.06%), and it's thrown that cash behind marketing for social media campaigns, advertising, and in-person experiences. Flying in the face of attitudes about the death of retail, LVMH spent $894 million restoring La Samaritane, a historic Parisian department store shuttered in 2005 for safety reasons. The 16-year renovation finally came to an end this July, at an inauguration attended by French President Emmanuel Macron. This type of bold, no-holds-barred investment in its own image connects to the psychology behind luxury consumption, which is based less on practical and objective judgement than other forms of consumption.

Earlier this year, it was reported Kering's CEO had directly approached Richemont's controlling shareholder about a merger proposal. Kering is strong in fashion and leather ("soft luxury"), while Richemont is strong in watches and jewelry ("hard luxury"). In the face of a massive rival like LVMH, combining these businesses makes sense strategically.

UBS said a merger would create a luxury powerhouse capable of challenging LVMH: "Combining the two mega brands of the soft and hard luxury industry, Gucci and Cartier, could address the perceived higher fashion risk of Kering and the perception of mismanagement of Richemont's smaller brands in its portfolio." UBS's view suggests that LVMH outperforms its rivals because all segments of its business are in top form, while its rivals each have a major business area which needs work.

LVMH's strong performance this year -- the stock is up 33% -- relied heavily on Chinese consumers. In Q3, China saw the biggest overall growth of all of LVMH's regions, with 26% of total revenue. Although LVMH's sales have not yet been hit by the Chinese government's growing focus on wealth redistribution, this may pose a future threat to its revenue. Additionally, recent increases of coronavirus restrictions in China hurt sales in Q3 and could further hurt sales in Q4 depending on the local health situation.

Another potential issue LVMH could face in the future is supply chain issues. As a retail giant with complex sourcing, production, and shipping systems, the company needs a healthy flow of raw materials and finished products. But right now, "We are not worried about manufacturing," CFO Jean Jacques Guiony said on the company's Q3 earnings call. "The only thing that could cause missing sales would be if shipping capacities would go down for any reason. However, we do not anticipate that, so see no reason for concern."

LVMH, Kering, and Richemont have all performed well during the pandemic, with no signs of stopping. Mastercard has projected that luxury purchases this holiday season will be 93% higher than last year's, and up 56% from 2019. Consumer appetite for luxury is expected to grow even more as reopening progresses, with Bain seeing global sales of personal luxury goods surpassing pre-pandemic levels this year. However, LVMH's built-in advantages from having strong business segments across the board, combined with its vast financial resources, place the company in a league of its own compared to the more volatile Kering and Richemont stocks.

How Tiffany Made $15 Million From Cryptopunk NFTs

As Macy's and Sephora Flee the Mall, Will Other Retailers Follow?