Shares of Splunk (NASDAQ:SPLK) had fallen 18.9% this week as of Thursday's market close. The reason was very clear: On Monday, the company announced CEO Doug Merritt would be stepping down after six years on the job. Chairman Graham Smith will take over as interim CEO, as the company conducts a search for its next leader.

The market never likes to see a CEO step down, or any sort of uncertainty in the C-suite. Management shuffles could indicate that the board believes the company is underperforming and needs to correct current problems.

On the other hand, Splunk also preannounced solid third-quarter results, so there are definitely mixed messages here. 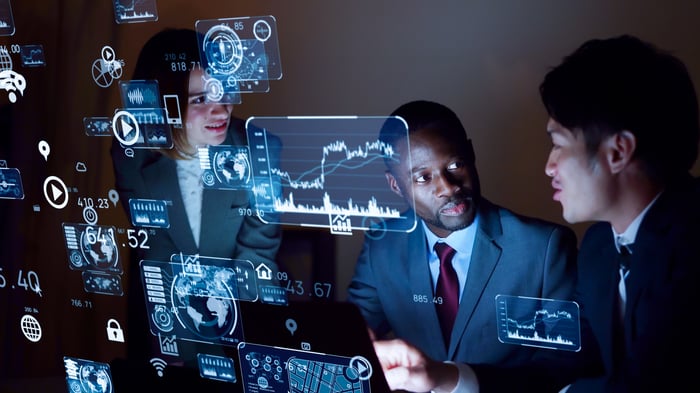 It should be noted that Merritt wasn't the founder of Splunk; he had been CEO for only six years and with the company for eight. Splunk, a leader in observability, IT monitoring, and security for large enterprises, was founded back in 2003.

Still, it is a bit curious that Merritt is resigning, or that the board decided to change things up. The company has grown revenue nearly tenfold during Merritt's tenure, and is currently in the midst of a transition away from selling perpetual licenses to be deployed on premises to a cloud-based SaaS (software-as-a-service) model. That transition has depressed revenue over the past couple years due to accounting conventions, but it appears the company is getting through it rather well. Splunk has beaten revenue expectations each of the last three quarters, and the percentage of bookings coming from cloud subscriptions recently passed the 50% mark.

Additionally, the company guided for a fourth consecutive revenue beat in conjunction with the announcement. Management is now guiding for revenue of $660 million, ahead of current estimates of $646.5 million. Total annualized recurring revenue is set to rise 37%, and cloud-based revenue is forecast to be up 75%.

So, is the current sell-off an opportunity, or a warning? It's not obvious, but I'd lean toward the former.

Splunk received a $1 billion investment from tech-oriented private equity firm Silver Lake in the second quarter, and Silver Lake also received a seat on Splunk's board. The transition may have been initiated by Silver Lake, or perhaps the equity firm was brought in because the board was already considering a change. As Splunk becomes more focused on the cloud, it may seek out a leader with expertise in that area. Perhaps the board thinks the company can move through its transition even faster.

Still, there was certainly nothing apparently wrong in Splunk's recent financial results, so I'm leaning toward this being an opportunity. Splunk is still well below the all-time highs it set back in 2020, and it trades cheaply compared with other leading software companies today, at least in terms of a multiple of sales.

Risks of a business-model change certainly came to the fore this week. But if the company attracts a high-quality CEO, Splunk could be a great turnaround candidate in 2022.