Adria Cimino and Patrick Bafuma
(TMFAdriaCimino)
Author Bio
Adria Cimino grew up with her nose in a book and a love of storytelling. By a twist of fate, she started her career writing about biotech in Boston and discovered that each company is the source of many fascinating stories. Prior to joining The Fool as a contract writer focused on healthcare and consumer goods, Adria covered the stock market for Bloomberg News in Paris. When she’s not analyzing companies, she can be found writing fiction or trying to speak French as well as her 9-year-old daughter.
Follow @adria_in_paris

Vertex Pharmaceuticals (NASDAQ:VRTX) and CRISPR Therapeutics (NASDAQ:CRSP) each have their own strengths. Vertex has developed a blockbuster portfolio of cystic fibrosis (CF) treatments. CRISPR is working on gene-editing treatments for a variety of serious diseases. These two companies have even joined forces for one major program. So which one of these innovative biotech players makes a better buy right now? Let's find out. 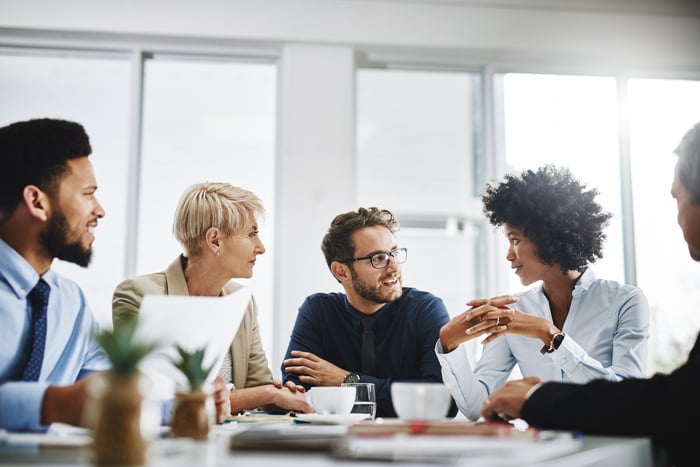 Adria Cimino (Vertex): I like Vertex Pharmaceuticals for its market leadership today in CF, and its potential to bring blockbusters in other treatment areas to market in the future. First, let's look at today. The company brings in billions of dollars in revenue and profit annually through sales of four CF drugs. And the biggest threat to these drugs is actually a candidate that Vertex has in development. So, it doesn't look like another company will unseat Vertex any time soon. Vertex has even said its leadership likely will last through at least the late 2030s.

Now, let's look to the future. Vertex has several candidates in the pipeline in various treatment areas. I'm most focused on two that could be gamechangers. That's because they are addressing illnesses with limited treatment options. I'm talking about CTX001, an investigational one-time curative treatment for blood disorders, and VX-880, for the treatment of type 1 diabetes. The biotech company has reported positive clinical trial data for both.

The VX-880 report only included the first patient from a phase 1/2 trial -- so it still is early stage. But CTX001 -- its collaboration with CRISPR -- is advanced. In fact, the company said in its recent earnings report that it aims to file for regulatory approval at the end of next year.

If all goes smoothly for CTX001, the shares could soar. Here's why. Investors today worry about Vertex's ability to succeed in an area outside of CF. A victory for CTX001 would prove that Vertex can indeed expand beyond its core program. And this potential product could generate billions in revenue -- $1.3 billion in 2026, according to EvaluatePharma. Right now, Vertex shares are trading at only 14 times forward earnings estimates. That looks like a bargain considering Vertex's earnings today -- and the company's prospects down the road.

Patrick Bafuma (CRISPR): Any basket of investments in the future of gene therapy needs to give strong consideration to CRISPR Therapeutics. While the two-horse race with Bluebird Bio (NASDAQ:BLUE) for a gene therapy to treat sickle cell disease appears to be neck and neck, CRISPR Therapeutics may have taken the lead. With Bluebird Bio aiming for an early 2023 FDA submission, the Swiss biotech (with partner Vertex as mentioned above) is charging ahead with hopes of a late 2022 submission.

Even with two options for patients, the cost of the one-time treatment is likely to surpass $1 million. But it is a market big enough for two players -- especially with an estimated 100,000 Americans living with this painful, burdensome, and life-threatening disease, according to the Centers for Disease Control. And while CRISPR will split costs and profits 40/60 with Vertex, 40% of a blockbuster means more to shareholders of the $6.3 billion biotech without a drug on the market than 60% does to a $47 billion dollar pharma that is on pace to bring in $7.4 billion in revenue this year.

A recently reported phase 1 study suggests similar efficacy to currently available CAR-T treatments for certain types of blood cancers like B-cell lymphoma, but with an improved safety profile. Further registrational studies starting in first-quarter 2022 may set up CTX110 for an FDA approval, putting CRISPR on a crash course with Gilead Sciences' Yescarta -- which is already approved in third-line or better lymphoma. Yescarta, the first-ever approved CAR-T treatment for cancer treatment, generated $178 million in sales in the most recent quarter -- representing 27% growth year over year for the quarter.

The cutting-edge biotech is swinging for the fences -- and its share price will likely reflect this over the next few years. The initial addressable market for sickle cell gene therapy in the U.S. is in the tens of billions of dollars -- not a bad first drug to market. With a better side effect profile and easier logistics than current CAR-T options, CTX110 may become a blockbuster if current trial data is replicable.

And we have not even talked about the first-ever gene-edited cell replacement therapy clinical trial for the treatment of type 1 diabetes in partnership with ViaCyte. This exciting phase 1 trial is set to begin in Canada by the end of 2021. Investors have a chance to get in early on not one, but three groundbreaking therapies -- and the accompanying share price appreciation.

So is it Vertex or CRISPR?

I agree with Patrick's point about potential sales for CTX001 being a bigger deal for CRISPR than for Vertex. A first product to market for a company is always significant -- especially if it has blockbuster potential. Investors who aim to buy during the early days of a growth story -- and have tolerance for risk -- may prefer this biotech stock. But for those who like the security of an already established program and potential for future growth, Vertex might be the better option.