There's more to this potential coronavirus vaccine stock than what happens in the next 12 months.

When it comes to contentious stocks, Ocugen (OCGN 8.66%) is likely one of the market's leaders. The company is trying to commercialize its coronavirus vaccine candidate and it also boasts long-term growth potential stemming from its group of gene therapies in development for ocular disorders. It's easy to see why there's so much interest in its worthiness as an investment.

With a market cap of only $1.6 billion, it could have a massive amount of room to run. Let's take a look at one argument in favor of buying Ocugen stock and one argument against it to get a better sense of whether it'd be a good pick for your portfolio. 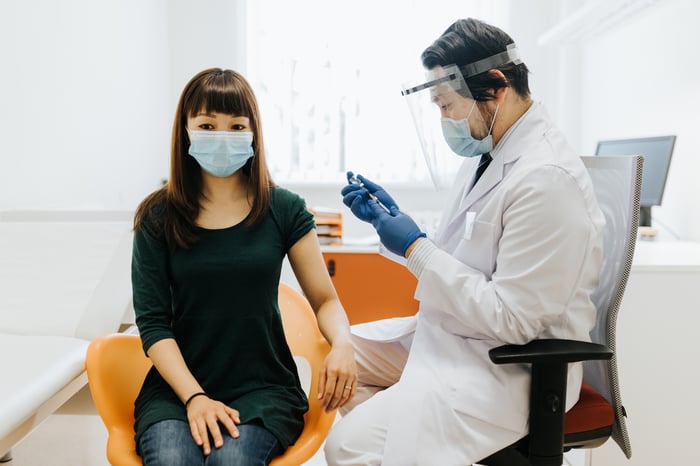 Patrick Bafuma: Ocugen is undervalued and underappreciated compared to its peers.

First, let's talk Covaxin. The fledgling biotech's COVID-19 vaccine candidate has already been filed for Emergency Use Authorization (EUA) in the U.S. for patients aged two to 18 years.  Not only is this a younger age group than the Moderna (MRNA 0.15%) and Pfizer (PFE 1.06%) mRNA vaccines have been cleared for, but it's also a different form of vaccine altogether.

Covaxin uses an inactivated virus platform -- the type we all grew up with and has been used for decades in the pediatric population. Sure the two mRNA vaccine makers have quite a head start, but with a $1.7 billion market cap, it won't take much revenue to make an impact for Ocugen. Despite concerns about decreased efficacy and an increased risk of certain types of rare blood clots, even Johnson & Johnson's (JNJ 0.12%) single dose, non-mRNA, adenovirus-based vaccine generated $421 million in the U.S. through the first nine months of 2021. People who are hesitant about clotting risks and the decreased efficacy of the Johnson & Johnson vaccine, as well hesitant over the novelty of mRNA vaccines might be willing to accept the OcuGen jab. Plus with being able to be stored for approximately two years at 2° to 8° C and three months at room temperature, Covaxin is easier to be given in doctor's offices.

But ultimately, any COVID-19 vaccine money is likely a pathway to fuel its goal of becoming an ocular gene therapy solution. The company believes it can treat multiple types of genetic retinal degeneration with a singular drug. In advanced disease, these rare disorders of the eye can cause blindness, but Ocugen's lead therapy OCU400 aims to change that. And the approach of a single medication to treat multiple rare genetic eye diseases might be a better business plan than competitors going after them one at a time.

Utilizing the well-studied adenovirus delivery system, early studies in mice suggest OCU400 could stop disease progression and rescue vision in both early and advanced stages of disease. If -- and it's a big if -- it can replicate this in human trials, it will be more promising than Nightstar Therapeutics when it was bought by Biogen for $877 million in 2019. In those Phase 1/2 trials, Nightstar's treatment was not curative, only showing signs of improved visual acuity in some patients and possibly slowing down disease progression.  Spark Therapeutics, bought out by Roche for $4.8 billion in 2019 after its rare eye disease therapy was approved, was going after rare genetic ocular diseases one by one.

Ocugen has a better mousetrap than other ophthalmic gene therapy companies today and is a fraction of the price. Plus it has potential vaccine revenue that is near EUA to alleviate costs of research and development.

Alex Carchidi: Ocugen's coronavirus vaccine could be a winner for shareholders, but it'll have to overcome a couple of key obstacles which I doubt that it will.

Most importantly, its Covaxin jab is only licensed for development in the U.S. and Canada. Both of those markets are already crowded with highly effective products from powerful competitors like Pfizer, Moderna, and Johnson & Johnson.

And, by the time Covaxin is approved for sale, Ocugen might be competing against other vaccine latecomers like Novavax too. It might be hard for Ocugen to sell its product to the U.S. and Canadian governments, which have already been establishing purchasing agreements with major manufacturers for over a year.

Of course, that's assuming Ocugen's jab is approved at all, which isn't guaranteed. Because it's relying on Bharat Biotech's clinical trial data rather than conducting its own studies on efficacy in people aged two to 18, regulators in the U.S. may be inclined to reject Ocugen's petition for an Emergency Use Authorization (EUA) for children. A request for more data wouldn't mean that Ocugen's jab is doomed, but it would almost certainly deliver a body blow to the stock.

The other issue is that Covaxin is formulated against the original SARS-CoV-2 virus rather than the destructive Delta variant, thereby likely making it only 65.2% effective. The same is true of the company's competitors, but especially for heavyweights like Moderna and Pfizer, variant-specific vaccine candidates have been in the works for quite some time already.

So, they'll likely be releasing anti-variant booster shots while Ocugen is likely to commercialize its jab against the original version of the virus, assuming that it'll need to perform a few more clinical trials before getting an EUA from regulators. That won't be favorable for its sales potential, to say the least.

Aside from these issues that could impede the timeline for the adoption of its jab, Ocugen has all of the standard risks, issues, and disclaimers of every early-stage biotech company. While its ocular gene therapy platform could one day yield high-value programs, for the moment, it's entirely unproven. The company doesn't have any commercial-stage programs that were developed internally, which means that investors take on a very hearty helping of risk from potential failures during the clinical development process. It'll be years before any of its in-house programs even have a chance to yield revenue, if they ever do.

This stock isn't for everyone

It's entirely possible that investors will see Ocugen's stock soar as a result of its vaccine work, and the company could easily use the revenue from jab sales to finance the buildout of its gene therapy pipeline programs down the line.

Therefore, it's a great option for people looking to make a speculative purchase. But, in light of the difficulty that it'll face in grabbing market share and its lack of mature pipeline programs, more conservative investors should probably clear of this stock in favor of something less risky.