Bitcoin's (BTC 0.61%) value in U.S. dollars has reached all-time highs in recent weeks. As the price climbs, so does the Bitcoin network's hash rate -- or the computing power being used to verify transactions and mine new Bitcoin.

But what exactly is hashrate, and does it matter? Here's what you need to know. 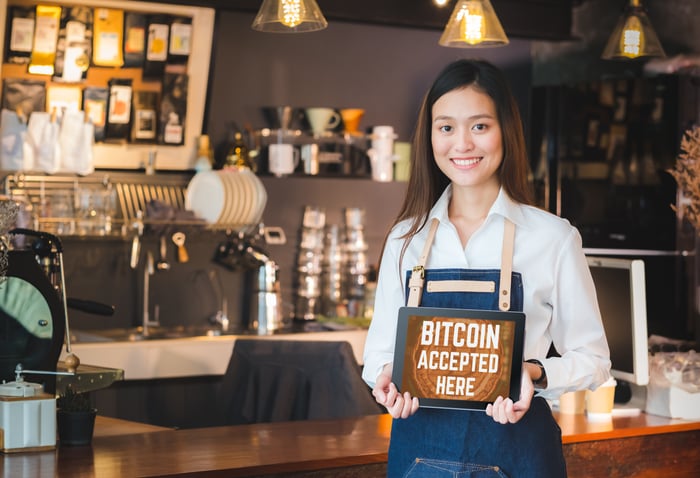 Bitcoin hashrate and mining on the rise

For a proof-of-work cryptocurrency like Bitcoin, hashrate is used to measure the total computational power being used to process transactions and mine new coins. Each transaction in a cryptocurrency network needs to be added to the digital ledger, or blockchain.

But before data on a transaction is recorded on the blockchain, miners (the powerful computers used to manage the network) need to guess an alphanumeric code (called a hash) representing the data from the transaction. Each hash is random and complex, so it takes significant energy to power these computers. Once miners solve the hash, a new block is added to the blockchain, and a new unit of digital currency is rewarded to the successful miner.

Besides Bitcoin, Litecoin, Dogecoin, and Monero all use the proof-of-work method to verify transactions and manage the blockchain network. Ethereum also used proof of work before switching to proof of stake. A proof-of-stake model does not use a hashing algorithm to manage a cryptocurrency network, instead awarding computing power and ability to earn rewards based on how much of the crypto a miner owns.

For those cryptos that do use a hash algorithm, why is hashrate so important? It's a measure of how many miners are involved in managing the network. And since Bitcoin and other cryptos are decentralized, the more miners that are involved, the greater the security of the blockchain network. Thus, hashrate will generally follow the price of a cryptocurrency. The higher the price, the more valuable the crypto reward -- which coaxes more miners into the business of managing the blockchain. 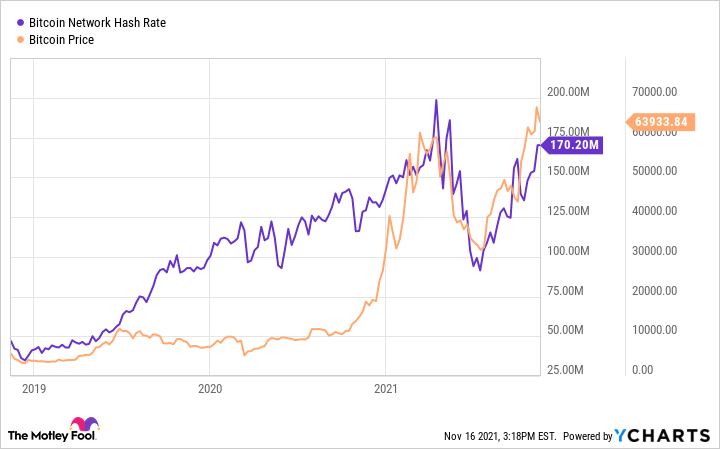 Other implications of hashrate

For Bitcoin specifically, the hashing algorithm difficulty adjusts up and down depending on how high the hash rate is. This is because creation of new Bitcoin was designed to be controlled over time. The more miners contribute power to the network, the higher the likelihood of new blocks being added to the blockchain. Thus, mining difficulty increases when hashrate goes up to keep new Bitcoin creation stable.

A rising hashrate for Bitcoin and other proof-of-work cryptos also has substantial energy consumption and environmental implications. Unlike traditional currency, digital currency requires computing power, which consumes energy (like from a local energy grid managed by a utility company) to manage the network and create new blocks in the blockchain. As more miners join the fray and hashrate rises, Bitcoin's global energy consumption grows, too. It has been estimated that Bitcoin management and creation currently consumes more electricity than some small countries, leading some to decry the digital currency's impact on the environment if it doesn't adjust the algorithm's computing process or miners don't switch to more renewable energy sources.

Hashrate is an important metric for proof-of-work-based cryptocurrencies. It's based on the number of miners involved in managing a crypto, which in turn is correlated to the crypto price (higher value means a bigger reward for mining) -- but also has other implications like environmental impact. For those interested in the crypto industry, hashrate is an essential metric to learn and follow.