Don't expect it to follow the trajectory of a hot growth stock.

As one of the world's largest manufacturers of generic medicines, Viatris (VTRS 0.17%) is a company that's appealing to investors of all stripes. With its massive portfolio of therapies and biosimilars, this business is willing to enter generic markets of practically any size all over the globe.

But given that it's unprofitable and heavily indebted, it simply isn't very impressive at first glance, which raises the question of why smart investors would approach it at all. Let's examine three tidbits that explain why this stock is worth talking about as an investment. 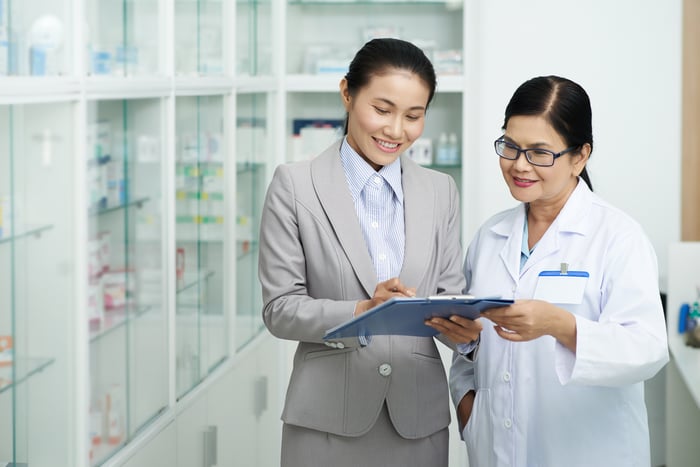 As critical as generic drugs are to the functioning of our healthcare system, generics aren't exactly hot sellers. While pharmaceutical companies can price a new drug to achieve the margin that they want to target, that's only possible for as long as they hold the exclusive legal rights to manufacture and sell the drug, which is typically for five years. After that, businesses like Viatris can come in and make a generic version of the drug.

But because anyone can manufacture a generic, competition drives prices down. So, the amount of money a generic manufacturer can make is more about how much demand there is for the drugs they're producing, and how cheaply they can serve that demand via their manufacturing operations.

And cooking up medicines at an industrial scale requires massive capital investment. Then, companies like Viatris can make their money back over the course of years, during which they hope to retain a share of the market from patients who need to take its drugs in perpetuity.

Smart investors aren't expecting Viatris' stock to hit the moon overnight because they know its business is more about winning the long game of slowly recouping capital expenditures than it is about any given quarter or any given year. With such a business model, the main appeal of Viatris' stock is about the reliability of its cash flows, which will likely eventually support a consistently growing dividend and regular share buyback programs -- if things go as management plans, at least.

2. The next few years are transitional

If you've been following Viatris, you know that the company is a newly formed entity that resulted from the combination of the drug manufacturer Mylan and the spin-off of Pfizer's generics business unit called Upjohn. The transaction concluded on Nov. 16, 2020, and Viatris started its life as an independent company. A year later, it's still finding its footing, and shrewd investors know that it'll probably take a few years more to do so.

Specifically, management is hoping to make progress on key issues like the company's debt load of $23.74 billion, which could be paid off by as much as $6.5 billion through the end of 2023. In the last 12 months, it repaid $6.09 billion, vastly more than its capital expenditures totaling $745.8 million. Until its debt is deleveraged even more, which management expects should be in progress through 2024, it's likely that Viatris will continue to see its growth potential hampered.

After 2024, however, Viatris should have enough leeway to start making major investments in research and development once again. And that will support higher stock prices unlike anything else the company has done so far, assuming that it can become profitable by reducing its cost of goods sold between now and then.

One thing that smart investors probably realize about Viatris' stock is that it's selling at a bargain right now.

The pharmaceutical preparations industry has an average trailing price-to-sales (P/S) ratio of 4.71, which is much higher than Viatris' P/S of 0.94. And its price-to-earnings ratio is 28.56, which is a hair lower than the industry's average of 29.37.

In short, this stock is selling for a discount relative to its peers. So, there may be some upside baked into its current valuation from its reversion to the market's average for companies like it over time. That probably won't be enough to make anyone rich, but it could provide a nice boost to people who invest in it now, when the company is still working toward becoming profitable.